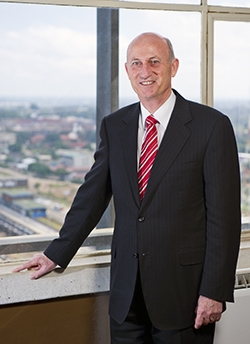 Bruce Dick was appointed Managing Director of Zambia National Commercial Bank (Zanaco) in January 2014. He had previously served as Chairman of the Board from 2010 until 2013, and has over 35 years of experience in retail and wholesale banking. Prior to taking up his role at Zanaco, he had been responsible for developments in retail bank investments throughout Sub-Saharan Africa and Latin America.

Last year marked a significant growth period for Zambia National Commercial Bank (Zanaco) in terms of number of customers, loan portfolio, and bricks and mortar development. To what do you attribute this performance?

Our performance in 2013 was marked by a couple of events. Business growth was strong, at approximately 20% across both business lines and, as you rightly pointed out, the number of customers increased. It is an ambition of the group to have a million customers by 2015. We have around 820,000 customers at present, meaning we are on track for achieving that. In 2013, we also completed a major IT upgrade for the bank, which took time and effort, but will generate positive results in the long term. Many of our customers want to bank with us because of their expectations of what we can provide, which creates a few headaches for us in terms of our branch network and distribution platforms. However, this is a good problem to have, because we are dealing with the challenges that this demand creates, but focusing heavily on customer service.

Does this level of demand signal branch-network growth?

Going forward, we realize that our strategy is not about more bricks and mortar, it is more about trying to develop better distribution channels. We approach this challenge through agents, and we always try to link up with agents that are within walking distance of a branch. This means that even if you cannot get served at a branch because it is too busy, clients can take a short walk to an agent’s office and complete simple banking transactions there. They cannot process a loan, but they can do pretty much everything else in terms of transactions. We have improved on our transactional banking facilities through products such as Xapit, which is a mobile banking product that provides basic functionality for sending money to accounts and paying bills. That basically means that you do not need more branches, but you do need to grow the agent network. We will continue to build branches; however, this will likely take two or three more years.

How would you assess the maturity of mobile banking in Zambia, and how significant is it for Zanaco?

It is generally known that Xapit was the first mobile banking-based application. It took off rapidly and has grown robustly ever since. In terms of penetration, you can still do more, and we have a financial inclusion goal, which means trying to reach out and bank the unbanked. By unbanked I do not mean unbankable; I am referring to the people who should have bank accounts but do not. We are not just taking anyone on board, but it does mean reaching out into rural areas. Urban banking is quite well catered for, as there are 19 registered banks in Zambia, of which four or five control about 80% of the market, and the rest compete over the remainder. If you live in a city or a major town you have pretty good access to banking, which is why our goal is in rural areas.

In 2007, Rabobank purchased 49% of Zanaco’s shares. What potential does Rabobank see in this purchase, and how does the situation of today compare?

In the late 1990s, there was a push from the World Bank to make governments, which they were previously funding, transform their commercial sector and get out of banking and sell off some assets that should be in private hands. When it came into the 2000s, Zambia and other countries started to reassess how they privatized these assets. They started off by selling a 49% offering, meaning the government still wanted to retain 51%. They were looking for partners that made a social offering as well as pushing the development agenda. In particular, they looked favorably on institutions that could positively support the rural sector and farming. Rabobank’s international activities were strongly linked to food and agriculture; it looked at countries where there was the potential to do more in the food and agriculture space. When it looked at Africa, it was clear that most of the continent can grow crops; yet, some places can grow more than others and have more suitable climates, better access to water, and more available land. From a food security point of view, to feed a population that is predicted to reach 9 billion by 2050, we basically have to double production. Sub-Saharan Africa has the available land; it is just under utilized. It is arable, and it can be used for agriculture in a productive manner to produce high yields.

Since that time, what would you say has been Zanaco’s impact on the agri-food space?

It has been significant because it came from virtually nothing when it started in 2007, but it now represents about 25% of our portfolio. We have an advantage partly because of the government shareholding, as we take a long-term perspective when it comes to agriculture. Agriculture is traditionally something that banks accommodate when conditions are good, and avoid during the hard times. We view it as a business of considerable volatility, but equally we think we have a unique knowledge and experience, and we are committed to the long term. Zambia is dominated by around 700 corporate farmers or commercial farmers, typically part of major enterprises from Australia or Europe. The next level is what we call “emerging farmers,” which is an interesting sector. After that, there are the small-scale farmers that are still businesses that produce a profit. Some of these need to be better organized, which we do through farmer cooperatives and associations. We access these farmer groups through the Zambia National Farmers Union, which is also a shareholder in Zanaco. We lend to the cooperative/association, which select beneficiary farmers for these loans.

What comprises the remaining 75% of your portfolio?

The bulk of it comes from two other areas. We deal with many of the flagship companies, but this is still a relatively small market in this country. The other area is personal loans for salaried workers, which is a common product that you see in Africa. It is basically an unsecured advance against a commitment from the salary of the individual. Typically, we enter into schemes with employers and divert a portion of the salary for loan repayment.

What is your medium-term vision for the future of Zanaco?

We want to continue making profits as we are a publicly listed company and need to recognize our responsibilities to shareholders. The ultimate game is to continue growing the business. The country is not overbanked, despite the high number of banks, although a major part of the population remains unbanked, whereby it appears as though there is no market. I am optimistic about the potential. It is also important to balance our portfolio more to achieve a better spread of our business. I would like to see us continue to grow in agriculture, and to develop more of a balance between the retail and wholesale markets in order to mirror the economy as much as possible. Improving customer service remains the greatest challenge for Zanaco.