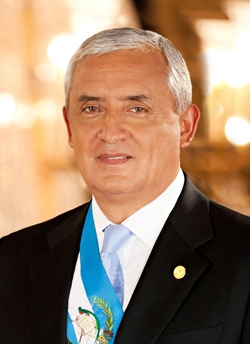 President, the Republic of Guatemala

Otto Pérez Molina began his military career in 1966, distinguishing himself through discipline and leadership skills before going on to complete his studies in defense and international relations in the US and Costa Rica. In his capacity as a senior military leader, he was instrumental in the reestablishment of democracy in Guatemala in the mid-1980s, and in 1993 was declared one of the top 10 personalities of the year by the Chamber of Free Enterprise of Guatemala. In the late 1990s he became head of the Guatemalan delegation to the Inter-American Defense Board, and was awarded with the Guatemalan Army Cross, before retiring from the force with the highest honors. Following the foundation of the Patriotic Party in 2001, he has held a number of important public roles, finally becoming President of the Republic in 2012.

Share on:
"We have grown closer over the years, and our common ties have reached people and communities from both countries."

How have bilateral ties between Panama and Guatemala developed in recent years?

The ties between both countries are deep, strong and dynamic, and over the past few years, they have only improved—the level of interaction has positively increased. However, I would also like to highlight ties between both countries within the Central American Integration Systema (SICA). Panama has grown at a rapid pace over the past few years, and it would be exceptional if we could spread such a trend to Central America through the SICA.

Since both countries recently signed a Memorandum of Understanding (MoU) to boost trade, what are, in your opinion, the sectors with the greatest potential to deepen relations?

Tourism is one of the sectors that sees a kind of monopolized trade relationship between both countries; however, I see a very interesting potential in infrastructure projects and energy (including renewable energies), as well as many others. These will be the first steps to build even deeper and stronger trade ties between Panama and Guatemala. Let me only add that there are already ongoing projects in these fields that have the participation of companies from Panama.

“We have grown closer over the years, and our common ties have reached people and communities from both countries.”

To what extent has the marked decline in violence in Guatemala City impacted cooperation between both countries?

Over the past two years, Guatemala City has seen a 37% decline in homicide rates, coinciding with my tenure as President. We have already held fruitful meetings with Panama to boost the transfer of technology, intelligence, and communications that will ensure agility in tackling issues such as transnational crime. Over the past two years, we have strengthened ties between both countries in this field to make sure that current information is immediately at hand to tackle these problems.

How do you see bilateral ties evolving over the next few years of your term?

Bilateral ties between Panama and Guatemala were already excellent before I took over the presidential office, and I truly expect them to remain positive over the years to come. We have grown closer over the years, and our common ties have reached people and communities from both countries.

What conclusions did you draw from the World Economic Forum on Latin America hosted in Panama City?

First of all, I would like to congratulate the President of Panama and its people for the milestone achievement of bringing such an internationally high-profile forum to our region. The event has set a precedent for future regional development, having placed Central America in the spotlight of international attention. Guatemala hopes to organize an equally high-profile event within the coming years. The World Economic Forum provided us and certain other nations with the opportunity to showcase regional developments and invite foreign investors to consider our countries.