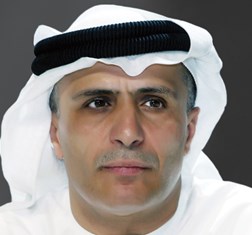 Director General & Chairman, the Board of Executive Directors of Roads & Transport Authority (RTA)

Mattar Al Tayer obtained his bachelor’s degree in civil engineering from the University of Wisconsin in 1983, after which he worked in Dubai Municipality in several professional and supervisory roles, ranging from Director of the Roads Department to Deputy Director General of Dubai Municipality. He took leadership of RTA in November 2005 where he oversaw the establishment phase. Throughout his professional career, Al Tayer has received multiple accolades in recognition of his successful leadership of RTA. He also assumed several key posts, including Deputy Chairman of the infrastructure and Environment Committee of Dubai Executive Council and Chairman of the Emirates Society of Engineers.

Share on:
TBY talks to Mattar Al Tayer, Director General & Chairman of the Board of Executive Directors of Roads & Transport Authority (RTA), on the Parallel Roads Project, automated aerial taxis, and managing transport ahead of Expo 2020 Dubai.

What have been the main accomplishments of RTA over the last year?

RTA is leading the transformation of the transport sector into the future. The ongoing expansion of roads and infrastructure projects in Dubai include landmark developments such as the Airport Roads Project, which caters to around 92 million travelers expected to be served by Dubai International Airport by 2020; the Parallel Roads Project that will ease traffic in the area parallel to Sheikh Zayed Road to the east; and the construction of Route 2020 worth AED10.6 billion which is a 15-km extension of the existing Red Line route. In addition, RTA has set strategies to shape the future of transport with the Dubai Self-Driving Strategy, which aims to achieve at least 25% of all trips in Dubai through self-driving transport by 2030. The Dubai Self-Driving Strategy is the most comprehensive of its kind in the world, as it does not only focus on private vehicles, but also targets seven public transport modes. RTA is currently studying and piloting several futuristic modes with global firms, such as the hyperloop, self-driving bus rapid transit (BRT), self-driving transport pods, and automated aerial taxis. Another important accomplishment is the Enterprise Command and Control Centre (EC3), which was inaugurated by Sheikh Mohammed in May 2017. It is the largest and most sophisticated facility of its kind. Known as the “Nerve Center of Dubai,” it links all of RTA’s different transport control centers into an integrated central platform, which will also play an important role in managing transport for the upcoming Expo 2020. RTA has recently also approved the RTA Digital Strategy, focusing on innovative technology solutions tailored for users. We already started the smart mobility transformation and have implemented a number of future modes that have made transportation in Dubai smarter and cleaner. We have the largest public Tesla fleet in the world, consisting of 200 electric airport limos. Moreover, we have implemented a number of smart solutions, such as smart car rentals, smart bus shelters, smart yard testing, and virtual reality training for new drivers. We currently have over 173 smart services that have reduced the number of customer visits by more than 50% in the past two years.

What benefits can self-driving vehicles bring to Dubai?

RTA is working on many projects to achieve the goal of having at least 25% of all trips in Dubai in self-driving mode by 2030. Examples of these are the connectivity framework, testing procedures, and the legislative framework. We have already signed MoUs and partnerships with multiple international firms and research universities, such as Daimler, Next Future Transport, Hyperloop, and Tesla. Through our strategy, we will realize both measurable and intangible benefits in Dubai by 2030. Based on our international research and its application to our local environment, we expect to achieve a 12% reduction in our carbon footprint. Moreover, we expect a 44% reduction in the cost of mobility, a 50% reduction in parking requirements, and at least a 12% reduction in the number of accidents.

What are RTA’s main plans and objectives for the coming year?

In the next few years, RTA will continue its journey to lead the mobility sector and transform Dubai into the smartest city in the world. We will foster our cooperation with innovators and start-ups to continue testing, piloting, and deploying new trends, technologies, and modes. In this regard, we also work with Dubai Future Accelerators to launch partnership platforms that will make Dubai the global attraction of future transport modes. Another example is our recently launched Dubai Challenge for Self-Driving Transport, the largest international platform for companies and research centers to test and deploy different scenarios of self-driving technology. We also concentrate on safety, security, and privacy issues of such new modes. We will continue our efforts to optimize the efficiency of our mobility systems through initiating and launching different applications and further developing and expanding Dubai’s transport systems.