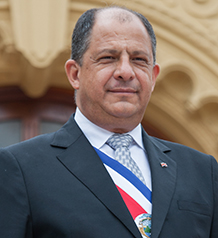 Share on:
TBY talks to Luis Guillermo Solí­s Rivera, President of Costa Rica, on the evolution and importance of free trade between Costa Rica and Mexico.

How would Costa Rica benefit from becoming a member of the Pacific Alliance?

Regional economic integration is an essential element for our countries to progress towards greater economic and social development and better quality of life. In this framework, the Pacific Alliance should be seen as an alternative to propel growth and development, based on increasing the competitiveness of the economies concerned, and a deep integration that transcends the purely commercial aspect. This initiative offers the opportunity to establish strategic partnerships that favor the development of investments, increase real and effective competition, improve productivity and the competitiveness of goods and services, and facilitate commerce between countries, fostering better integration with other regions. Costa Rica has closely followed the Pacific Alliance as it gradually approached the initiative. As with other member countries of the Pacific Alliance, our country offers a pro-business investment environment that we continue to work on in order to improve and strengthen.

The Free Trade Agreement (FTA) between Costa Rica and Mexico came into effect in 1995. Looking back, how has this agreement encouraged commerce between the nations and what have been its main achievements?

The treaty contributed towards the increase of the total commerce between the countries, bringing greater commercial and competitive opportunities to the productive sector, and also foreign direct investment. Mexico constitutes a relevant market for our country, as it is the main destination for exports products such as palm and almond oil, and machinery and equipment for preparing fur and leather. Since 1995, the number of companies to export to Mexico has risen from 65 to 165 in 2014. At the same time, this country is one of the most important suppliers of diverse products, including inputs that increase the competitiveness of national production. Historically, Mexico has been one of the main investors in Costa Rica. During the past decade, it has represented about 5.2% of FDI. In 2014, Mexican investment reached a total of $132.7 million, destined mainly for service sectors and real estate. In July 2013, the FTA between Central America and Mexico came into effect. This converges the already existing FTAs between the two regions and it also creates an FTA in which Central American countries can accumulate origins in their exports to Mexico, which empowers its comparative advantages.

Mexico also has an FTA with US and Canada, which has encouraged commerce with its northern neighbors. To what extent is Mexico seen as a point of entry to these markets?

In the case of Costa Rica, there is an FTA with Canada that has been in effect since 2002. There is also an FTA from 2009 between the US, Central America and Dominican Republic (CAFTA-DR). Historically, the US has been the main commercial associate of Costa Rica and it still is even though its participation has been moderated as a result of a diversification of Costa Rica’s foreign commercial balance. In regards to Canada, parts of Costa Rica’s exports arrive to that market through distributions networks based in the US.

During the past years, Mexico has gone through several reforms in order to stimulate its economy. In what areas of the Mexican economy do you think there will be more presence of Costa Rican companies in the next year?