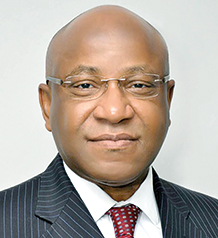 Jibril Aku studied Business Administration in Banking and Finance at the Ahmadu Bello University, where he graduated with Honors in 1986. He has also received a Diploma in Insurance from the Institute of Administration, ABU Zaria and an MBA from the University of Benin. He has held his current position since March 2010. Before his appointment, he was the Executive Director of various treasury and financial institutions since 2006. Before joining Ecobank in Nigeria, he served as Acting Treasurer of Citibank Tanzania and as Country Treasurer of Citibank Nigeria. He started his banking career in 1979 with the United Bank for Africa. He has over 35 years of banking experience.

Share on:
TBY talks to Jibril Aku, CEO of Ecobank, on second-half results and using new financial tools for inclusion.

Ecobank is the continent’s largest bank, present in 36 African countries, but Nigeria has recently been the center of the bank’s attention. What importance does the Nigerian market have among the bank’s operations?

Nigeria was the second subsidiary of Ecobank Transnational Inc. (ETI), after Togo, but started business years after Togo. It started as a small niche bank with a strong focus on corporate and investment banking, as well as wealth management. When the Nigerian banks started growing as a result of the commodity boom, it remained a niche player. The founders of ETI always considered Nigeria as an important country and, therefore, it was the second country where they launched their operations. The majority of the founding fathers were from Nigeria. Over the years, as banks in Nigeria grew we did not grow in tandem. Our operations in the region grew rapidly, but we did not improve our market share in Nigeria. The target was thereafter set to make the bank one of the top three players in the Nigerian landscape. Nigeria was a dominant economy and was playing an important economic and political role in stabilizing the region, and we were starting to see linkages in trade among all the other African countries. At some point, a large presence in Nigeria will finance and better integrate the economies of some of the smaller countries, leveraging the businesses coming from Nigeria.

What results do you expect for the second half of 2015?

Our growth last year was mainly from loan growth. We were able to finance good transactions in oil and gas, manufacturing, and other sectors. In 2015, there has been significant slowdown in loan growth as the Central Bank tightened its policies as a result of the oil price. People started to panic, as historically, when we have such a massive drop in oil prices it has created portfolio quality problems in Nigeria. But some of those weaknesses have been corrected by imposing limits across different sectors. In the past the finance sector was over-concentrated on energy, and when that sector took a hit, the absorption capacity to deal with it was limited. Over the years, the Central Bank has managed that risk by diversifying the portfolio to avoid any concentration effect when there is a shock in any particular sector. There is no particular sector that has more than 20% of the loan book.

How have you been leveraging new tools in the banking industry to move your business forward?

The nation’s strong focus on cashless policy has changed the banking habits of customers, particularly so-called millennials, who do not go into banks at all. They do their banking through alternative channels, the internet, POS, or ATMs. For any bank to be able to grow there must be a developed and functioning channel. We have to have a good internet banking system and mobile money payments. Today, the only reason we see people coming into the branches is to deposit money. For Ecobank, that has helped us to manage the large customer bank that we have—we have over seven million customers. Some of these customers are micro-finance customers and so we need to have a low-cost approach to deal with them, hence the various channels. The next segment that we are looking at is the agent banking system, which the Central Bank has also licensed. We are just waiting for a better rollout program so that we can license agents, whereby people can make cash pull and cash deposits of small values with agents. The telecoms sector, in contrast, has a much broader customer base than we do and we believe that, with mobile money, we should be able to reach out to most of their customers. That problem will be resolved subsequently and that segment will take off at some point in time.