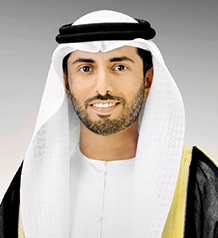 HE Eng. Suhail Mohamed Faraj Al Mazrouei was appointed as UAE Minister of Energy in March 2013. He is also the Chairman of the Boards of Directors of the Federal Electricity and Water Authority, Mubadala Petroleum, and Emirates Liquefied Gas Company, as well as a Member of the Board of Directors of the Petroleum Development Co. and Dolphin Energy. He has held multiple positions in government as well as the private sector, and registered numerous achievements in the service of the country throughout his career. Al Mazrouei graduated in 1996 from the University of Tulsa in the US with a Bachelor’s degree in Petroleum Engineering.

Share on:
TBY talks to HE Eng. Suhail Mohamed Faraj Al Mazrouei, UAE Minister of Energy, on diversifying the energy mix, the impact of falling oil prices, and Emiratization.

What are some of the Ministry’s priorities when it comes to diversifying the UAE’s energy mix leading up to 2030?

Natural gas accounts for almost 100% of our energy currently, but we know that this will not last. We want to increase green energy as a share of the overall electricity sector. We aim, by 2020, to achieve around 30% of electricity generation from emission-free sources, with 25% from nuclear power and the remainder from solar energy. Today, we have three solar projects that are currently in the bidding phase, each at 100 MW. One is in Al Ain, and the other is in Dubai. At the end of 2014, we hope to be at the final investment decision stage to start constructing the largest single-site LNG receiving facility in the region, the Emirates LNG receiving terminal at Fujairah. With a capacity of 9 million tons, it will enable us to deal with future growth in demand. We have received commercial bids, and we are currently evaluating them. The facility will help us to diversify our gas import market by having three different forms: indigenous gas, pipeline gas, and LNG. The fact that gas prices are increasing has made us consider sour gas projects. Electricity demand is growing at around 6% per annum in the UAE, and that requires additional resources every year. The first sour gas project is Al Hosn Gas’ Shah field, which will start production in 2015. We are now implementing the second sour project, Bab, which Shell is developing. That will come in 2017. With electricity as the largest consumer of gas, we are working with electricity providers and regulators across the Emirates to establish a unified conservation law to encourage people to consume less. The levels of subsidies paid by the government will triple when the more expensive gas comes into the system. We want to look at this structurally and with a unified approach. We are trying to monitor newly built housing and structures through green initiatives, which force the construction of energy-efficient buildings. However, existing buildings are less efficient. We have launched the first UAE Energy Status Report for 2015 in collaboration with the UN, which puts together all of these initiatives and all of the work that has been done in one easily comprehensible format.

What is the Ministry doing to make solar energy more attractive and feasible for the private sector?

We are trying to make the tariff attractive and reasonable, while at the same time looking at the costs of generation for solar energy. The PV Solar energy generation cost went as low as $0.12 per KWh. This makes solar much more attractive. The UAE, and the wider region, have the lowest tariffs in the world, and we are going to try to raise them when prices increase. If we reach $0.15-0.16 per KWh, that would be reasonable. In Europe, it is around $0.33 per KWh. It is not costing us as much as it used to, but people need to preserve energy. People are now living in larger houses with many more amenities. The aim is for a reasonable per capita use of energy.

How are you working to bring about change in consumption behavior toward conservation?

Talking to, and incentivizing people, is extremely important to us. We have started giving lectures to this effect. I myself have gone to universities for this purpose. We gave a televised lecture at the Majlis of HH Sheikh Mohammed bin Zayed Al Nahyan, the Crown Prince of Abu Dhabi and Deputy Supreme Commander of the UAE Armed Forces, which was attended by government officials, businessmen, and diplomats, along with about 300-400 other citizens, on the subject of the importance of the conservation of energy. We also allocated several prizes across the different sectors for consumers. We launched the UAE prize for electricity and water conservation achievements offered to housewives, schools, and mosques for reducing energy and water consumption.

In terms of solar energy technology, what role does innovation play alongside public-sector involvement and R&D in Abu Dhabi?

Innovation plays a key role, which is why we have not merely focused on attracting investors but have also emphasized R&D. For example, through the Masdar Institute of Technology we are developing better and more efficient PV cells and working with international companies on new technology. Masdar is one of the leading companies that is wholly owned by the government of Abu Dhabi. It is a major investor in a variety of renewable energies. We are also working directly with the industry by putting seed capital into research projects in companies. Our market is open for this, and has attracted people to work on innovation in this area; however, we do not want to over-subsidize the sector. Incentives and new technology are coming to the market, and I believe that we have an excellent future in solar energy.

How does the recent slump in oil prices affect your outlook on production capacity building?

Capacity is for the long term. As a mature investor in and producer of oil, we always look at the long term to continue to being a reliable producer. Upstream energy requires such investments to cater to the shortage that is coming to the market. However, pricing is important, and what led to the development of fracking in the US was pricing. If pricing there does not adjust, investors will leave; you don’t produce oil to lose money. I don’t see these low prices as the new norm. The current low prices aren’t going to affect the major players, such as the UAE, in the long term. The worry is that if the cost of production stays higher than the price for consumers, investors will be scared off. We need them to stay and help us supply the world with what it needs. Imagine what would have happened to prices if shale oil had not been around over the past four years. It has been a huge help to the world to keep prices reasonable and sustainable, at around $100 per barrel. The context is important; this is not the first time we have seen a slump, and in general, 2014 was a good year for us, with average prices still standing at around $100.