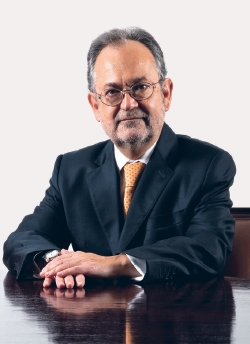 Having studied civil engineering at the Universidad de los Andes, Luis Fernando Alarcón Mantilla attended graduate school in Economics at the same university and has a Master’s of Science in Civil Engineering-Hydraulic Resources Systems from MIT. In 1995 he took part in the Advanced Management Program at Oxford University. Before being appointed as General Manager of ISA in 2007, he presided over the Asociación de Administradoras de Fondos de Pensiones y Cesantias, and during the Presidency of Virgilio Barco served as Minister of Finance. During his professional career he has additionally occupied the following positions: Colombian Representative as Executive Director of the Inter-American Development Bank, and President of Flota Mercante Grancolombiana, as well as being member of the Board of Directors of Banco de Bogotá, Colombian Securities Exchange, Petrocolombia S.A., ISA, CTEEP, and INTERNEXA.

Share on:
Possibly the most interesting news from ISA over 2014 has been the contract for the construction and operation of a transmission line in Lima, Peru. What is the importance of […]

Possibly the most interesting news from ISA over 2014 has been the contract for the construction and operation of a transmission line in Lima, Peru. What is the importance of this news, and what does ISA offer Peru in this particular project?

Could you offer us an assessment of your main achievements in 2013?

In 2012, we began a process of reviewing our strategy in finding new ways to generate value for the company. We found out that in the last 20 years that ISA was very successful at entering new markets in the region. During this review of our strategy, we arrived at the conclusion that the main priority was now to capitalize on that experience and to try to make those assets more profitable. We defined several strategic focuses. Firstly, we want to continue growing in a very profitable way. That is a simple statement. We had to become careful in our investments. We prioritized efforts to become more efficient, and in that way made our investments more profitable. ISA today is a world-class company in terms of asset size, and our regional geographical presence. We found that we still could have made some improvements in our operational practice in order to become one of the most efficient companies not only in Latin America—we know that we are the best in the region—but to become one of the best in the international arena.

Over 2013, ISA carried out a number of important projects to improve network reach and capacity. How important were these for the company’s operations, and for the national interest?

The important thing is that in Colombia, the expansion of the transmission system is done through a system of public bidding, in which the government offers potential investors the possibility to build these new infrastructure projects. In Colombia, we have three main companies interested in competing for these projects. ISA is one of these, of course, but there is also EEB and EPM. Sometimes we are responsible for building these projects. In other cases, we have EEB or EPM doing this. In 2014, we are going to put into operation the transmission line to connect the new Hidrosogamoso hydroelectric power station in the region of Santander, to connect the hydro-station to the national grid. This is a central station of ISA, but the line to connect the hydropower generation to the national system is our responsibility. And in the near future, the government is opening up for tender several projects estimated at some $1.5 billion in size that are important for the development of the national grid. ISA is participating in all of those tenders, and hopes to win a number of them.