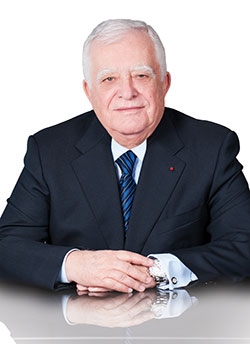 Adnan Kassar is the Chairman and a major shareholder of Fransabank SAL, Chairman of Fransa Holding (Lebanon) SAL, and founder and co-owner of A. A. Kassar SAL, a trading company headquartered in Beirut. He was born in Beirut and holds a License of Law from the Faculty of Law, at Université Saint Joseph, affiliated to the Faculty of Law of Université de Lyon. In 1999 he was the first Arab to head the International Chamber of Commerce (ICC) based in Paris and present in over 140 countries for a two-year term. Today, he is the Honorary Chairman of the General Union of Arab Chambers of Commerce, Industry, and Agriculture in Arab countries. His efforts have contributed to the creation of the Greater Arab Free Trade Area, which will serve as a prelude for the establishment of the Arab Common Market. Kassar has held, for over 30 years, the position of President of the Lebanese Federation of Commerce, Industry, and Agriculture in Lebanon. He was appointed Minister of Economy and Trade of Lebanon in 2004 and 2005 and Minister of State from 2009 to 2011.

Share on:
"Fransabank Group’s expansion strategy is focused on consolidating and streamlining activities."

Fransabank ranks first in Lebanon in terms of its branch network. What strategies have allowed you to gain the leading position in such an intensely competitive market?

Fransabank Group’s expansion strategy is focused on consolidating and streamlining activities and subsequently growing its local and overseas entities. On the local level the bank is developing and increasing its organic growth by expanding its business activities and increasing its presence across the Lebanese territories. The bank’s expansion strategy also includes pursuing and achieving selective acquisitions. In this context, the bank has already achieved many acquisitions, including Banque Tohmé, Universal Bank, United Bank of Saudi and Lebanon, Banque de la Békaa, BLC Bank, and Lati Bank. The latest was our seventh acquisition, Ahli International Bank, with nine new branches. Currently, Fransabank Group ranks first in terms of local branch network with 124 branches strategically spread nationwide to further enrich its role in the Lebanese economy.

Fransabank has a strong presence not only in Lebanon, but also in other counties. How do you assess overseas markets’ performance?

Our international expansion strategy is to expand to selective, regional, or international markets, which are growing and with high promising potential. This strategy has resulted in Fransabank’s presence in 10 countries in addition to Lebanon: France, Algeria, Syria, Sudan, Belarus, Cyprus, Cuba, the UAE (Abu Dhabi), and Iraq, and considering the regional and international establishment of Fransabank’s presence in Africa. The bank is satisfied with a contribution of expansion to the bottom line, despite the impact of the unprecedented geopolitical events in some of the Arab countries. We expect the significance of this contribution to further grow in the medium term.

Fransabank recently launched the China Desk. What is the significance of this step?

Fransabank Group, having noted well China’s expansion, extensive investments, and first-ranking trade ties to most of the markets where Fransabank is present, and building on our historic ties to China spanning over 60 years, we have pioneered a China Desk at Fransabank, employing Chinese citizens. The China Desk serves our local clients dealing with China and the Chinese entities, companies, and banks dealing in our markets of operation.

How has Fransabank’s product portfolio evolved over the past years, and what are your future targets?

Fransabank’s portfolio provides a broad range and a vast, targeted, well-diversified basket of retail, commercial, corporate, investment, and international banking services to local, regional, and international clients. The Bank offers a wide variety of retail products as personal loans, car loans, housing loans, eco-friendly loans, eco-home loans, along with a broad range of plastic cards, bancassurance products, as well as e-services like mobile payment (SIMBA), a call center, internet banking (i-bank), and an SMS service. In terms of corporate and international banking services, Fransabank provides international trade finance services (L/Cs and L/Gs) through its extensive network of worldwide prime correspondents, benefiting from large credit lines to cater for its clients’ needs. Fransabank also benefits from long-term credit lines from financial institutions such as the IFC 10-year $40 million Sustainable Energy Finance Credit Line, and the EIB12-year ‚¬45 million Credit Line; these allow us to support Lebanese SMEs and corporates operating in the productive sectors of the economy. Fransabank also offers, to its overseas clientele, a large variety of services, and its subsidiaries abroad are in France, Algeria, Iraq, Cyprus, to name a few. Fransabank launched the first China Union Pay card in Lebanon, which is the only card accepted by 2 million merchants in China, and also in over 150 countries worldwide in partnership with over 300 international institutions.

What role does technology play at Fransabank and what innovative solutions have recently been implemented?

At Fransabank, technology plays a central and key role that enables and drives business in order to meet its customers’ needs and expectations. In this context, Fransabank is among the earliest implementers in Lebanon of complete internet banking solutions and evolving mobile payment solutions. Fransabank is still one of the market leaders in the plastic cards industry and has recently launched an advanced back office platform that will enable Fransabank to better develop its services and increase its security and availability. We are in full compliance with Central Bank regulations and international related laws and best practices. To this end, we have invested in technology and implemented solutions for FATCA and AML from the international market leaders. Fransabank has already taken major strides in migrating its entire operating technology to a new system and is continuously evolving its IT infrastructure and banking technology solutions to further enhance and secure its business services and processes according to pertinent international norms and standards.

What is your long-term vision for Lebanon’s banking sector, as well as your assessment of Beirut’s potential to regain the role of a major banking center in the region?

Despite the geo-political circumstances in the region, the Lebanese banking sector has succeeded in building its multi-dimensional strengths, financials, IT infrastructure, operating banking expertise, high liquidity, strong solvency, trust of its clients and business partners, rigorous risk management, and corporate governance practices. All of this would make the sector ready to support Beirut’s overall credentials, and to fully restore its glitter to recapture a leading financial and business role in the region and the world.

What are Fransabank’s expectations for the year ahead?

The results of the first two months of 2015 have encouraged the international financial institutions to forecast the growth of Lebanon at 2.5% in 2015. We also believe that with the initiatives of HE Dr. Riad Salameh, Lebanon might achieve an expected real growth rate of between 2% and 2.5%, based on respective World Bank and IMF estimates. In addition to that, should current dialogue between the various political parties lead to the election of a new president for Lebanon, we would be able to achieve higher single-digit percentages, which are highly likely to reflect positively on its public finances, economic activities, and social and living situations.