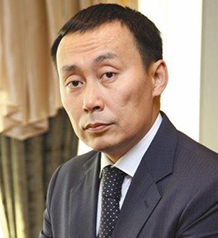 Asylzhan Mamytbekov was born on September 17, 1968 in southern Kazakhstan in the city of Shymkent. He graduated from the Kazakh State University and the Kazakh State Academy of Management. He has held a number of important government positions during his career, including Deputy Mayor of Astana from 2004-2006. He was also the Deputy Head of the Prime Minister’s Office from 2007-2008 and the Chairman of the Board of KazAgro National Holding from 2008-2011. He was appointed to the position of Kazakhstan’s Minister of Agriculture in April 2011. He is also the recipient of the Kumet order award.

Share on:
TBY talks to Asylzhan Mamytbekov, Minister of Agriculture, on government policies, export market conditions, and joining the WTO.

What policies have been adopted by the Ministry to stimulate growth in the local agricultural sector?

According to the Committee for Statistics of the Ministry of National Economy of the Republic of Kazakhstan, the GDP share of agricultural products was 4.4% in 2014. The volume of gross agricultural output has increased over the past five years by a factor of 1.7. Crop production during this period has doubled to KZT1.3 billion ($4 million), while livestock production has increased by over 150% to KZT1.2 trillion ($3.6 billion). The volume of total food production for this period has increased by a factor of 1.6 to KZT103.5 billion ($300 million). To further establish the conditions necessary to improve the competitiveness of the agro-industry, the Ministry of Agriculture and the Akimats of the region are implementing the Agro-Industrial Complex (AIC) Development Program in the Republic of Kazakhstan for 2013-2020, known as “Agribusiness-2020.” This program provides for an increase in the volume of state support for AIC by a factor of 4.5, which will attract about $40 billion in private funds to the industry. As late as 2015, the amount of subsidies for the development of the industry amounted to over $500 million, which is twice that of 2013, when it stood at KZT88.7 billion. Along with the existing subsidies for resources and activities in crop and livestock production, the Program contains a number of new tools to support the industry, such as financial restructuring, reduction of interest rates on loans and leasing, and subsidies for costs to guarantee and insure loans. During the immediate implementation of the Program, it is planned to increase the physical volumes of agricultural production by 150% by 2020, to raise labor productivity per person employed in agriculture by a factor of three, and to increase the amount of state support for agriculture by subsidizing agribusiness entities by a factor of 4.5. Ultimately this will achieve an increase in export earnings from the sale of agricultural products by 20%.

The state of the Kazakhstani economy has until now been directly dependent on the global economy. The introduction of a free exchange rate in the country for Kazakhstani agriculture will largely be a surplus, and domestic products will become more competitive. In this context, the need to support domestic goods producers, both financially and in an administrative capacity, is of particular relevance today. As far as AIC exports are concerned, for the first nine months of 2015 these have decreased by 27.4% compared to the same period in the previous year, and amount to $1.4 billion. However, due to changes in monetary policy, based on a free-floating exchange rate of the tenge, the alignment of prices for imported and domestic food products is expected. This will ultimately have a positive impact on the recovery of domestic products in the market. Exports of agricultural products to foreign markets will be resumed.

How much will joining the WTO increase the capacity of the Kazakhstan’s agricultural sector?

With the right approach, Kazakhstan’s admission to the WTO would only contribute to the further development of the agricultural sector. Among the advantages of accession to this organization would be attracting new investment, the possibility of resolving disputes in international courts, and the chance to form international trade regulations. Domestic goods producers will have access to a unified international legal space, wherein they will acquire protection against trade discrimination and gain freedom of transit for their products. Conditions for accessing the AIC domestic products to foreign markets will be improved, while additional conditions to improve product quality and competitiveness will be created. The major task of the agriculture sector is to ensure the efficient production of agricultural products in sufficient quantities for the domestic market. Moreover, there are also planned global agribusiness subsidy reforms to further automate the process of subsidization.