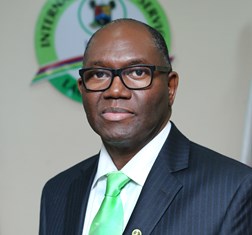 Hamzat Ayodele Subair obtained his first degree as a Bachelor of Arts in Economics from Metropolitan University of Manchester (Formerly Manchester Polytechnic), England in 1982. He subsequently obtained a Master’s degree in Business Administration at the University of Lagos. He started his professional career at PricewaterhouseCoopers in 1982. His portfolio of clients cut across various sectors and industries including private, government, and non-government organizations. In 1987 he joined Hamzat Subair, Folami & Co (Chartered Accountants) as Manager and later became the managing partner. He is a Fellow of the Institute of Chartered Accountants of Nigeria (ICAN) and Chartered Institute of Taxation of Nigeria. He has served as the Country Representative and the Project Coordinator of the Centre for the Development of Enterprise (CDE) and Proinvest. He was appointed Executive Chairman of the Lagos State Internal Revenue Service in August 2016.

Share on:
“Compliance for people in paid employment, usually called 'Pay As You Earn,’ is well over 70%.“

What measures and policies has LIRS implemented in recent years to improve tax collection?

LIRS was established in March 2006, through the presentation of a bill to the Lagos State House of assembly and subsequent passage of the Lagos State Revenue Administration Law, making the then Board of Internal Revenue autonomous and self-accounting. This autonomy allowed for an increase of revenue from a previous monthly average of NGN600 million to an average of NGN30 billion monthly. This was largely due to improved quality of service delivery to taxpayers, improvement in the use of IT and other modern methods of administration in tax collection and an unprecedented enlightenment campaign on tax administration and education. We also invested in training and development of staff, ensuring that officers of the LIRS are technically competent and know the relevant tax laws and regulations.

Is Lagos’s e-payment system and automated processes unique to the local environment?

Lagos really stands out in this regard. We are almost like an academic institution for some other state tax authorities in Nigeria. When we grow and improve together, the entire country enjoys synergies. All payments made to Lagos State Government can be viewed real time, with payment history securely stored for future reference. This was climaxed by a pronouncement by the Governor of Lagos, His Excellency Mr Akinwunmi Ambode, mandating that from April 2018 onward, all payments in Lagos must be electronic. We were already at around 80% electronic payments, but this executive order changed the landscape completely as automation promotes transparency and has helped build trust and confidence.

What is the tax compliance level in Lagos?

We need to break it down across sectors to get a better idea. Compliance for people in paid employment, usually called ‘Pay As You Earn,’ is well over 70%. There are hardly any businesses that employ three to five people or above that are not remitting PAYE taxes. For self-employed people however, it is difficult to access information. Many are paid in cash and are therefore below the radar. We do, however have ways of bringing them into the tax net, such as through withholding taxes. The other taxes we collect at LIRS apart from Personal Income Tax include withholding tax, capital gains tax, stamp duties, and consumption tax. Consumption tax is unique to the hospitality industry. A 5% tax is added to any consumption or service in the hospitality industry under the Hotel Occupancy & Restaurants Consumption Tax (HORCT) When we initiated this tax, we encountered stiff resistance from operators in this industry, there were claims that it was a duplication of the federal VAT. The issue was taken to court and there was a ruling in 2012 validating the Hotel Occupancy & Restaurants Consumption Tax and the Lagos State Government’s right to charge it. We have since been collecting this tax and the compliance we can say is approximately 70%. Automation of our tax processes in Lagos State has increased transparency and accountability.

How would you explain Lagos’s success in tax collection compared to the rest of the country?

We have been blessed with good leadership in Lagos State. Additionally, we were forced to think outside of the box for the purpose of revenue generation. Infact in Lagos, we say that there is no box, and we are willing to implement any strategy or reform that will improve our effectiveness and efficiency. We have had Governors who are passionate about turning the state into a leader in not just Nigeria but of Africa. They have a vision for Lagos and a matching passion for its sustainable development, which makes life much easier. The state has a number of ongoing projects, and government is working to develop every part of Lagos. Many of these projects are only possible with the money we have been collecting in taxes. For most states, there is a ratio of 90:10 between the allocation paid to them from the federation accounts and the revenue generated internally, In Lagos however, a reversal is the case, with the federal allocation being only 25% and IGR 75%.

On a federal level, what does Nigeria need to do to improve tax revenue?

Because of the oil price dip, budgets allocated to the states from the federal government have dropped, forcing many state governments to start thinking about developing their revenue authorities with the view to increasing their internally generated revenue. More states are starting to seek the autonomy that LIRS has had in Lagos for about 12years. Governors have started to give heads of states’ internal revenue services more freedom, which reduces bureaucracy and allows for greater strategizing and creativity. The state next to Lagos in revenue generation collects approximately NGN7-8 billion monthly and we have many others generating less than NGN2 billion monthly.

How successful has the Voluntary Asset and Income Declaration Scheme (VAIDS) been?

The scheme was initiated by the Federal Ministry of Finance in collaboration with Federal Inland Revenue Service, and the State Internal Revenue Services. Lagos through this scheme has been able to generate material revenue. Lagos was the most successful state in terms of the program implementation. Some states were a bit apprehensive at commencement of the scheme; however, we recognized its value from the start. We were the first state to sign an MoU through the Joint Tax Board (JTB) because we saw the scheme and the potentials it held to increasing our revenue. On the part of the taxpayer, people who voluntarily declare their assets and income get interest and penalty waivers. Additionally, there is no criminal prosecution for those who sign up for the program. You must, however, truthfully declare, because if it is subsequently discovered that you lied, then you have breached the agreement and thereby your immunity. The declaration is extremely confidential. No one outside the agency VAIDS unit knows who has come and declared assets. Furthermore, Nigeria has signed the OECD agreement that allows for Exchange of Information. Many Nigerians have properties abroad, some of which is income producing, and it is vital that we develop a plan to collect tax revenue on all incomes earned locally and abroad. Globally, there is an effort to ensure that people pay taxes promptly and correctly to the relevant authority.

The first thing we want to do is widen the tax base. After our analysis, we saw that people in paid employment bear the burden of taxation more than others. We want to expand the tax net for high net worth individuals and the informal sector. We are investing more in technology as well. We are developing a tax administration solution by which taxpayers will be able to interact with the platform from the ease of their offices or homes. It will allow them to buy into the philosophy of paying their taxes. We expect to go live by the end of the year, and this will really help us grow revenues. We seek to develop BVN as a tool to identify individual taxpayers. We also plan to harness our integration with other state government agencies such as the department of motor vehicles, the Lands Bureau, Land use charge etc. in verifying incomes against vehicle and property purchasing habits. Lastly, we will move into a larger office acquired by the state. We are extremely excited about everything that 2019 has to offer. The Government is dedicated to improving the lives of everyone in Lagos through the provision of infrastructure and social amenities. . The revenues we collect are vital components of the government’s efforts to transform the state. All these visible projects make my job easier, because people are able to see where their money goes. They can see they are contributing to the development and growth of Lagos.