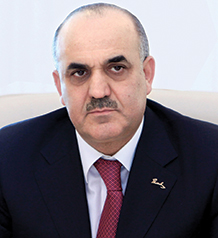 Minister, Labor and Social Protection of the Population

HE Salim Muslumov graduated from the Azerbaijan Institute of National Economy in 1983, and continued his postgraduate education in Moscow State University until 1987. From 1988 to 1995, he worked as a lecturer, senior lecturer, and assistant dean at Azerbaijan State Economic University. He then worked as department chief at the Ministry of Finance from July 1995 until March 2000. Subsequently, he was promoted to Major-General of the Customs Service, and was elected Bureau Member of the International Social Security Association in 2004. He served as Chairman of the State Social Protection Fund of the Republic of Azerbaijan until 2013, and was then invited to his current post. He is the author of four books and over 50 scientific articles.

Share on:
TBY talks to HE Salim Muslumov, Minister of Labor and Social Protection of the Population, on macroeconomic development, social programs, and the state of the workforce.

What impact is the macroeconomic development in Azerbaijan having on the labor market and social protection of the population?

Social prosperity has been at the heart of the policies of the National Leader Heydar Aliyev. Starting from 2003, the policy of rapid economic development based on powerful economic potential has been successfully carried out by President HE Ilham Aliyev. Most importantly, a social development strategy based on the principle of social equality and justice has been realized. Major economic successes were accompanied by significant progress in the social sphere. A total of 1.36 million jobs have been created, including 1 million permanent ones, since 2004. The level of unemployment has dropped to 4.9% as compared to 11.5% in Europe and 10% in EU countries. Minimum wage has increased by 11.6 times, while the average income increased by 5.5 times and the average pension by 9.4 times over the last 10 years, exceeding the rate of poverty by 1.7 times. Azerbaijan is one of 147 countries to have joined the UN Millennium Development Goals in 2000, whereby it assumed the commitment to reduce the level of poverty by half by 2015. Over the decade alone, the level of poverty has been reduced more than 10 fold, or three times below the global rate of poverty. According to the latest UN report, Azerbaijan is ranked 76th among 187 countries in terms of human development.

What is the status of the targeted social assistance programs envisaged for different categories of the population?

One direction of the social policy is to improve the livelihood of the underprivileged population and enhance state support for these people. Expenses on social protection and social security have been increased eight fold in the past 10 years. At the beginning of 2015, monthly and lump sum benefits have been appointed and paid to more than 451,000 people, which is 4.4% of the population. In addition, more than 51,000 people are provided with presidential allowances. More than 23% of the country’s population is covered by the social security system. In the past decade, the amount of monthly social benefits has been increased by 2.6 times. Azerbaijan has adopted a set of flexible and effective measures to maintain macroeconomic stability and all social programs financed from the state budget have been continued and expanded. More than 10 presidential decrees and resolutions on social benefits for the most vulnerable population were signed in 2014. The average amount of monthly benefits for war veterans and persons of similar categories has been increased by around 50%, for veterans of World War II and by 81.8% and for Karabakh war victims. There has been a significant increase in the volume of social benefits paid to 80,000 people. The number of those receiving presidential pensions has increased by 50%. We have also started paying benefits to the mothers of five or more children, the tuition fees of handicapped Karabakh war veterans and families of victims in higher and specialized educational institutions. In 2014, we spent 20.8% more on monthly and lump-sum social benefits, pensions, and compensations.

Further evidence of the government’s focus on the social sphere is the provision of war veterans and people of similar categories with free-of-charge cars in 2014. In particular, all war veterans and people of similar categories who were in the line for receiving a free car, a total of 1,453 people, received one last year. In addition, the Ministry provided 174 people handicapped in the war with apartments. Also, according to a presidential decree, on June 20th, 2014, all war veterans and war-victim families registered for an apartment as of January 1st, 2014 are to be provided with one in the 2014-18 period. Multi-story apartment buildings have been built for handicapped war veterans and war-victim families in four districts of Azerbaijan and a total of 353 private houses have been constructed in 52 districts. Of these, 1,031 will be provided to handicapped war veterans and war-victim families in 2015. In addition, we are currently constructing an apartment building with 132 apartments and social facilities such as a training center for the visually impaired, a specialized social rehabilitation center for underage children, and a social adaptation center for those released from penitentiary institutions.

The labor and social security system is an area often subject to major change. What can you say about the key directions, objectives, and principles of these reforms?

The main objective of this system is to expedite automation of all activity of the Ministry, apply modern management techniques, create a transparent system, and eventually put in place a system accessible to all categories of the population. We intend to provide all services electronically. The reform of the Electronic Information System of Labour Contracts and its commissioning on the e-government portal has paved the way for making employment relations more transparent using electronic media, and facilitating direct, flexible, and objective state control over the labor market. It will also play an important part in preventing unlawful labor relations, strengthen the labor rights of hired workers, increase state budget incomes and social insurance payments, and contribute to the formation of a comprehensive database of the labor market. People will be able to use individual electronic carriers and information kiosks at post offices to apply for targeted social assistance. The automation of this system will eliminate the need for direct contact between civil servants and citizens, and provide people with broad access to different types of social assistance. Most families receiving social benefits face difficulty in applying for more assistance if their family composition or income has changed. In order to combat this, a recent order signed by the President has prolonged the duration of targeted social assistance from one to two years. We have recently introduced a complete automation of the process to determine the degree of disability. We have started developing a database of medical and social examination and rehabilitation within the Ministry’s centralized information system. This will enable a comfortable exchange of electronic information regarding disability examination among different agencies, which will contribute to greater transparency, minimize direct contact with civil servants, and help to eliminate unnecessary paperwork. The results will be accumulated in the system and be available to relevant state agencies upon request.

What measures are being taken in the country to improve employment opportunities for young people and facilitate the access of persons with disabilities to the labor market?

In 2014, a total of 62% of applicants, or 29,440 people applying to the Ministry for jobs, were provided with employment. At the same time, 3,786 people were sent into various training courses and 1,605 people engaged in paid public work. Young people constituted the majority of those provided with jobs. Azerbaijan is noted for a low level of unemployment among young people. The unemployment level among people of 15-29 years of age is 9.9% and among 15-24 years of age is 13.5%. This is lower in comparison with other countries. The UN ranks Azerbaijan among the top 10 countries globally for youth employment. As part of a project implemented together with the International Labor Organization, a group of young job seekers were provided with employment on the basis of subsidies. One of the main issues on our agenda is the provision of employment opportunities for persons with disabilities. In 2014 alone, our employment service provided a total of 1,036 people in need of social assistance with jobs. Of these, 249 were with disabilities. In the said period of time, 367 individuals with disabilities, including 60 visually impaired people, have been engaged in professional rehabilitation programs. The Ministry’s Center for Vocation Rehabilitation of Young People with Limited Health Opportunities, commissioned in late 2013, has proved extremely helpful in addressing the problems of job-seekers with disabilities, developing a strong material, and technical capacity to provide young people with various qualifications. Further reforms in the spheres of labor and employment will continue to be carried out in the Republic of Azerbaijan in order to bring the social protection of the population in line with contemporary requirements.