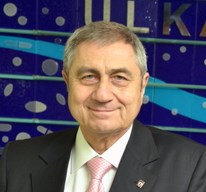 Exports to Over 50 Countries

Hasan Ulusoy is the chairman of Nobel İlaç, which is an affiliated company of Ulkar Holding and is a front-running Turkish pharmaceutical manufacturer and exporter headquartered in Istanbul. Mr. Ulusoy studied Chemical Engineering (BSc and MSc) at Technical University, Berlin (Die Technische Universitaet Berlin) and Business Administration at Technical University, Aachen (RWTH). He joined Nobel İlaç in 1978, and serves as the chairman since 1990. Mr. ULUSOY is also a member of Pharmaceutical Industry Association of Turkey (TISD) and American Turkish Council (ATC) as well as a member of Turkish Industry and Business Association (TUSIAD).

Share on:
“Save for a very limited number of exceptions, the entire population in Turkey is covered by health insurance.“

This is not the first time that we have been through the annual adjustment—it can happen upon any price increase. Since price increases are typically announced some time before the effective date, some companies choose to deliver products at the previous price as a sales argument. It is in fact no different than common surplus or rebate practices and it creates a demand from warehouses and pharmacies. As a company, we are not prone to compromise in sales, thus we do not have any special implementations to apply in such periods. We experience no problems in our product delivery either. Our supply system obliges us to make planning months in advance, and since we do not keep a large stock at the consumption channel, we cannot be open to extraordinary demands.

More broadly, how does the Turkish pharmaceutical regulatory structure support the healthcare sector, and what changes could be made to improve it?

Turkey is a global example in terms of drug legislation, production ability and capacity as well as access to drugs. We have a sufficient number of factories and R&D facilities in GMP standards that can readily satisfy the national requirements. About 150,000 physicians and 25,000 pharmacies produce about 500 million prescriptions annually and we convey 2.5 billion boxes of drugs to our people. While the system is sound, what is missing on the regulatory side is national regulation of biosimilar products. I have always said that such regulation will improve the market for Turkish pharmaceutical companies. What is in practice at the moment is mostly taken from Europe and the US and these regulations make it difficult for Turkish pharmaceutical companies to come to the market. If you look at similar countries success in biosimilars such as Russia, South Korea, India and China they have been operating with their own regulatory systems. Turkey can experience the same success with the implementation of a similar system.

How does the increasing strain on Turkey’s health insurance system impact the pharmaceutical industry and Nobel Ilaç’s operations?

Currently, save for a very limited number of exceptions, the entire population in Turkey is covered by health insurance. This is a benefit we should be proud of, since even among the developed countries, many are unable to provide it. However, such an inclusive system also brings about financing problems. In the past 15 years, along with the increase in the population and average age, the improvements in access to health services and medication have unexpectedly increased the costs. Just think about it, in the past 15 years, the number of referrals to a health center has increased fourfold per person. As of today, each of us visit a physician more than 8 times, have 6 prescriptions issued and consume 30 boxes of medicines a year on average. About 80 percent of drug consumption is financed by the public budget. We are proud with the level of services we have achieved as a country. However, the methods used when the financial resources needed to enable this system are scarce, cause a lot of suffering to our industry. Drug prices have been in constant decline despite inflation and increasing foreign exchange rates, thus the main agenda for the companies in the sector has been to survive. As Nobel, we enjoy a greater feeling of security due to the fact that our activities have not been limited to our efficient domestic operations, but we have also internationally expanded and become a net exporter. However, at the current point, we fear that drug supply in Turkey will no longer be sustainable and our culture of R&D and production will be damaged.

What investments has Nobel Ilaç made—in part through the 2023 vision—in the area of biosimilar drugs?

One of the main reasons for the funding problem I have mentioned above is that we are still considerably foreign-dependent in the field of drugs. Each year, the pharma industry incurs a foreign trade deficit of about 4 billion dollars. That’s why “reducing foreign dependency in drugs” has been introduced as a target into state programs such as the 10th Development Plan and the 2023 vision document. This is indeed the main purpose of the program that has been initiated to support the domestic development and production of biosimilar drugs. As you have mentioned, we have been chosen as the first company and are working together with TUBITAK on this project. The first stage of the project, namely the cell development, has already been completed. Next are the more advanced stages. We have made the necessary investments and have been progressing in a determined manner. This is very much in line with the general stance of our company as a champion pharmaceutical exporter with no foreign trade deficit. We consider the field of biotechnology as one of the most crucial conditions for future existence and success.

Another key area of investment for Nobel Ilaç is in injectables and other hospital products. Why were this area chosen?

First, we needed the injectables plant for the production of the finished biosimilar products. The second reason is to increase our exports. We are operating in countries where injectables are very much used and plan a lot of exports to those countries. Domestically, the use of injectables in Turkey is also increasing. As the government has built city hospitals which will enhance health tourism, the use of such products in the hospitals will increase.

Where are Nobel Ilaç’s most import export markets and where are you expecting to see the most future demand growth?

Currently, we have been carrying out marketing and sales operations in twenty countries through our own teams. We have been active in an extensive geographical region from Central Asia to Eastern Europe, in part through our international production facilities in Kazakhstan and Uzbekistan, which were our first steps in international expansion that started 20 years ago. These countries had a potential and were open to development. These facilities not only satisfy national needs but also provide a means for exports to the neighboring regions. More recently, our newest export destination is Russia, which is especially important to us as it holds a potential equal to the combined total of all the other countries we have been active in. It is difficult to gain a place in the Russian market but our initial results are very promising. As future endeavors, we have been considering Africa, Middle East and some European countries. We have already taken the first steps in some of them.

What are Nobel Ilaç’s most important ongoing investment plans and biggest objectives?

Our investments are ongoing in the biotechnology area, and our objective is to finish our facility and proceed with our project so that we can be in the market with these products by 2023 at the latest. Outside of that, we hope to continue to increase our domestic market share and to achieve our targets in our foreign operations.