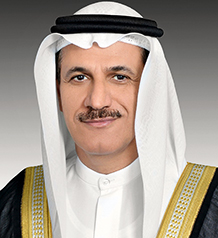 Head of the Game

Sultan bin Saeed Al Mansoori was appointed Minister of Economy in the UAE in February 2008. He holds a bachelor’s degree in industrial engineering and management systems from Arizona State University and also has a diploma in computer system analysis from the Institute of Computer Technology in California.

The UAE projects a growth rate of 4% for 2017. Which economic sectors will drive this growth and how will this rate contribute to the nation’s ultimate goal of diversification?

The non-oil sectors will provide the needed impetus to drive the country’s economy this year and beyond. As the UAE steadily moves toward reducing its heavy dependence on oil revenues, we expect to see a number of relevant initiatives and programs designed to strengthen vital sectors such as renewable energy, tourism, education, science, innovation, and information technology dominating government policies and regulations. This is clearly evident in the country’s Higher Policy for Science, Technology and Innovation, in which more than 100 initiatives worth over AED300 billion have been identified. These key initiatives cover the health, education, energy, transport, water, and technology sectors. As for the UAE’s economic performance, its real GDP grew by 3.8% in 2015, with the country more or less maintaining the same pace in 2016. This gives us a clear indication of the competitive and sustained progress of our national economy, even amidst all the challenges and difficulties that have negatively affected many economies worldwide, developed and emerging alike.

How have the ministry’s efforts to attract investors reflected in capital inflows into the country and what is the UAE’s current position in the global trade arena?

In terms of FDI, total flows to the country in 2016 amounted to about USD10 billion. The size of cumulative investments, on the other hand, reached about USD119 billion toward the end of 2016. We believe that the policies and legislation that the government is working to enact by 2017 will have a significantly positive impact on raising foreign investment flows into the country. Investment growth was not just limited to inflows, though; the volume of the UAE’s outbound investments stood at USD9.3 billion in 2015, up from USD9 billion in the previous year. This made the UAE the largest Arab foreign investor in 2015, with the cumulative balance of its investments reaching USD87.4 billion. The country also maintained its prestigious position as a regional and global capital for foreign trade and an influential import, export, and re-export hub. The UAE’s non-oil direct exports grew significantly in 2015, exceeding the previous year’s rate by 22%. For the first half of 2016, the UAE’s total non-oil foreign trade reached AED790 billion or USD215 billion. We estimate the continuation of this upward trend in 2016 with a growth rate of 5%, and in 2017 with a growth rate of 7%.

What have been the main initiatives of the Ministry of Economy to boost the industrial sector in order to reach the target of 20% GDP contribution by 2021?

Our initiatives involve providing support on all fronts for young local entrepreneurs and SMEs, giving them unprecedented access to an environment where they can thrive and play a bigger role in the UAE’s economic progress. Additionally, the ministry seeks out more key industrial investments to boost the growth of Emirati industrial companies and generate new jobs for UAE citizens. The approval of the Foreign Investment Law reflects the government’s commitment to prioritizing value-added projects in industrial sectors, among others.

You have been an advocate of the positive transformations the UAE Investment Law will bring about. How will this law foster FDI and the framework for fruitful PPPs in the country?

Since the new foreign investment law allows for 100% foreign ownership in government-approved sectors, we expect to see robust FDI and more fruitful public-private partnerships in the near future as a result of its enactment. The law has essentially made it easier for regional and international businesses to enter the local market and this access will arguably lead to an influx of investments from key markets at the regional and global levels. The local industrial sector and other domestic businesses will benefit from higher FDIs especially in terms of increased competitiveness and accelerated development.

The UAE has placed non-oil exports as one of its biggest bets for the years ahead. How would you assess the development of this sector and which industries are leading the way in propelling the country’s exporting capabilities?

We have made significant progress due in part to the government’s stronger emphasis on knowledge, innovation, advanced technology, human capacity building, and scientific research given their impact on the overall development process. Our economic diversification efforts have already resulted in high-performing non-oil sectors, which stand to increase their aggregate economic contributions to 4.6% by 2020. The UAE’s robust economic, trade, and investment relations with key Asian and African markets, as well as other countries, will drive our non-oil export and re-export activities in the short and long term. The rapid development of the industrial sector saw industrial investments rising from AED127.6 billion in 2015 to an estimated AED130 billion by the end of 2016, which contributed to around 12.1% to the non-oil GDP. Meanwhile, the tourism sector is another important contributor to the national income. It is expected to gain more importance moving forward under the wise leadership’s guidance and will further strengthen its role as a major feeder to the national economy and a reflection of the enormous potential and capabilities of the UAE. The country will rely more on tourism during the transition to a post-oil economy given its close association with many other sectors. It is considered to be a main driver for retail, shopping, entertainment, and aviation and plays a prominent role in generating jobs and stimulating investment flows to hospitality and infrastructure development. Moreover, it provides valuable opportunities for the success of small- and medium-sized enterprises. All of these and other efforts and endeavors will bear fruit in the near future and help gain more achievements in national and global economic indicators. The outlook is bright in light of UAE President Sheikh Khalifa bin Zayed Al Nahyan’s declaration of 2017 as the “Year of Giving.”