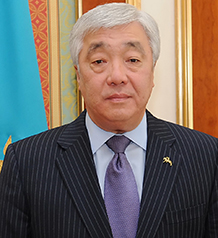 Head of the line

Share on:
What were the most significant foreign policy successes of 2015, and what is Kazakhstan’s role internationally? A key task for Kazakhstan remains the reinforcement of favorable external conditions in order […]

What were the most significant foreign policy successes of 2015, and what is Kazakhstan’s role internationally?

A key task for Kazakhstan remains the reinforcement of favorable external conditions in order to continue the course of reforms. The year 2015 was filled with events that once again confirmed the objectivity of principles of foreign activities of our nation: a multiple-vector approach, harmony, pragmatism, and the firm upholding of national interests. Along with that, the formation of a new architecture of security and geopolitical balance of powers accompanied by the deteriorating manageability of global processes requires from Kazakhstan the adaptation of new foreign political approaches and its more pro-active involvement in the settlement of global and regional problems. In this regard, Kazakhstan’s diplomacy will intensify in its efforts to peacefully settle heated regional conflicts. Kazakhstan’s admission to the World Trade Organization (WTO) opens up new opportunities for closer integration into global economic cooperation but simultaneously offers a new challenge to the competitive ability of the domestic economy. We strive to reinforce trust between countries because the deterioration of political relations almost simultaneously entails the disruption of economic ties. The most demonstrative example in that regard is the current cooling in relations between Russia and Turkey. Furthermore, we can become an integration hub for linking projects of the Eurasian Economic Union, the Silk Road Economic Belt, and the EU. We are open to anyone who sees fruitful cooperation on a win-win principle as his mission. This is the essence of our multi-vector policy. In the borderless space of the Great Steppe we have managed to build a modern, successful, and peaceful state.

How can Kazakhstan capitalize on the increasing global economic significance of Asian countries, and what is the country’s relationship like with this region?

In the context of growing global economic significance of oriental countries, in particular China, Kazakhstan can accrue significant benefit. As for China, their project Silk Road Economic Belt (SREB) within the initiative One Belt, One Road (OBOR) is interesting for Kazakhstan and we are already engaged in active cooperation to promote that project. We have all the prerequisites to create a uniform transnational transit and transportation network between Kazakhstan and China. The joint logistic terminal in the Port of Lianyungang, which in the future will link seaports in the Caspian Sea and Baltic Sea, will exert significant influence on growth of cargo transportations between Kazakhstan and China. We have set up a joint enterprise China-Kazakhstan International Logistics Company of Lianyungang incorporated on 24 June 2014 in Lianyungang. Authorized capital of the joint venture makes $68.8 million with a 51% stake ($35.1 million) in its authorized capital owned by Lianyungang Port Co., and 49% ($33.7 million) by KTZ Express. Overall, in the first five months of 2015, the port handled containers exceeded 65,000 TEUs and stored 193,000 tons of bulk cargo. Revenues from operating activities of the joint venture for the above-mentioned period made KZT213 million ($1.1 million). Additionally, Astana and Seoul are interested in intensifying mutually beneficial economic relations. The total volume of Southern Korean investments into our economy has exceeded $3.7 billion. Overall, South Korean companies have been involved in the implementation of 24 projects for a total amount of nearly $7.8 billion.

What sectors are the most promising for foreign investment over the medium term, and what are you expecting for 2016 in terms of inflows?

It is no secret that the priority development field for Kazakhstan’s economy is diversification. Priority sectors include six segments of the processing industry; metallurgy, chemistry, petrochemicals, mechanical engineering, building materials, and food processing. Moreover, for investors in priority sectors, a separate package of investment privileges and preferences has been prepared to include stable laws, tax privileges, compensation of up to 30% of capital costs of an investor, and the streamlined import of foreign manpower.