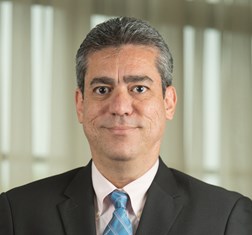 Dr. Miguel A. Mayo is a graduate of the faculty of medicine of the University of Panama with a specialty in gastroenterology and gastrointestinal endoscopy. He has worked as a specialist in internal medicine at Hospital Santo Tomás, medical specialist in gastroenterology and gastrointestinal endoscopy at the Hospital of the Social Security Fund, and medical specialist in the same field at the Hospital San Fernando Panama Clinic. He has been a Medical Manager at ASSA Compañí­a de Seguros S.A. Panama, from 2006-2014.

Share on:
TBY talks to Dr. Miguel A. Mayo, Minister of Health, on his three-pillar mandate, budget allocations, and preventative care.

How do you evaluate your mandate during your term and especially in 2017?

This needs to be evaluated according to the objectives I set at the start of my term. We drew three pillars for the Varela administration’s health policy: a human resource plan that had never existed, primary health care aimed at changing the management model from a curative strategy to a preventive strategy, and health infrastructure. The public health system in Panama is a bicephalous system, where the social security fund and the Ministry of Health (MoH) are health providers. In 2014, a dialog was called for the transformation of the health system and three tables were set up: a human resources table, a transformation table, and an economic table. Significant distortion in the salaries of health professionals led to a human resource shortage. The yearly quota to study medicine in the University of Panama was increased by 100, of which 15% must be students from indigenous regions. Similarly, quotas were increased for nursing, nurse technicians, and clinical laboratories. Two previously closed careers of health promoters and vector inspectors were reopened. Within the transformation table, a white paper was created, which is the road map of the coordinated health system between the social insurance fund and the MoH, whose vision is that all people can be attended to in any health facility, regardless of whether the patient has social security. Moreover, we have made important changes in specific areas, such as the national pharmacy and drugs administration. The infrastructure costs dealt us a blow; it took between 18 and 24 months to release four hospitals for which construction had been halted by the previous administration. These hospitals are set to be completed by 1Q2019. Our plans for infrastructure are focused on the expansion and improvement of primary health centers.

Regarding the budget of the ministry, in what areas has the budget been allocated?

The budget of the MoH is a little over USD2 billion, representing almost 10% of the national budget of USD22 billion. Infrastructural investments take the biggest chunk of that budget at around USD700 million; the biggest infrastructure investment is the Panama Sanitation Program—a state project that has been through three administrations already. The four previously mentioned hospitals and other mega projects, such as a children’s hospital and oncology hospital, make up our current list of major investments.

How is Panama working to implement preventative care mechanisms?

President Varela devised a strategy that is called national census of preventive health. Through this plan, Panamanians over 40 will be registered in the medical center closest to their residence before undergoing a series of examinations and tests. They are tested for four diseases from which 70% of Panamanians suffer: diabetes, high blood pressure, dyslipidemia, and obesity. The government wants to reduce the complications that these patients will suffer during the next 10 years. This is one of the strategies that I would push the incoming health minister to continue.

What is the ministry doing in regard to counterfeit medicines in the pharmaceutical industry?

Since the constitution states that all health professionals must be Panamanians, we have had to put a special effort into having inspectors keep a check on unskilled health professionals. We have invested in human resources for the national pharmacy and drugs administration, increasing the number of inspections for sanitary registrations and inspections by registration. We have made agreements with INVIMA of Colombia and with the Spanish agency of medicines and sanitary supplies to share database and knowledge of similar inspections. The ministry has developed a free app to increase access to technical health advice and find a list of registered health professionals.