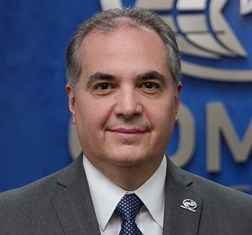 Héctor Villarreal Muraira is an industrial engineer from Tec de Monterrey. He also holds a master’s in management from the same institution. He has been in several positions related to organizational development, business strategy, sales, and marketing, among others. He has been Managing Director of COMCE Noreste since 2015.

Which sector do you consider the most dynamic considering the impact of the pandemic?

As a result of the pandemic, some sectors have been more active than others and have performed better as a result. For example, the construction and home renovation sector is doing particularly well given the long periods of time being spent at home. The food sector has also grown, specifically supermarkets and food delivery. The metal-mechanic industry also performed well this year. On the whole, every traditional exportation sector has recovered and is growing even more than before the pandemic. 2021 will be a good year, given the fact that the US will need to update its equipment and infrastructure. This will positively impact several sectors in Mexico.

How have you adapted your modus operandi to launch external trade?

In order to get all these products to other countries, logistics and keeping competitive across all routes are essential. This includes all means of transportation and its costs, because if you do not calculate your logistics costs well, when you reach the market you might end up with a much higher final price than anticipated. For example, China has become more expensive lately and that has affected some companies, forcing them to turn to Mexico and other countries to become more competitive. In the last year, interest in exports and commercial relationships with Asia has grown. There are more Asia-based companies that want to install operations here in order to export to the US. Furthermore, now there are many companies that are not only looking to export from China but to China.

How has your plan for diversification been developed?

It has been difficult because there were doubts as to whether NAFTA would be renewed. This caused concern, and we decided not to rely solely on the US. It was then when we realized that we had to diversify our markets. However, we were unable to diversify as we had envisaged, and USMCA was later signed and now, pretty much of our business continues to come from the US. We have developed a diversification plan with Central and South America, though the reality is that 80% of Mexican exports go to US. In other words, the US market has so much potential that it is difficult to diversify. Only medium-sized and large corporations that already have a strong presence in the US dare to break into other markets.

How are you helping fill in the void caused by the closure of ProMexico?

We are a non-profit private initiative, and our mission is to help and promote Mexican foreign trade not only within our membership, but also with any company or person who approaches us for assistance. With COVID-19, we had to carry out all our courses, seminars, and services, such as diagnosis and consulting via online. This was not easy because we had barely digitalized. First, we started offering free webinars and later introduced longer and more complete paid courses. This went well because we had both local participants and participants from across the country.

Why is it important to incentivize more foreign trade activity in Mexico?

Foreign trade activity is fundamental for the economic development of our regions and our country as a whole. This has been the case since the signing of NAFTA. The growth of foreign trade, which has been steady, has led to significant growth in terms of Mexico’s GDP. In fact, currently about 72% of GDP is made up of foreign trade (exports and imports). Therefore, as long as we have more companies participating in international markets, this generates more international trade, which in turn boosts GDP. The more GDP Mexico generates, the better we can develop our regions, states, and cities. All these will generate a sense of economic well-being for the people.