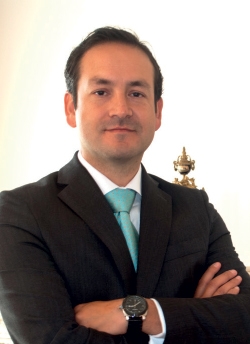 Julián Andrés Quiceno Carmona has an educational background in marketing and has over 10 years of experience in project management and business and financial analysis. He also has key experience in the areas of logistics, services, communications, and energy. He is currently the CEO of CELPA Permanent Free Trade Zone.

Share on:
The Cauca Valley has managed to attract and successfully host international events such as the VII Pacific Alliance Summit and the World Games of 2013. How has the region worked […]

The Cauca Valley has managed to attract and successfully host international events such as the VII Pacific Alliance Summit and the World Games of 2013. How has the region worked to better position itself in the international arena?

Those involved in regional development have the common goal of building trust. Fortunately, too, Cali and the region are two prosperous areas of Colombia that for unfortunate reasons suffered from serious deterioration in the past. However, over the past few years, the local authorities, along with the national government, have worked to turn that situation around. This is why building trust is important, and I have to say that we have succeeded so far.

What advantages does the Pacific Alliance offer to the Valle del Cauca region?

I think such initiatives are key to strengthening the formalization of employment in the region. For example, our free trade zone (FTZ) brought in a business model that hadn’t been implemented here before. Such elements boost the industrialization of the region, too, improving the development of regional cities and generating employment opportunities.

What role does CELPA play in the government’s efforts to generate formal employment opportunities linked to the development of Buenaventura?

We operate in a city where unemployment and informal employment once had a major impact on the local economy. I would even say that the ports were the only two entities generating significant formal employment opportunities before our arrival. In this context, we were established in 2012, and we implemented an employment strategy along with the national government that included large investments and the generation of qualified human resources that, in turn, made investment in our FTZ more attractive. In this context, we started implementing training courses in 2H2013 to teach a broader section of the local population about the technical and operational aspects of FTZs.

Colombia offers a highly attractive, competitive, and interesting FTZ business model. In this context, CELPA enjoys a privileged geostrategic location next to the main maritime infrastructure on the Pacific coast, which handles roughly 50% of Colombia’s foreign trade. This activity impacts Colombia’s entire economy. CELPA is the base, offering services that address the demands and requirements of the Port of Buenaventura. The port is in a process of specialization and we are the industrial and logistics platform that will achieve this.

We plan to invest $50 million in the urbanization and development of infrastructure in the FTZ. Currently, we have already invested $15 million as part of the first stage of development of the overall project. We are aware that we hold in our hands a promising and interesting project; however, we need to build trust among the investor community, which is only achieved by demonstrating the tangible development of the project itself. In this context, certain large banking institutions that believe in this project are supporting us, which definitely helps to build credibility. Also, I think we have achieved a common understanding between local authorities and the private sector on the future development of the city and the wider region. Therefore, this has been our main focus at this stage of development; to build trust and show that we are developing an economically viable and significant project.

What are the competitive advantages of CELPA as an FTZ?

We offer a promising and real platform in Buenaventura that did not previously exist. We are an industrial and logistics platform that offers total legal security and support, located next to the Port of Buenaventura, which helps to reduce production costs. CELPA allows investors to get a return on their investment within five years thanks to the tax environment that we offer, which means more efficient and profitable companies make the FTZ their base.