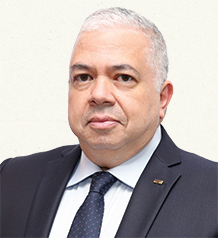 Hussein Fouad El Ghazzawy started his career with Schlumberger in 1984 as a Field Engineer for the Drilling & Measurements (D&M) segment in Egypt, Pakistan, Nigeria, West Africa, and in 1992 moved to a Field Management position based in Port Harcourt, Nigeria. From 1995, he held various Managerial and Regional positions in charge of D&M segment business in North-East Africa and East Mediterranean (Libya, Egypt, Sudan, Kenya, Tanzania, Syria, and Jordan). In 2001, he became the D&M Segment Area Marketing Manager responsible for Middle East and Asia countries based in Dubai. In 2003, he was assigned as D&M Segment Regional Manager for the Gulf region based in Abu Dhabi covering UAE, Qatar, Oman, and Yemen. In August 2007, he became General Manager for Schlumberger in Yemen. In May 2010, he started his current assignment in Abu Dhabi as General Manager and Vice-President for Schlumberger in the UAE. Hussein has earned a BSc in Geology and Geophysics and a Master’s in Petroleum Geology from Ain Shams University, Egypt.

What are some of the new technologies that you are bringing to the market here?

We were pleased to have had the global launch for the GeoSphere reservoir-mapping-while drilling service here in Abu Dhabi in May of 2014 and GeoSphere won the ADIPEC award for Best Technology and Innovation in November of the same year. The GeoSphere service allows you to see up to 35m from the well bore, revolutionizing the ability to map the reservoir as it is being drilled. If we look at reservoir characterization and seismic data processing, we have one of the largest centers in the region. We are acquiring seismic data and one of the technologies we have introduced here is called the UniQ service, which is a single point source receiver that offers high fidelity seismic data enabling the imaging of structures never seen before. We have also introduced the Saturn 3D radial probe, which is a reservoir-sampling tool. We have always lead the way in sampling technology; however, Saturn takes it to a new level and allows the acquisition of samplings in much tighter formations while significantly reducing the risks of getting stuck while sampling. This benefits the drillers and allows us to acquire samples in formations that were previously difficult to acquire.

What does the next phase of technology look like at Schlumberger?

As far as the UAE market is concerned, the main technical challenges are extended reach drilling and the sour gas development by Al Hosn and Shell. We are looking to enhance the existing technology to meet the increasing complexities within the extended reach and sour gas environment in the UAE, where there is high H2S and high CO2. Most importantly, it is about the reliability of that technology. We have an Excellence in Execution initiative to achieve this. A key concern for the whole industry is reliability of technology. To address this, Schlumberger launched an Excellence in Execution initiative to improve tool reliability and to further operational excellence. Another area where service providers can play a key part is in efficiency. We are reducing our footprint in the fields by doing some of the jobs remotely where we can control the tools and communicate off-site. Our remote operations are definitely complimenting new technology as well.

How is Schlumberger adapting to the declining price of oil and in what ways do you expect the market to adjust?

It has been made certain that the UAE will carry on with all their major projects. We will have to see how new projects will be affected. As service providers, we are in a bubble. We expect there will be pressure on compensation and the pricing of our services, which is something we saw coming. Our role is to maintain the efficiency and the reliability of our services, which translates to more cost effective solutions for our clients. Simply giving discounts is not necessarily the right solution. We maintain our focus on offering reliable tools whether oil prices go up or down. It is a continuous process and commitment we have with our clients and the UAE. We are continuing with several of our internal transformation initiatives, which are transmitting into more efficient, more reliable services, overall, giving more cost effective solutions to our clients.