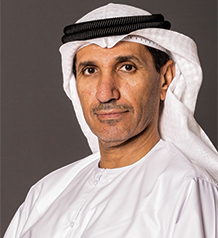 Dr. Eng. Mohammed Nasser Al Ahbabi is considered one of the most qualified national leaders within the space industry, known for his leadership, management and strategic planning skills. He is an expert within satellite communications, information systems, and modern defence concepts. He led the creation of the UAE Space Agency, which was established in 2014. Al Ahbabi has tremendous experience in civil and military work and academia. He became a telecommunications officer for the UAE Armed Forces until he reached the rank of Major. During that period he also worked as a coordinator for Dubai Internet City until 2000, then as a telecommunications officer and a project manager for Yahsat military division from 2005 to 2012. He has a PhD in communications from the University of Southampton, UK.

Share on:
TBY talks to Dr. Eng. Mohammed Nasser Al Ahbabi, Director General of the UAE Space Agency, on the mandate of the agency, cooperating with international space agencies, and developing a solid private ecosystem.

How has the mandate of the Space Agency adapted to the evolution of the space sector?

The entire UAE Space program has established roots and can be credited to the late Sheikh Zayed’s vision in the 1970s, when he started asking questions about space missions. At that time, there was no specific program, though there was an underlying interest in educating people. In 1997, Thuraya Telecommunications Company was set up, the first mobile satellite communications company that now owns and operates two geostationary satellites. Then, the Emirates Institution for Advanced Science and Technology was launched, which later merged with Mohammed bin Rashid Space Centre. Mubadala established YahSat in 2007, and the government realized it needed an umbrella in 2014 to oversee all these players, creating the UAE Space Agency, and outlined its mission to Mars as part of its National Space Vision. The significance of this Mars mission is dual in its nature. For the government, the most important thing has been the journey, not the destination; namely, how many people we can inspire, how much we can learn, and how many skills we can acquire. In addition, we try to include a scientific purpose to the entire journey to understand what learning lessons can be transferred on Earth. We need to team up with the international space community to ask big questions not specific to countries, but to humanity.

What major learning points is the UAE Space Agency taking from the financial and legal framework being set up for the Mars mission?

We were also mandated by the government to create a sustainable space program and to do so we need quality and precision, which requires us to work by the book. People are busy with social and political problems, though we are trying to show our regional neighbors that even in these hard times through science and technology one can regain world respect and demonstrate it is possible. We are working on a Space Law and will be one of the few countries with a comprehensive space regulatory framework. Our space program is for peaceful reasons, and it requires long-term planning, focusing on human capacity, and the next space engineers. This is where we work with universities and research centers, and push for social media and awareness campaigns.

How does the UAE Space Agency seek to strike a balance between transferring technology skills and knowledge and maintaining control over its intellectual property?

We are hungry for knowledge and cooperating with international space agencies provides a fantastic overlap. We need to work and engage with people in a practical way. We send people to work with international agencies to be exposed to what other scientists are doing and the best practices. We are active; we have signed over 20 agreements and have established an international advisory committee. We want to receive advice from people from all over the world, each with their own sectorial knowledge, within the space industry. We meet twice a year and they help us engage with different stakeholders.

What is the best way forward to attract and promote young Emiratis to become space scientists and technology pioneers?

The UAE has announced a plan to establish a human space flight program to develop astronauts. These are all big projects that have spurred a great deal of interest from young people. Our regional neighbors are looking on with curiosity at our efforts. Most international space agencies come here because they appreciate what we are doing in this small country.

How can the UAE spacy industry develop a solid private ecosystem?

We are putting in place the right regulation to attract and protect investment in the UAE space program. The government is funding exploration missions, though we want to see the private sector play a greater role, similar to YahSat for example, in bringing value and assets into the country. I assisted to the launch of Al Yah 3 satellite, which will provide vital connectivity to over 600 million people in Brazil and South America. We are also looking at strategies to attract international investors, working with local governments. We are harvesting the space program to showcase the world our competitive advantage.