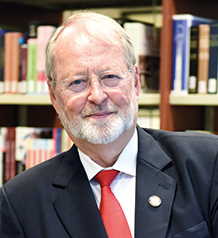 As Chancellor of the American University of Sharjah, Dr. Björn Kjerfve is responsible for implementing the university’s overall mission and strategy in accordance with the decisions of the Board of Trustees. Prior to joining AUS, Dr. Kjerfve was President of the World Maritime University, where he served from 2009. Between 2004 and 2009, he was the Dean of the College of Geosciences and was a Professor of Oceanography at Texas A&M University. Dr. Kjerfve holds PhD, MS, and BA degrees from Louisiana State University (marine sciences), University of Washington (oceanography), and Georgia Southern University (mathematics), respectively.

Share on:
TBY talks to Dr. Björn Kjerfve, Chancellor of the American University of Sharjah (AUS), on the role of the institution in the Emirate.

How was 2015 for AUS? What have been your main achievements?

The 2015-2016 academic year was one of growth and development for the university in many areas. In particular, it was a year of defining strategic research goals. AUS has developed a strategic research plan, developed additional academic programs, and defined a new position for a Chief Research Officer. As part of that vision, HH Sheikh Dr. Sultan passed an amiri decree establishing the Research, Technology and Innovation (RTI) Park as a Free Zone Authority for research and innovation. The RTI Park will provide an environment for research, innovation, and creativity, as well as support, encourage, and develop synergy with research and academic programs at AUS, and help promote Sharjah as a global research and technology hub. Since its inception, AUS has been committed to academic excellence. We keep enhancing our curriculum in sync with international economic and social developments and the demands of the marketplace. Our board of trustees has approved the university’s first two PhD programs in engineering and business administration. The board has also granted approval for a new master’s degree in biomedical engineering, which is a collaborative program between our College of Engineering and College of Arts and Sciences. On the undergraduate front, we have received board approval for bachelor’s degree programs in physics and in psychology.

Do you find that the university’s achievements have been able to move beyond the immediate academic environment to having an impact in the real world?

AUS is committed to making sure that the knowledge and expertise imparted in the classroom have a bearing on the “real world.” We place great emphasis on critical thinking and problem solving. Earlier this year, along with the Mohammed bin Rashid Space Centre (MBRSC), AUS announced the completion of the design and building of the communication nanosatellite, Nayif-1. The UAE’s first nanosatellite was developed by Emirati engineering students from AUS under the supervision of a team of engineers and specialists from MRBSC within the framework of a partnership between our two institutions, aiming to provide hands-on experience to engineering students in satellite manufacturing. We hope this association will go a long way to providing skilled individuals equipped with the wherewithal to support national and regional development.

How is the university building relationships with other international institutions and are you working to attract foreign investment to your university?

Our goal is to become the leading research university in the region, and developing strong bonds with international institutions is an integral part of our vision. Central to the university’s values is the goal set by HH Sheikh Dr. Sultan, wherein AUS is committed to becoming linked with the economic, cultural, and industrial sectors of society. For such a collaboration to become meaningful, it is essential that arenas of cooperation are extended beyond our immediate environment. Therefore, from the very inception, AUS has always reached out to other reputed international institutions of higher education and has established relationships with them at various levels and in a wide variety of fields.

What is your outlook for Sharjah over the next five years?

Under the guidance and leadership of HH Sheikh Dr. Sultan, the Emirate has earned renown for its distinct cultural identity and as a center of world-class academic institutions. These are exciting times for Sharjah as it undertakes some dynamic projects in sync with its long-term development plans. The Emirate’s GDP is growing rapidly every year. Its manufacturing sector is one of the most important ones in the region with some 20 industrial zones and two thriving free-trade zones. It is also important to note that the Emirate is one of the few diverse economies in the region wherein no one sector represents more than 20% of GDP.