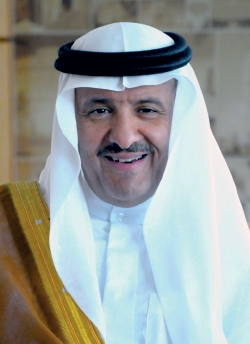 President & Chairman of the Board, Saudi Commission for Tourism and Antiquities (SCTA

HRH Prince Sultan Bin Salman Bin Abdulaziz Al Saud, President & Chairman of the Board of the Saudi Commission for Tourism and Antiquities (SCTA), was born in Riyadh on June 27, 1956. He received his Master’s in Social and Political Science from the Maxwell School of Citizenship and Social Affairs, University of Syracuse, in 1999. Prince Sultan bin Salman is a former Royal Saudi Air Force pilot, and is the only Saudi citizen to travel into space; he flew aboard the STS-51-G Space Shuttle mission as a Payload Specialist.

Share on:
In terms of the larger development of tourism as a sector of the Saudi Arabian economy, where do you feel that it fits in the trajectory of economic and cultural […]

In terms of the larger development of tourism as a sector of the Saudi Arabian economy, where do you feel that it fits in the trajectory of economic and cultural development?

The Ministry of Labor says that tourism is the single most important opportunity to create jobs, and our initiatives have already created employment for thousands of people in a sector of the economy without any loans, cheap gas, or any other incentives. That is a very big statement. We believe that job creation in Saudi Arabia will come from the people and SMEs that provide services rather than large-scale enterprises.

In addition, we believe that tourism and cultural development are critical to a country’s well being. For people to connect to their country, they need tourism services, such as transport, hotels, apartments, and events, as well as places to go and things to do. Tourism development is critical, because it enables people to make their country the first choice for where citizens choose to spend quality time with their families. It is about job creation and energizing the service industry, the construction industry, and the other sectors that benefit from tourism.

How do you plan to structure future regulatory changes?

This year, I completed a marathon session with the Council Of Ministers to get a new antiquities heritage law approved. That law has been through many cycles of revision, but will soon be implemented. In the past, we restructured the whole tourism industry from the bottom up, beginning with the master plan that was approved in 2005. The antiquities law has taken us seven and a half years and incorporates the lessons from that progress. One of the major wins we have achieved, which also shows the government’s confidence in this organization, is that we obtained an exception from the law to create the first public—private business association in the Saudi economy. That was approved in June 2014, and we are now forming the first three associations in the fields of accommodation, tourism and travel, and tour guides. Tour guides, as an industry, were practically non-existent in Saudi Arabia. Now, we have more than 250 fully trained tour guides. We want people to represent this country and where it comes from. It is an important country to us, to all Muslims, and to the rest of the world in terms of its position, place, and economy. We are rediscovering our history and the history of Islam with these new initiatives. We are exploring the country. Never before in the history of Saudi Arabia have we had so much work happening at the same time. There are more than 30 archaeological teams from all over the world excavating in Saudi Arabia.

Is there or a timeframe or the possibility of allowing tourist visas again?

We have only temporarily halted attracting tourists from outside the country. The US has about 300 million people, and maybe 40 or 50 million tourists visit every year—that is about one-quarter of the population. In Saudi Arabia, we issued 10.7 million visas in 2013 with a much smaller population. We are not a closed country, and we are not against people coming. We just want to wait until the sites are ready. Therefore, we will open up Saudi Arabia again eventually. It may be site-specific, such as Mada’in Saleh; however, we have opened it before and had no problems whatsoever. We loved the experience. Now, we are targeting markets that are already beginning to open. For example, in 2014 we are opening it to Umrah visitors. People from 65 countries, including Muslims from the US and the UK, will come to perform Umrah and be able to convert to a tourism visa.

However, the most important tourist we are going to target is the Saudi tourist. Saudi families are, I think, one of the top-five spenders in the world today. I would be ashamed if I were sitting here pursuing tourists from all over the world and my own people were traveling abroad because they cannot find the services they want or spend the leisure time they want on a one- or two-week vacation in their own country.