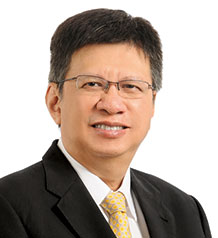 House on the Hill

Chung Chee Leong is the President & CEO of Cagamas Berhad, Malaysia’a national mortgage corporation. He is also a member of the Advisory Board of the Asia Pacific Union for Housing Finance (APUHF) and the Chairman of the Asian Secondary Mortgage Market Association. He has 29 years of experience ein central banking, and has occupied positions including Director of Bank Negara Malaysia’s (BNM) Banking Supervision Department as well as the Risk Management Department. He holds a bachelor of economics degree, majoring in business administrations from the University of Malaya.

Share on:
"For the last 29 years, we have promoted home ownership among Malaysians and issued MYR290 billion worth of bonds and sukuks."

How has Cagamas met its goals of providing broad-based house ownership and growing the secondary mortgage market?

For the last 29 years, we have promoted home ownership among Malaysians and issued MYR290 billion worth of bonds and sukuks, refinancing about 1.7 million houses in the process. In the 1980s, banks were reluctant to provide home loans due to the huge maturity mismatch and liquidity risks. Lending was long term while deposits were short term, which is why Cagamas facilitated the intermediation process, tapping into capital markets and providing such long-term funding to financial institutions. In turn, they could provide loans to house buyers. Banks are doing a great job in asset liability management. As the largest issuer of private debt securities in Malaysia, Cagamas is a regular issuer in capital markets. In terms of funding costs, the yield for Cagamas papers is just a few basis points above the government-guaranteed paper, and the yields are slightly lower than other AAA issuers. We could still go to the capital market, mobilize the fund, and pass it on to banks at a lower cost and they could then pass the benefits onto end borrowers. We act as one of the liquidity providers to financial institutions and provide funding stability for long-term home loans. In terms of promoting greater home ownership among Malaysians, we have been successful and about 25-30% of the portfolios of most banks are currently in housing loans. Currently our banks are actively providing housing loans. We have also helped the government fulfill its objectives in terms of providing affordable housing and helping young adults to get loans from a bank. We do this via two government schemes: the First Home Scheme and the Youth Housing Scheme. One provides home loans for people under the age of 40 while the other is for married couples who earn less than MYR10,000 as a couple or MYR5,000 individually. They can borrow up to 100% from the banks, with the first 10% guaranteed by our sister company, Cagamas SRP. The government of Malaysia pays the guarantee fees. These programs aim to help gainfully employed young people become homeowners.

How would you describe the growth of the secondary mortgage market?

We issued sukuk and bonds to the market to support our purchases in the secondary mortgage market. To date, we have issued approximately MYR290 billion worth of bonds and sukuk. Even during periods of economic crisis, investors were buying Cagamas papers; in fact, there were more buyers of Cagamas papers than usual, demonstrating the strength of Cagamas. We have never had a single technical default in our history, which is one of the reasons why we received a Moody’s rating of AAA in 2013. We have entered the international capital market as we are seen as a market leader in the domestic capital markets. In terms of pricing, other corporate issuers use Cagamas as a benchmark.

Malaysia is the global leading sukuk-issuing country. How significant is this for Cagamas’ portfolio?

About MYR80 billion of our total bonds were sukuks. Sukuks are popular because the Malaysian government, the Central Bank, and the securities commission have put together a complete financial ecosystem, including Islamic banks, Islamic securities companies, takaful operators, and Islamic pension funds, which provide ready demand for sukuk issuance. The demand for sukuk is greater than conventional bonds. Sukuk yields are often lower or the same as corporate bonds, whereas the reverse holds internationally. The Islamic finance ecosystem, the infrastructure, and the tax incentives all contributed to the success of sukuk. In 2015 and 2016, we issued sukuk in Singaporean dollars, the first company to do so. We can issue in any currency, depending on pricing and demand.

Your issuances are mostly in ringgit, which devaluated last year but is on an eight-month high against the dollar. How do you anticipate and strategize on currency volatilities?

When we issue in foreign currency to fund a purchase in ringgit, we make sure they are fully hedged through a cross currency swap; we would not take on any foreign exchange risks. In terms of foreign currency issuances, there are three variables: the benchmark—for example, for dollars it would be the US Treasury. The second is the spread over the benchmark, which depends on our credit rating and investors’ perception of the company and country. There is also the cross-currency swap. When the currency is volatile, the cross-currency swap risk is not favorable because the bank would take a bigger margin to hedge its own volatility as well. If a currency is more stable, it is probably easier to get a cross-currency swap at a more reasonable and competitive price. When the currency is weak, there are a number of foreign investors who come to Malaysia to buy Cagamas ringgit papers. Previously, foreign investors were only buying up Malaysian securities, and not corporate papers. In fact, when Cagamas issued foreign currency bonds in the public issuance in dollars, approximately 70% was allocated to foreign investors, with just 30% going to Malaysian investors. However, foreign investors are now interested in investing in Cagamas ringgit papers too, since they are more familiar with Cagamas’s name. The weaker exchange rate attracts them but, when the ringgit is stronger, things may change again.

How have SME loans in Cagamas developed?

In 2012, we did a strategic review of Cagamas and presented the results to the stakeholders. We said we would continue with mortgages, but also wanted to look at other sectors where we could replicate our success in the housing sector to help the development of the Malaysian economy. We looked at SMEs and infrastructure but chose education and health—people still need to go to university and hospitals reardless of economic factors. Part of our strategic focus is to participate in these areas of development.

How does Cagamas tie into the Eleventh Malaysia Plan?

Our support for homeowners, SMEs, and infrastructure projects all contribute to the Eleventh Malaysian Plan strategy and are in line with the future development of the country. There is a large funding requirement concentrated mostly on infrastructure projects, and we will look at the developmental needs of sectors that we can replicate using our current model. The Eleventh Malaysia Plan focuses greatly on affordable housing, which is why we are talking to PR1MA, a government-established company tasked with developing affordable houses. We hope to contribute to the government’s agenda in that area.

What are your goals for the next year?

We do expect to do a bit more than 2015 but that depends on the market. We can raise up to MYR20-30 billion in sukuks and bonds, but we need to allocate these funds for purchases of loans. When banks sell us loans, we would tap the market and issue bonds or sukuk. To date we have issued MYR3.4 billion worth of bonds and sukuk. Loan growth among banks is a little sluggish right now, and banks’ needs for liquidity have slowed down. We will still be able to do a bit more than we did last year. We issued around MYR6 billion in 2015; this year, we envision about MYR8 billion.