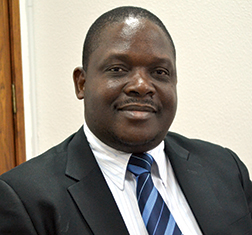 Emanuel Chaves is Chairman and CEO of the Aeroportos de Moçambique. He obtained his Bachelor’s and Master’s degrees in Economics and Management from the Catholic University of Mozambique. He moved to Maputo in 2006 and became head of ADM in 2013. He has recently completed an aerospace MBA from Toulouse Business School, France.

Share on:
TBY talks to Emanuel Chaves, Chairman and CEO of Aeroportos de Moçambique, on the opportunity for Nacala to become a new aviation hub on the east coast of Africa.

How would you describe the new Nacala International Airport infrastructure?

The project cost was around $250 million. It had to be expanded as there were many adjustments made throughout the project, although the initial estimate was around $130-150 million. There were some substantial changes to the project; for example, while the initial scheme envisaged a rehabilitation of the existing railway, we had to build an entirely new scheme, which required massive investment. Also, we had to expand the facilities to make it a future hub. The inauguration took place on the December 13, 2014.

What is your strategy regarding air transport agreements and MoUs to bring traffic into the airport?

We are in talks to partner with certain huge brands. In handling, we will have one of the largest operations in the world and are considering three handling companies. In Maputo, we have the Mozambique Handling Services company (MHS) and are tendering to sell a 51% stake in it, as we want to bring in a strategic partner in order to ensure that we deliver international-standard service. Another strategic partnership will be made with a catering company. Today, the catering company is owned by the airport and Linhas Aéreas de Moçambique, but we have companies interested in a joint venture. We are also considering bringing in an airport operator to partner us in managing the airport as soon as there is a clear strategy and capacity to attract more airlines. We want a dedicated airport operator with a huge capacity to mobilize airlines to Nacala. Currently, we have secured almost 90% of personnel already trained to operate Nacala International Airport. Our company is 100% Mozambican with all Mozambican employees highly trained to international standards.

From which countries will people be able to fly directly to Nacala?

Initially, we have Linhas Aéreas de Moçambique securing domestic flights. We have also already secured South African Airlines flights to Nacala. We are quite certain, too, that Ethiopian Airlines and Kenyan Airways will operate flights. Kenyan Airlines is already flying to Nampula and will shift its flights to Nacala, and Ethiopian Airlines is already willing to fly to the north of Mozambique and will be open to flying to Nacala. There needs only to be an update of the bilateral agreement in order for them to fly there. Qatar airlines, TAP, and JAAL will also consider flying to Nacala given that bringing people to Maputo and then traveling two and a half hours to the north is impractical. We also have almost confirmed intentions from Lufthansa, Air France, and Emirates to fly to Mozambique. Linhas Aéreas de Moçambique is entering into a partnership with Air Austral from Reunion because many people from Reunion are also keen to invest in Nacala. The director of ENI Mozambique has shown clear interest in linking Nacala to Milan and Oporto. Also, from Anadarko we have heard that there is a need for flights from Houston to Mozambique. From 2015, there will be a large market linking Asia to Mozambique. Nacala Airport can handle aircraft such as Boeing 747s and 847s, and also Airbus 380s.

What are the main competitive advantages of Nacala becoming the main hub on the east coast of Africa?

Nacala has many natural advantages compared with other hubs. Dar es Salaam is very close to Nairobi. And from Nairobi to Nacala is two hours’ flight, while Nacala to Johannesburg takes two and a half hours. Secondly, Nacala is located close to a future significant port on the east coast, which is a good combination for a successful hub. Nacala is closer than Nairobi to Singapore, Australia, and other countries, as Nairobi is inland and Nacala is on the coast. Mozambique stands to surpass the GDP of both Tanzania and Kenya over the next 15 years, which will be reflected in air travel statistics. Nacala is closer to the sea than Johannesburg and Nairobi, meaning more savings on fuel at departure and more luggage being carried on departures from Johannesburg and Nairobi. This region represents 120 million people and is growing at an average rate of 5%, while Tanzania and Kenya are at 7%. So as Africa reaches 2.3 billion people by 2050, the area will have almost doubled. In the short run we still need to grow capacity and connectivity in Nacala, and if we do so capacity will surpass that of Nairobi.

How would you assess the expansion of the Pemba airport, which was inaugurated in March?

We made a small investment of about $5 million on the runway and terminal to cope with the demand of the next four years, while concluding the plans and construction of the new Pemba Airport. We are at the design and feasibility study phase, and expect to submit proposals for study in 2015.

What is your strategy for improving competitiveness among airlines and increasing the number of connections and companies operating in Mozambique?

Mozambique is growing rapidly, and over the past 10 years international arrivals have grown from 400,000 to around 2.3 million. The airports along the coast are all focused on tourism. We are making airports viable. The government is working with Linhas Aéreas de Moçambique on expansion capable of offering connectivity. Additionally, the strategy for Nacala is to get people to come to Mozambique and from here fly elsewhere. One strategy is to offer rebates for airport fees and air navigation fees for shorter, or regional, flights. We are offering flights from Nacala to Pemba and Nacala to Nampula, for example, at a 50% rebate. That is one of the strategies to position the airport. But it could as easily be done somewhere else. For example, we are launching a tender for the concession of the three airports: Inhambane, Ponta do Ouro, and Bilene.