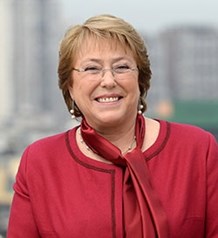 Hubs in a Pod

Michelle Bachelet has been the President of Chile since March 11, 2014. She is now serving her second term, and was President of Chile from 2006 to 2010. She is the first woman to hold this position in the history of her country and the first President to be reelected since 1932. In 1970 she began her studies at the Medical School at the University of Chile. She was also the first Under-Secretary-General and Executive Director of UN Women. She also holds ministerial portfolios in the Chilean Government as Minister of Defense and Minister of Health.

Share on:
"The government of Chile assigns a special priority to strengthening our relations with Latin American countries."

Panama and Chile have a history of strong bilateral relations. What makes Panama an importance economic, security, and political partner for Chile?

Panama is the main logistics hub in Latin America, making it, without a doubt, an important engine for global trade. In this context, Chile is the first Latin American user of the Panama Canal and third overall turning Panama into a key player for the growth and development of Chile’s foreign trade. Since the expansion of the Canal was announced, Chile has closely followed its development, as it represents the possibility to further increase our trade with the rest of the world, particularly regarding gas imports from the US and Trinidad & Tobago, which will be able to circulate through the new locks. In addition, Panama also aspires to become the hub for disaster relief aid throughout the region, an issue of great interest to Chile.

Chile is the first country in South America with which Panama signed an FTA. How did this reinforce trade and investment links between the two countries, and which goods are particularly important?

The economic and trade relations between Chile and Panama are governed by the FTA, in force since March 7, 2008. The FTA establishes a regulatory framework that includes disciplines such as: market access for goods (rules of origin, customs procedures, technical standards, and sanitary and phytosanitary standards), trade in services, investment, transparency and dispute settlement. All these disciplines ensure the best conditions for trade in goods and services between Chile and Panama. Since the entry into force of the FTA, exports have grown at an average annual rate of 4.1%. During 2015, Chile exported to Panama a total of $176 million and imports from Panama in 2015 were $82 million, an increase of 9.3% in relation to 2014. There is an increased presence of Chilean products in the Panamanian market, including salmon (5 fold increase), machinery and metal products and equipment (4 fold), and processed foods and wine, which have doubled their exports. Moreover, there are growth opportunities for trade in services, as 80% of Panama’s economy is linked to this sector. Regarding investment, Panama is the 10th destination, in the world, for direct investment of Chilean capital. The accumulated direct investment in that country amounts to $813 million, representing 0.8% of the total invested abroad and it ranks as the largest recipient in the region of Central America, with over 20 Chilean companies. Chilean investment is mainly concentrated in services, focusing on finance, transportation, retail, computer services, and construction.

Looking ahead, how can the two countries increase their cooperation in other fields such as tourism and education?

The government of Chile assigns a special priority to strengthening our relations with Latin American countries. Since 2014, we have focused on promoting an ambitious agenda in Central American countries based on not only the administration of FTAs, but also on three additional pillars: the modernization of these trade agreements, development cooperation, and investment promotion. In the area of development cooperation, Chile is carrying out some South-South, as well as triangular cooperation projects in the region. In February 2016, we presented a cooperation project entitled “Strengthening the institutions responsible for trade policies of the Central American countries” to the EU. This project aims to contribute to strengthen the Central American region as an economic group and help in their integration with international trade. We hope to continue incorporating similar initiatives in other areas such as education, security, and tourism, among others. In addition, we welcome the interest of Panama in the Pacific Alliance and hope that we will continue to strengthen relations in the area of regional integration, through closer cooperation on areas such as education, tourism, transportation, and promoting SMEs.