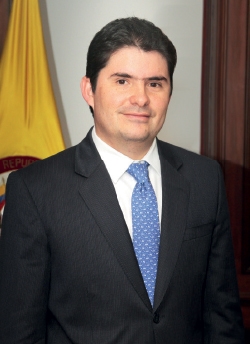 Luis Felipe Henao Cardona was born in Medellí­n in 1979. He has a long history in academia and has written various texts on penal law and justice, as well as serving as a Professor of Disciplinary Law at the University of Medellí­n. In his career as a public servant, he has occupied posts in the ministries of the Interior and Justice. He has been the Director of the National Institute for Penitentiaries (INPEC), and the National Directorate for Narcotics (DNE). After becoming Vice-Minister for Housing in May 2012, he implemented the Free Housing Program.

Share on:
The construction sector grew 10.8% from January to September 2013. How would you assess the development of the sector regarding public infrastructure? We finished 1Q2013 on over 10% growth, with […]

The construction sector grew 10.8% from January to September 2013. How would you assess the development of the sector regarding public infrastructure?

We finished 1Q2013 on over 10% growth, with over 8% in 2Q2013, and a unique 24.8% in 3Q2013. These impressive figures made the construction sector the leading economic engine for the country during this period. By comparison, in 3Q2013, the second fastest sector in the Colombian economy was agriculture with over 6% growth. In this context, housing played a key role. Colombia generated attractive incentives for companies, ramped up investment, constructed over 100,000 free housing units, and employed 1.4 million workers in the sector. Our construction sector is now at the regional forefront, positively reducing unemployment. In fact, Colombia has generated the most employment in the region on a per-capita basis. During Pastrana’s administration, the country built 280,000 housing units, while during Uribe’s first administration it built 340,000, and in his second administration 560,000. With President Santos, we plan to end on 920,000. This represents an 80% increase compared to the previous government. In 2013 alone, we built 260,000 housing units, representing an all-time record for the country. This activity has not only contributed to the development of the construction sector, but to other related sectors, too.

What are the government’s plans regarding free housing?

We have an integral housing strategy reaching all levels of society, especially the low-income segment, where informality is still high and poverty, although reduced, is still a major issue. Our government offers these people real possibilities to access the housing market through the free housing units program. In 2014, we will complete 60,000 housing units for this segment of the population.

How would you assess the work being done to improve access to drinking water?

How well shielded is Colombia from a real estate bubble?

We do not have such a deepening of the mortgage credit sector as, for example, Spain, which suffered from a real estate bubble. Our deepening of the mortgage credit sector stands at 5.1% of GDP, while in Spain it exceeds 50%. Also, Colombia enjoys excellent risk management standards as compared to other countries, and we do not give mortgages to those people who have to allocate more than 30% of their income. In addition, we only concede mortgages between 50% and 70% of the value of the property. We also have to mention that, in Colombia, we only construct housing projects when all the units have been sold. Additionally, Colombia’s credit default level stands at 2% nowadays.

Where would you say lie the best investment opportunities for foreign developers and constructors?

The fact that both Colombian and foreign players compete at the same level is a clear tool that attracts foreign companies to the sector. That has led to a current scenario in which many foreign companies develop construction projects in our country. In fact, I think housing, port, and tourism construction are attractive sectors with great development potential.

What is the level of commitment of the Ministry to further generate employment opportunities in the sector?

In December 2013, we reached the a record level of employment in the sector, at 1.4 million people. If we take into consideration the 21 subsectors that benefited from the growth of the construction sector the figure rise. As investment continues to flow, and as transparency and formality levels continue to increase, so will employment opportunities.