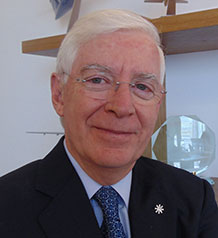 Jose Luis Garza is CEO of Interjet, a position he has held for a decade since the foundation of the airline. He has extensive experience in the sector with a 44-year career in both the public and private sectors, with the office of the Mexican President, Banamex, Infonavit, and Aeromexico. He established Garza Alvarez & Associates in 1991. His education history includes a Master’s in management at LSE and a bachelor’s degree in political science and public administration at the Universidad Iberoamericana in Mexico.

Share on:
"We opened our first service into Guatemala and then followed up with Costa Rica."

Why has Interjet decided to make the transformation to become a fully international airline?

I think it was a totally natural movement. We started flying in December 2005 and by 2008 were already in Mexico City’s international airport. We were able to demonstrate and compete wing to wing with our competition, all well-established carriers. By the end of 2013 we had already consolidated our position in the domestic market of Mexico, we practically covered most of Mexico and we were the second largest Mexican carrier. Since 2011 we have started an intense internationalization and 100% of our growth has been overseas in the past two years. In the case of the US, we could not really expand internationally because we had several limitations. In Mexico-US air transportation there was a bilateral agreement that imposed limitations, allowing only two carriers to transport passengers from Mexico to the US and vice versa. Legally, we struggled against that and lobbied in Washington and Mexico since it was against fair competition. Eventually Mexico agreed upon a temporary solution with the US and began issuing temporary renewable yearly permits, which put us in a difficult position because we could not make major investments in such fragile legal conditions. Fortunately that situation is now over with the open skies agreement. We went first to the US before having more or less the same problem with other Latin American countries. The bilateral agreements that Mexico had with Guatemala, Colombia, Costa Rica, and Peru imposed certain limitations and made it difficult for us to gain entrance. We have not abandoned the Mexican domestic market.

How has the open skies agreement benefited Interjet in terms of flights to the US?

We are now in the US with new bilateral agreements flying to New York, Miami, Orlando Sanford, Houston, Dallas/Fort Worth, San Antonio, Las Vegas, Chicago, and Los Angeles. In the wintertime we will be going to Denver for the Mexican skiers. All across Latin America, Mexico has bilateral agreements with different countries, and we still have to deal with the existing terms of each agreement.

Are you aiming to continue expansion into other countries?

Guatemala was our very first international operation. We opened our first service into Guatemala and then followed up with Costa Rica. We then opened a route to Bogotá in Colombia, which has been successful with two flights a day. We now also fly to Lima in Peru. In the Caribbean, Interjet is the leading Mexican airline covering Cuba and serves Havana, Varadero, and Santa Clara. Once tourism picks up in Cuba, this will be a huge opportunity for us. Canada it has always been a great market until around eight years ago when the Canadian government imposed a visa on Mexican visitors, tremendously limiting the amount of people from both countries. When the visa requirement is lifted on December 1, we will not only expand from Mexico City but from Guadalajara, Cancún, and Monterrey as well. It is an important market with great potential.

What portion of your flights is international and what is Interjet’s strategy to grow in this segment?

Around 35% of our flights are international, but our goal is to reach 50%. When we started we were 100% domestic and thus heavily exposed to every impact of the rate of exchange. Though we are now moving into a more reasonable situation, we are still 50% behind our goal. Therefore, we will see a lot of international growth for Interjet in the future. In Mexico we have a much consolidated presence and leadership through our extensive network of routes, the national market is also very representative and since the economy is growing fast and air transportation is becoming a natural way to travel.

Are you concerned by the increase in low-cost airline competition?

Competition is everything in modern life. Obviously, competing and winning are important, and to win you have to be fit, and competition always brings innovation and new ways of doing things your own way. We provide a service somewhere between business and premium class at the competitive price of economy. We need people to try and test the experience. When they do so and are satisfied, it is very likely they will return to us rather than the competition. We compete against the biggest airlines in the world, and while I am not saying we are winning, we are doing very well.

What is the importance of your airline alliance expansion and what type of global footprint do you want to have?

We do not have the right airplanes to go across the Atlantic, or even south to Argentina, Brazil, or Chile. The furthest destination we can reach is Lima. In the meantime, we can expand through our associates and partners. We are providing what is called domestic distribution for our partners. So far, their customers have been highly satisfied with Interjet. If they arrive in business class, they see no difference. We are providing a distribution service in Mexico and vice versa, sending Mexican people to Spain, Italy, and England. We now have partnerships with eight carriers in Latin America. When we fly to Lima, we leave Mexicans there and let our partners take them to destinations we cannot reach. This also works in reverse when we pick up passengers in Lima and take them to New York or Los Angeles. It is another way of internationalizing whether direct or indirect. American Airlines is our partner in the US, though we are competing with it directly on several routes very important to them, such as Dallas, Miami, and Los Angeles, the most important American hubs for Mexico.

What is your vision for Interjet in Mexico, the Americas and the wider world in the next five years?

When we started our business plan back in 2005, we thought it was aggressive. We had only 17 aircraft and 12% of total market share of Mexico. Today we have 70 aircraft and have leaped to over 20% domestic and 20% international market share. We took the opportunities the industry allowed us to, though for others we forced the issue and created our own dynamic. We are now the beneficiaries of those dynamics. What the next few years will bring, is hard to tell. No doubt Mexico—US air traffic will grow considerably, so we will continue to play a key role there in the US, and our market in Latin America will continue to grow. We will have to decide what to do in the upper and lower areas because we can expand into long-haul routes with bigger airplanes and go transcontinental. This is a big leap that I do not think we are yet prepared for. That said, 10 years ago we were not prepared to be where we are now. We have to keep an open mind and open attitude towards business and if we decide to take such a jump it will come with a lot of challenges and difficulties. Then there is of course our focus on Mexico, which has great potential for growth.