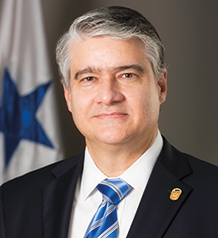 A graduate of Florida State University with a degree in business administration (1984), Dulcidio de la Guardia holds an MBA from Loyola University (1986), New Orleans, and received his Charter Financial Analyst (CFA) from the CFA Institute Charlottesville, Virginia, in December 2000. In 1990, he joined the Panama Stock Exchange as Development Manager. In July 2002, he joined Primer Banco del Istmo (Banistmo), as Vice President of Investment Banking responsible for corporate finance, M&A, fiduciary services, and brokerage operations. In 2005 he was promoted to Executive Vice President and Head of the regional banking unit. In 2006, he oversaw the merger of HSBC (Panama) and Banistmo banks and was appointed Director of Corporate Banking and Markets. In September 2007, he was appointed Director of the Private Bank. On July 1, 2009, he was appointed Deputy Minister of Finance of Panama.

Share on:
What were the main factors that allowed the government to reduce its fiscal debt in 2015? The fiscal deficit of the non-financial public sector (NFPS) in 2015 was 2% of […]

What were the main factors that allowed the government to reduce its fiscal debt in 2015?

The fiscal deficit of the non-financial public sector (NFPS) in 2015 was 2% of GDP, while in 2014 it was 3.4%. In this reduction we can highlight four main factors. Total revenues grew by 3.9% while total expenses increased at a slower rate of just 2.5%. Capital expenditures represented 7.1% of GDP in 2015, and approximately 58% of public investment was financed via current savings. These figures all show how Panama has continued to progress in its fiscal consolidation. There is a combination of specific elements that led to an improved fiscal situation in 2015, specifically the prudent budget management of public spending together with the continued strengthening of the General Directorate of Income to continue achieving greater efficiency in its tax collection, which in 2015 exceeded the figures recorded in 2014 by approximately PAB47 million. Moody’s, Standard & Poor’s, and Fitch Ratings, the three major worldwide rating agencies, reiterated Panama’s investment grade in 2015 with a stable outlook, highlighting macroeconomic and macro-tax prudence, moderate levels of public debt, and the positive outlook for economic performance in the years to come. By the close of 2015, we met the limit deficit required by the Fiscal Responsibility Law. The government defined a five-year investment plan of about $20 billion as part of its strategic plan, 64% of which is allocated to social investments. Thus, the major targets of the 2016 budget are focused on social matters such as education, basic sanitation, health, and transport, which together frame the social policy of this administration.

What are some of the most important reforms needed to increase transparency in the banking sector?

From January 2016, new rules limiting the use of bearer shares of Panamanian corporations came into force. With these new rules, companies that have issued bearer shares must give them to the custody of agents who are authorized and regulated by financial authorities. In compliance with the commitments to the Financial Action Task Force (FATF), we passed Law 23 of April 27, 2015, which represented an important step to strengthening our financial and non-financial system against money laundering and terrorist financing, in compliance with the roadmap prepared by the Money Laundering Commission in order to take our nation off of the FATF’s “grey list.“ Other new measures to prevent money laundering include increased due diligence procedures, a risk-based approach to identify, assess, monitor, manage, and mitigate the risks associated with money laundering, extended proceedings when there are unusual transactions or when there are doubts regarding the veracity and accuracy of customer identification data, and reports of cash transactions. In addition, as part of the implementation of monitoring and combating illicit activities, we have passed seven new laws that include new offenses and regulation of non-financial sectors and the incorporation of the Administration of Supervision and Regulation of Non-Financial Subjects, which is in full operation. In addition, Panama will join the list of OECD countries to automatically exchange tax information in 2018 and has accepted the automatic exchange of information on a bilateral basis.