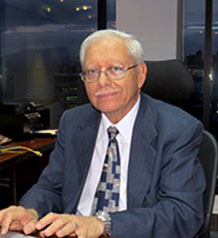 Helio Fallas Venegas holds a bachelor’s degree in economics from the University of Costa Rica and a master’s degree in economics from Universidad de los Andes. In addition to being First Vice-President of the Republic and Minister of Finance from May 8, 2014 until today, he has also served as Minister of Housing and Human Settlements (2002-2005) and Minister of National Planning and Economic Policy (1990-1991). He has also worked as a specialist in analysis and follow-up of projects at the Directorate of External Financing of the Inter-American Institute for Cooperation on Agriculture (IICA) from August 1982-February 1986.

Share on:
"We inherited a regulatory framework with outdated laws for both income and VAT taxes."

How is the Ministry reducing the country’s fiscal deficit, which rose by 3.9% of GDP in the first ten months of 2016?

When we took office we did an in-depth analysis of the main financial indicators and policies that had been implemented up to that point. An example of this is that between 2008 and 2010 there was a considerable increase in public wages, but no new resources were created to finance this expenditure. We inherited a regulatory framework with outdated laws for both income and VAT taxes, which is why there have been certain elements of our work that we have not been able to fully control so far. The technological apparatus inherited was old-fashioned. In fact, there were some things that were actually monitored and calculated with an excel spreadsheet, for example. This led us to start thinking of reform. We took the decision to start preparing several projects to meet the needs to tackle the above-mentioned situations. Now, we have focused on income, expenses, and new technologies to improve tax collection. Parallel to the reform we have implemented several new laws. In terms of expenses, for example, we passed new laws on pensions that are funded by the national budget. Within the focus on expenses, the Caja íšnica concept is a mechanism through which certain resources get transferred from a ministry to its decentralized agencies. These entities have accumulated balances over the years, known as “single-box balances,” but recently we passed a law that writes off those liabilities after two years. In terms of income priorities we have approved a draft law to tackle smuggling, while two others are about to be approved to deal with fiscal fraud and legal persons. In this context we have five more draft law projects lined up, namely VAT, income tax, public employment, exonerations, and fiscal regulation.

How do you assess the commitment made by the government to spend less and raise more revenue without increasing taxes?

We have put a lot of effort into collecting more and spending less. For example, we have implemented digital tools for people to pay taxes directly on the ministry’s website. That change contributed to increasing the overall volume of tax returns to 18% more than expected. We also created more synergies within the ministry’s main areas of work in order to increase the level of tax intelligence. For example, we have increased the number of taxpayer profiles (large corporations and other companies) in our database. In Costa Rica we have a register of 490 large taxpayers. The idea is to better understand the behavior of companies and improve the tax collection efforts of the government. Our activity has been directed at increasing tax collection and avoiding fraud. We have seen that income tax has increased by 15% in the last two years, which is the result of our action and efforts. This has also contributed to stopping a trend we observed when we arrived in office; year after year, expenses were growing much faster than income. This is something we have documented.

What is the current level of primary deficit?

We calculate both the primary deficit and the financial deficit (the same, but including interest). In both 2014 and 2015, these deficits increased. However, in 2016 (data to October) we managed to reduce them. In 2016, the primary deficit was CRC519 billion, whereas in 2015 it was CRC702 billion. We are talking about a reduction of CRC180 billion. Now we are at a similar level as to that of 2013. Total income grew in 2016 by almost 9% and income on utilities is up by 14.5%. In this context, total expenses have only increased by 3.6%. This is key to reducing the primary deficit. Regarding the financial deficit, this stands in 2016 at CRC1.2 billion, whereas in 2015 it was CRC1.35 billion. The primary deficit represents 1.7% of the country’s GDP, but in 2015 this figure reached 2.4%. The fiscal deficit today represents 3.9% of the GDP, whereas last year the percentage stood at 4.7%. This is a clear sign of the financial improvement we brought thanks to the implementation of new technologies, better collection of taxes, and other such measures.

What is the attraction of Costa Rica’s finance sector for foreign investors?

We are mainly focused on the country’s financial activity. As a ministry, we leave the effort to attract foreign investment to other ministries and public organizations. Having said that, we can say that Costa Rica is an attractive investment destination. We have been reducing interest rates, have a stable exchange rate, legal and regulatory stability, and are making continuous efforts to guarantee an ideal investment atmosphere. We are also increasing our available resources and have an effective treasury. We offer great macroeconomic and microeconomic stability. On top of all that, there are no limitations for companies who want to access credit. However, the most important thing here is having a skilled and talented human workforce available.

What are your key priorities for the rest of your administration?

We want to continue implementing the same types of policies and actions we have done for the last couple of years: e-taxation and the implementation of new technologies in most of our processes. We understand that nowadays you cannot move forward without the implementation of new technologies. We also need to consolidate the tax reform with projects that are still pending approval. As 2017 will be a pre-election year, that means time is running out to do everything we need to. Overall, we are satisfied with the work done up until this moment, for the development of the country from the moment we took over has been palpable. At the same time, we believe there is still a lot we can do and will work toward that end.