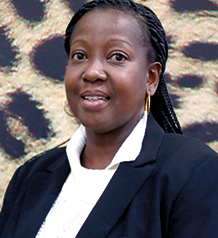 in search of Africa’s soul

Now the managing director, Devota K. Mdachi got her start with the Tanzania Tourist Board back in 1994 as a Tourist Information Officer, rising to Senior Tourist Information Officer in 2000 and Head of the Tourist Information Center in 2004 in Dar es Salaam in 2004. In 2011, she worked in the marketing and communications department of the Regional Tourism Organization of Southern Africa. Upon her return to Tanzania, she became Director of Marketing before being confirmed as the first female Managing Director in the history of the Tanzania Tourism Board. She graduated with a BA in international relations and advanced french language from the University of Dar es Salaam.

Share on:
TBY talks to Devota K. Mdachi, Managing Director of the Tanzania Tourist Board (TTB), on marketing the soul of Africa, investment opportunities, and boosting Tanzanian infrastructure.

Could you tell us about your new slogan and what strategies you are using to promote Tanzania as a global destination?

The slogan has been changing in the past decade, from “Tanzania, unsurpassed Africa!” to “Authentic Africa” and “Tanzania, The Land of Kilimanjaro, Zanzibar, and the Serengeti.” This worked very well for us because we were naming our three national icons. In 2015 we decided to change the slogan to show the world exactly what Tanzania was about. When we refer to a soul, it means life; something that lives on, that gives life to a body and is endless or believed to live forever. Home to the highest mountain in Africa, Mt. Kilimanjaro; the Ngorongoro Crater, the Eden of Africa, and the eighth wonder of the world; Lake Victoria, the source of the Nile; Selous, the largest game reserve in Africa; Lake Tanganyika, the deepest and longest lake in Africa; and the fact that the remains of the world’s oldest living man were found here makes “The Soul of Africa” the most fitting refrain.

How are you cooperating with the private sector to reach the minister’s stated goal of 3 million tourists by 2018?

Together with the private sector, we developed an international marketing strategy in 2012 to set goals, decide how to reach them, and determine which particular markets we should concentrate our efforts upon. The primary markets we selected were the US, the UK, Germany, and Italy, and the secondary markets were Canada, France, Australia, the Netherlands, and Spain. That said, we are also very interested in the BRICS, the UAE, and of course Africa as a region. We are also trying to diversify our tourism offerings, such as holding more conferences, and have developed state-of-the-art conference facilities in Dar es Salaam in order to attract more MICE tourism. Our new National Stadium in Dar es Salaam also draws hundreds of sports events to Tanzania, and key international marathons such as Kilimanjaro, Ngorongoro, and Rock City attract athletics from all over the world. For cultural events we have the film festival in Zanzibar (ZIFF) as well as a cultural festivals such as Sauti Za Busara and Haydom, to mention a few. In addition, we recently launched the Swahili International Tourism Expo, Tanzania’s leading tourism event, which features a comprehensive hosted buyer program and attracts hundreds of exhibitors and trade visitors. All of these events draw thousands of tourists to Tanzania. Cultural tourism is also a popular trend, as tourists want to experience local life and participate in daily economic activities.

What opportunities do you see for private investors, local or foreign, in the tourism sector?

Right now, there are many opportunities, for both local and foreign investors. These include investments in accommodation facilities such as lodges and hotels and entertainment facilities such as marine parks, conventional centers, casinos, recreational facilities, sports facilities, transport, restaurants, and casinos.

What are the challenges preventing this sector from faster and bigger growth?

There are many challenges, starting with local regional competition. Kenya and South Africa, which have similar products, are prime examples. Another challenge is our existing infrastructure and the fact that some areas of the country are not easily accessible during the rainy season. In addition to the question of connectivity, there is also the political instability and security issues of the East African region, not to mention the quality of service delivery.

Do you have any specific goals or expectations for 2017?

Our target for the next three years is to reach 2 million visitors. With the completion of the new airport terminal, more international airlines will start coming to Tanzania, meaning more passengers and more tourists. The government is making efforts to open up the southern circuit. By doing so, we will get more tourists interested in visiting that part of the country.