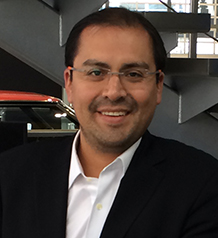 In The Right Direction

Born in Mexico City, Miguel Barbeyto has a degree in marketing from ITESM and attended the management program at IPADE. In 2005, he joined the team as Marketing Manager when the brand came to Mexico. In 2009, he was appointed Director of Marketing, Product, and Public Relations, a position he held until October 2014. He was recently appointed Senior Director of Mazda in Mexico.

Share on:
TBY talks to Miguel Barbeyto, Senior Director of Mazda, on driving the industry forward in service delivery and reducing emissions.

The first reason is the products we are offering. At the beginning of 2015, we introduced the Mazda6 and the Mazda CX-5, and that helped us increase our pull in those segments. In March, we introduced the completely new Mazda2, which is produced at Mazda’s new assembly plant in Salamanca. With the previous generation we sold 150 units of the Mazda2, and with the new generation we sell around 600 units per month. In September, we introduced a new MX-5, the Roadster. With the old generation, we sold around 15 cars per month and with the new generation we are selling around 100. In December, we also launched the new CX-3, which is a small SUV that generated an increase in volume. The increase is firstly because of the introduction of new models and the second factor is that brand positioning in the country is aspirational, and customers love and want to buy a Mazda because of the design and the technology that we have. In 2015, our repurchase ratio was 47%, which is high. We are the third non-premium brand with the highest repurchase rate in the country. That is thanks to the quality of the service that we give our customers, as well as the car and many other things that we provide.

What is the significance of Mexico to Mazda globally?

We follow the Japanese fiscal year from April to March. In the 2015/2016 fiscal year ending in March, we hope to be in sixth place in Mazda globally. At this time one year ago, we were in eighth place. Our Japanese bosses pay a great deal of attention to our operations here, because Mexico now has much more relevance in Mazda’s global operations, and we, of course, also have the Salamanca assembly plant, which is important for the company.

Did you reach last year’s target of producing 230,000 units at the Salamanca plant?

Our final production total from 2015 met our target. Capacity at the plant is 250,000 units, and this fiscal year we will reach 230,000 units. We are taking care with the quality of the product because it is the most important part of the business, which means producing good quality cars that will help us in the long term. Mazda cars are well received in markets around the world, including Central and South America, the US, Canada, and, of course, the domestic market in Mexico.

What is the role that Mazda plays in the community in Salamanca?

The Salamanca plant currently employs 5,200 people. Experts say that for every employee there are three or four indirect employees; therefore, our real impact on employment is more than 20,000 people. The best way to measure this is to look back about five years ago before the Salamanca plant when there was nothing there. Today, the city is full of hotels, restaurants, schools, and hospitals; the community has been developing with the plant.

Mexico is currently experiencing an air pollution issue. What role do you see the automotive industry playing in dealing with that problem?

That is an important question. In 2013 and 2014, Mexico established a new rule on reaching certain standards of emissions to reduce pollution and all manufacturers are now working toward this goal. In 2013, Mazda introduced the new SKYACTIV technology, which has had a positive effect on reducing emissions. The engines that we offer in Mazda cars today are efficient in cutting pollution and have greater fuel efficiency. In Mexico, we have an old stock of cars that are six or seven years old and emit pollution. The aging infrastructure, such as public buses, also contributes to the pollution problem, and that is the issue today, not the new cars that are being produced. The industry is working with new technologies, but the problem is with the older stock of vehicles in the country.