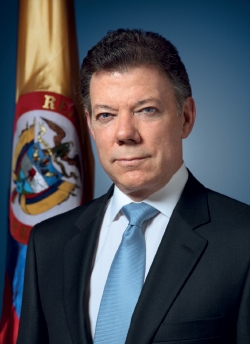 Juan Manuel Santos Calderón graduated from the Naval School of Cartagena in 1969 and continued in the Colombian Navy, obtaining a BA and finishing as a Naval Cadet. After leaving the Navy, he attended the University of Kansas, graduating in 1973 with a BA in Economics and Business Administration and went on to receive an MSc in Economic Development from the London School of Economics and another in Law and Diplomacy from the Fletcher School of Law and Diplomacy from Tufts University. He has worked as Chief Executive of the Colombian Coffee Delegation to the International Coffee Organization and Sub-Director of El Tiempo. Under President César Gaviria he acted as Minister of Foreign Trade. In 2006 he became Minister of Defense, before being elected President in June 2010, and re-elected for a second term in 2014.

Share on:
The Congress of the Republic and the government I have the honor to preside over can show a positive balance to the nation because, since 2010, we have achieved changes […]

The Congress of the Republic and the government I have the honor to preside over can show a positive balance to the nation because, since 2010, we have achieved changes and reforms that have transformed and will continue to transform the lives of our countrymen for the better. The laws and constitutional amendments that were approved during this time are building a new Colombia, one that moves toward peace with social prosperity and that sets ambitious goals such as being the most educated nation in the region and bringing about the complete eradication of extreme poverty.

In developing a doctrine in which I have believed for a long time, the ‘Third Way,’ we have proven that major changes are best achieved with thoughtful and well-implemented reforms rather than with revolutions or arbitrary acts of power. We passed more than 300 laws and constitutional reforms, projects that many said were impossible to bring about, and which now stand out not only for their quantity, but also for their quality. These acts of legislation include royalty distribution reform, the law on land use planning, and the law on victims and land restitution. This legislative work has enabled our economy to become strong and dynamic, recognized and praised all over the world. It has also generated the resources necessary to advance an inclusive social policy. They are progressive laws, which have given Colombians more guarantees regarding respect for their rights, as well as giving global investors the confidence to plant the seeds of progress in our soil. I am sure that we will achieve as good or even better results with the new Congress, continuing to work toward what is best for our country.

Amidst this positive outlook, there are still many challenges we must address. We have created unprecedented levels of employment, with two and a half million jobs, most of them formal, but there are still a similar number of unemployed people. We have lifted millions of Colombians out of poverty and started to reduce inequality for the first time; however, one in 10 Colombians still lives below the poverty line. And, above all, our biggest challenge, a challenge that is possible to overcome, is to end the armed conflict that has bled us for over half a century, and build a lasting peace. Congress played a key role in preparing the path to achieve this, with legislation benefiting victims, and reforms that have established the applicability of transitional justice. The new Congress will have in its hands the enormous responsibility of supporting the implementation of the agreements and to legislate for a new, post-conflict nation.

Colombia is changing. It is leaving the burdens of war and hatred behind. When the time comes, the task this Congress will have at hand will be to pass the statutory law developing the legal framework for peace. The idea is not to sacrifice justice to achieve peace. The idea is to achieve peace while ensuring the maximum justice—a justice that respects the rights of victims. And then we will have our great task as a nation: the post-conflict era, which we shall assume from the perspective of reconciliation and opportunities.

What we want is that all Colombians may access the circle of opportunities and start generating income and improving the situation of their families. We want is for the regions to continue empowering themselves, and for the most remote areas of the country to become incorporated into the process of national development. Peace will generate greater trust and investment. It will attract tourism, and will allow us to allocate more resources to what Colombia needs the most: education, health, housing, public services, agricultural development, technology, entrepreneurship, and innovation. If the Colombian economy was the fastest growing economy in Latin America during the first quarter this year, second only to China in the whole world, just imagine our potential without the conflict. Peace must come hand in hand with social prosperity.

Social gaps in our country are still very large, and therefore public spending should be focused and targeted toward correcting inequality and increasing opportunities. More victims should be compensated and farmers should be able to recover the land that was forcefully taken from them. We need to provide more housing for the poorest and more basic services for those who do not have them. We need to connect all municipalities to broadband internet, and to develop the most ambitious highway program yet, which will create jobs and prosperity.

We must turn our energy and efforts to the countryside so we can compensate for 50 or more years of neglect and backwardness. The Rural Mission and the Great Agrarian Pact “A Countryside for Everyone” are underway, and we are meeting our commitments with farm laborers and agricultural producers. This Congress will have three bills in store that will complete the task. The first one is the Rural Development Act, which adopts a territorial approach to rural development, and requires that policies and investment decisions are made in each locality, giving priority to the most vulnerable. The second bill is the Barren Land and High Plains Development Act.

Today the world is demanding more food than ever before and the FAO has identified Colombia as one of the seven countries with the greatest agricultural potential on the planet. That is why we have to provide clear rules and legal security to those who want to invest in the high plains, a region with an enormous potential where the agricultural industry and the rural peasant economy can coexist in harmony and mutually benefit each other. There will be a third bill to formalize rural land ownership, to help farmers to register their land with legal security and stop land dispossession.

In the field of education, we have taken important steps in the early childhood program, with free education in public schools through the “Everybody Learn” program; increased slots and resources in higher education; and the great challenge of further improving the quality of education, including the promotion of excellence in teaching and the gradual implementation of the single school day. That is our challenge if we are to reach the standards of other countries that have grown because they have focused their efforts in the formation of children and youth. We are aware of this and that is why, in 2015, the education budget will, for the first time ever, be the highest among all sectors, including defense.

With regard to health, I would like to start by thanking Congress for approving the statutory health law, which establishes health as a fundamental right and is the first statute of a social right in the 23 years of our Constitution. We need to finally overcome the effects of the financial crisis, which involves the payment of debts with hospitals and the definition of conditions of financial empowerment and stricter oversight for the EPS (Health Promotion Entities). Finally, we have to continue improving the quality and timeliness of health services. We have already achieved universal coverage. Benefit plans have been leveled. We have included hundreds of drugs and treatments in the benefits plan, and drug prices are under control. Our commitment must now focus on quality and prevention.

Our government has maintained the offensive against illegal armed groups, criminal gangs, and common crime. Proof of this is that not only did the top two leaders of the FARC fall in combat, but more than 50 heads of fronts or columns were also neutralized. Crime rates such as murder and kidnapping are at the lowest levels in more than three decades, all thanks to our Military Forces and the National Police. We will continue to strengthen and modernize our law enforcement, and will continue working for their legal security, their well being and that of their families. We will increase their number by another 25,000 police officers, since in the first term of this government we increased their number by a similar number to ensure public safety, which remains an absolute priority. Furthermore, we will submit the new Police Code to the consideration of Congress, with exemplary corrective measures and more clout for the authorities to fulfill their task.

Environmental issues will also play a key role in our new term in office. We declared the Estrella Fluvial de Iní­rida (Iní­rida River Star) as an area of international importance; we doubled the size of the Chiribiquete National Park; we promoted the law that puts an end to the use of mercury in mining and industry; and we presented to the world a successful proposal to meet Sustainable Development Goals. We need to urgently improve the regional management of our environment and therefore we will bring a reform to Congress we have been judiciously preparing, for the CAR (Regional Autonomous Corporations) and the National Environmental System. We will also introduce legislation to protect Moors, which are special water sources in our country.

Colombia is now breathing new air. We are confident in our capacities and in our future. The world is looking at us with admiration and expectation, and every day we can travel to more countries without the burdensome requirement of visas. The possibility of a new Colombia is in our hands: a Colombia that can join in the cheerful game play of our national football team and instill pride and unity among its citizens. Hopefully, in four years time, we will deliver to our successors and to the next generation a country of which we can all feel proud. A country of opportunities, a country of peace.