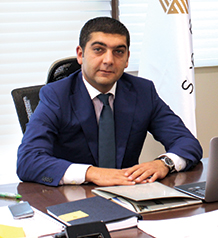 Chairman of the Executive Board, Synergy Group

Share on:
TBY talks to Dayanat Guliyev, Chairman of the Executive Board of Synergy Group, on the recent restructuring of the company, its goals and priorities, and industrial zones.

Synergy Group was established in 2010 and is one of fastest growing investment holding groups in Azerbaijan with a portfolio of 28 companies. Within a short period of time, we have provided employment to over 1,500 people, not to mention our suppliers and key stakeholders benefiting from cooperation with Synergy Group. Our portfolio mainly covers businesses such as construction and construction related-products and manufacturing, ICT, agriculture, and hospitality management. We actively encourage young and talented people to join our team, because we believe that our people are the core of our success. Therefore, all key top and mid-level managers are involved in the restructuring process. Furthermore, we have been closely collaborating with PwC, which has brought its international experts to assist our team. The purpose of restructuring is twofold. First, we are keen to finalize our long-term investment strategy. Second, we aim to improve further operational efficiency of our subsidiary companies. Such an approach comprises a few consistent steps that are of great importance in most restructuring cases. As a first step, the top management defined the goals and expectations of shareholders on the group’s long-term development. We then carried out a thorough analysis of our portfolio businesses, including their key financial indicators, corporate governance system, organizational structure and further business development opportunities. The final step is the identification of the main investment opportunities and the development of investment strategy, which is underway. The stages of business diagnosis mentioned above may go in parallel and save time for shareholders and top management. We do hope that the successful completion of restructuring will pave the way for further growth of Synergy Group in terms of financial capital and revenues, which in turn means more employment opportunities for people and increased revenues for the state budget.

What are the key priorities of Synergy Group, and how will the new investment strategy influence Group’s CSR policy?

The constant improvement of our businesses’ operational efficiency, quality of human resources and financial capital, as well as the search for additional investment opportunities in Azerbaijani economy are amongst our top priorities. Synergy Group remains committed to its current CSR policy aimed at supporting education and sport. It is committed to the “For a Sustainable Future” slogan. We believe that investment in education and sport is the best investment we can make for the future development of Azerbaijan. Since the establishment in 2010, our Group has developed a solid CSR policy and implemented various social projects in Azerbaijan and abroad. Education is one of the priorities of our CSR policy. By supporting Azerbaijan University, we contribute for the intellectual development of young people. Synergy Group is also a main sponsor of the popular TV Project “Parlag Zeka,” which provides opportunities to talented young people to pursue their education abroad. We have also promoted sport activities by supporting the international cycling tournament Tour d’Azerbaijan since 2013. At the same time, Synergy Group is a general sponsor of the first professional cycling team Synergy Baku Cycling Project. Furthermore, in 2014 and 2015 Synergy Group organized an international chess tournament in Shamkir dedicated to the memory of national grand master Vugar Gashimov, which gathered together top grand masters, including current World Champion Magnus Carlsen. The work and success of Shamkir Chess 2015 was even larger. We have enlarged our audience on the European, Asian, and American continents; thus, brought Azerbaijan to the core attention of the world’s chess community and provided further opportunities for the development of chess in our country. Our activities in social spheres are also highly assessed by our counterparts. Synergy Group has recently received AMCHAM CSR Excellence Award for its contribution to the development of regions in Azerbaijan.

The Year of Industry was in 2014, and industry plays a major role in Synergy Group’s strategy. What are the major progress and achievements?

HE Ilham Aliyev declared 2014 the Year of Industry. Therefore, in 2014, Synergy Group carried out further investments into this sector, especially the production of construction materials. Azerbaijan Fibro Cement (AFC) is a green field investment of Synergy Group. AFC will bring new European standards to the construction sector. Fiber cement is a robust, environmentally friendly material, which took its beginning in the banning of asbestos materials in Europe in 1980s. The project will produce fiber cement flat and corrugated sheets. Flat sheets have excellent technical properties. It is ideal to be used as façade cladding material, since fiber cement flat sheets are graded Class A in regard to fire, moisture, and frost resistance. Corrugated sheets, or roof sheets, are an ideal substitution to asbestos roofing panels. While, asbestos is proven to be carcinogenic, fiber cement roof panels are totally free from any harm, thanks to natural ingredients. AFC will be equipped with state-of-the-art technology and is unique. In early 2015, we made a decision to build the factory in Sumgait Chemical Industrial Park (SCIP). This is long-term strategic decision, which will lead AFC to produce competitive products and serve the region’s markets as well. Here, we have to underline the government’s accurate economical vision to support non-oil sector, because industrial zones such as Sumgait CIP is one of the most successful economical models in Azerbaijan. In addition, in 2014, Synergy Group launched the modernization of Zayam Technologies Park (ZTP), which is based in Shamkir and is already equipped with cutting-end technologies. The development plan of ZTP has been divided into three phases. The first phase has already been completed and it comprises manufacturing of modern greenhouse structures and systems. Our goal is to contribute to increasing the productiveness and profitability of greenhouses. The second phase is in construction and will be completed by the end of 2015. We will be able to produce soil tillage, seed drills, fertilizer spreaders, boilers, and high-pressure receiver tanks. ZTP is aiming to be a regional leader in design and manufacturing of agricultural equipment. The final phase is production of different types of heavy steel structures for civil and industrial projects, which we expect to finalize by the 1Q2016. Manufacturing capacity ZTP will be enough to provide high-quality products to Azerbaijani market, as well as export to the neighboring countries.

Agriculture has exciting potential in the development of Azerbaijan’s non-oil sector and it has been decided that 2015 will be the Year of Agriculture. What role will Synergy Group, with its companies Caspian Coast and Azagro, play in supporting this government initiative?

In agro business, Azagro is cultivating the finest ranges of Dutch roses. Located in Shamkir city, Azagro greenhouse complex is the largest enterprise combining cutting edge technology in soil free conditions, fully automated, and run under computerized control. This technology and know-how enables us to cultivate fresh cut roses in all seasons. Currently, the portfolio is composed of 13 types of roses, in which 10 of them are widely distributed in the market and other three are in the testing phase. Distribution in the Azerbaijani market is carried out through the SBuket brand name. In 2010, we modernized the existing facilities of Caspian Coast Winery and Vineyards based in Siyazan. This technology enables the meeting of worldwide standards for assurance of high quality products. We started planting grapes in 2011 and assortments were selected based on the needs of the market and the local climate, indigenous and European technical grades. I am delighted to note that in 2013, we reaped the first harvest from our vineyards. Known for its finest and most authentic Azerbaijani wine brands, currently we produce more than 20 wine products. Furthermore, the previous year we were successful in launching three cognac varieties. We can proudly say that Synergy Group agro business products are recognized positively in Azerbaijan and in neighboring markets.

Synergy Group is relatively new in Azerbaijan’s business environment. What is your expectation from 2015, the fifth anniversary of the Group?

Despite being a new investment holding, we have achieved positive business records. Currently, Synergy Group is composed of 28 companies operating in various sectors of the economy. While celebrating our fifth Anniversary, we aim to finalize many ongoing business projects, as well as look for new opportunities in channeling further investments. Our country is full of potential with business development, and we will be able to receive the fruits of our strategy. Thus, the current situation will enable us to bring more financial returns and support governmental programs for the diversification of economy.