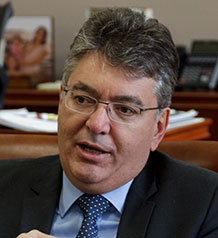 Mauricio Cárdenas has been the Minister of Finance and Public Credit since September 2012, having served as the Minister of Mines and Energy in the Santos administration prior. Between 2008 and 2011, he was the Director of the Latin American Initiative of the Brookings Institution in the US. He earned his master’s and PhD degrees in economics from Universidad del los Andes, in Bogotá, Colombia, and from the University of California at Berkeley, respectively. He has held numerous teaching positions, and published many books and academic articles on subjects related to the Colombian economy.

Share on:
"Colombia has not interfered in the foreign exchange market and that led to a devaluation of the Colombian peso against a stronger dollar."

The country’s budget for 2016 curtails public investment in sectors such as mining and energy. How do you expect the new budget to affect the economic situation?

Colombia is in transition; oil played an important role and it represented 20% of the government’s income in 2013. In 2016, the oil industry will only represent around 2%. We have implemented a tax reform that increased the tax contribution from companies; we also cut public investment; and finally, we had a slightly higher fiscal deficit. This represents a strong response to the drop in oil prices. The budget for 2016 has seen cuts in several areas, compared to that of 2015. We have tightened our belts, accounting for around 1% of GDP without impacting social and infrastructure expenditure. We refer to these policies as intelligent austerity. This means a cut in the budget, but having clear priorities such as continuing to reducing poverty levels and maintaining growth rates; in 2015 we had a growth above 3% and we expect to continue at this level in 2016.

In 2014, Colombia implemented a tax reform that raised taxes for companies. We have recently organized a commission of independent experts to comprehensively revise the tax system in the country. The objective is to make to system more equitable and more competitive. The commission recently finished its report and we expect that by March 2016 we will be implementing a tax reform in the country. One of the key ideas behind this reform is to reduce the tax burden on companies to a manageable level.

How do you expect FDI and exports to develop in the next year?

One of the mechanisms we had in place to accommodate the fall in oil prices has been the flexible exchange rate. Colombia has not interfered in the foreign exchange market and that led to a devaluation of the Colombian peso against a stronger dollar. This enables us to develop our agribusiness, tourism, and other such sectors; the higher the exchange rate, the more competitive our exports are. This situation varies from that of dollarized economies or economies that are strongly dependent on the dollar. Other positive aspects of devaluation will bring results over the longer term, and this is due to the fact companies’ investments take time to demonstrate results. All in all, this devaluation and low oil prices will help Colombia diversify its economy. Also, our exports are more competitive.

What is your overall assessment of your term in office?

Colombia is one of the fastest-growing economies in Latin America in 2015 and this is thanks to the programs we implement to boost economic activity. This is a major achievement within a year in which oil prices dropped—we need to keep in mind that 50% of our exports come from the oil industry. This has been made possible thanks to trust and focused social expenditure. We implemented a couple of programs to prioritize social investment and expenditure and these have paid off.

What joint strategies should Pacific Alliance countries implement to boost economic growth in the region?

We are transitioning from one phase to another in the Pacific Alliance; we achieved commercial integration and now we are working on financial integration. We have implemented free trade agreements and agreements to encourage the flow of services between the countries, and now we want to achieve a higher integration of the financial markets. In this context, we have taken steps to achieve a higher integration of our stock exchange markets. We also want to boost investment and travelling of investors among these economies.

What goals does the ministry aim to achieve by the end of President Santos’ term in 2018?

We would like to see a very solid economy with strong growth rates and a long-term vision. I would like to see a more diversified economy, a Colombia being part of the OECD, and of course a country in which extreme poverty stands below 5%. Also, I hope to leave a country in which the bond credit rating is BBB+. Finally, we need to achieve peace, because with peace Colombia will boost growth by 1% to 1.5% more.