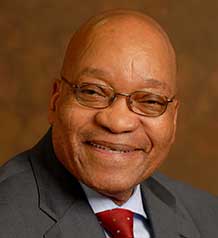 Influenced by a trade unionist family member, Jacob Zuma became involved in politics at an early age, joining the ANC in 1958. He became an active member of the ANC’s armed wing, Umkhonto we Sizwe, in 1962, following the banning of the ANC in 1960. While on his way out of the country in 1963, he was arrested and sentenced to 10 years’ imprisonment. He left South Africa in December 1975 and for the next 12 years was based in Southern Africa. Following the legalization of the ANC in February 1990, he was one of the first ANC leaders to return to South Africa to begin the process of negotiations with the then apartheid regime. In 1991, at the first ANC conference held in South Africa since 1959, he was elected Deputy Secretary General. He was elected ANC Deputy President in December 1997, and served as Deputy President of South Africa from 1999 until June 2005. Zuma was elected ANC President in December 2007, becoming the ANC’s candidate for South African president in the 2009 elections.

Share on:
"South Africa's imports from Nigeria are comprised of mainly oil and gas."

In the last 10 years, bilateral trade between Nigeria and South Africa has strengthened enormously, providing an example of the developing force of inter-African partnerships. What initiatives have driven this growth over the last few years?

South Africa regards Nigeria as one of its most important partners on the African continent in pursuing the vision of Africa’s renewal. In this regard, South Africa views its relationship with Nigeria as an enduring strategic partnership, centered on the advancement of the African agenda. In 1999, South Africa and Nigeria established a structured bilateral mechanism, the Bi-National Commission (BNC). At its inception the primary objective of the partnership was to anchor and strengthen the existing bilateral, historical, political, economic, and social relations between the two countries, which would invariably also benefit other countries on the continent. The BNC further serves to promote trade and investment. The two countries have since signed more than 34 bilateral agreements and MoUs, which are coordinated through the BNC and, in turn, are led by the respective deputy and vice presidents of both countries. With its large population and vast natural resources, especially oil and gas, Nigeria is South Africa’s key trading partner on the continent providing significant opportunities for its exports and investments. There are over 100 South African companies doing business in Nigeria in various sectors, mainly telecommunications, banking, retail, property, entertainment, and hospitality. Nigeria is one of the few countries that enjoy a positive trade balance with South Africa.

Having reliable and strong leaders on the continent is key to sustainable growth. How does South Africa intend to support good governance in Nigeria?

The holding of peaceful elections and the transitional handing-over of power from one leader to another is what South Africa will continue to encourage and support in Nigeria and in Africa in general. South Africa remains steadfast in its opposition to unconstitutional changes of government on the continent and promotes adherence to African Union norms and instruments aimed at strengthening good governance and democracy on the continent, such as the African Charter on Democracy, Elections, and Governance. These are essential measures toward the realization of sustainable peace. It is important that we create an enabling environment for peace to thrive by supporting economic development on the continent. The two countries have an established bilateral mechanism through which all pertinent socio-economic issues affecting both countries are addressed.

How can African nations work together to develop a policy response to the new status quo, particularly in terms of regional economic integration?

In our view, economic integration encompasses three pillars; market Integration, infrastructure development, and continental industrialization. Continental integration efforts are being intensified through the negotiation of the Tri-Partite Free Trade Agreement. Africa is made up of five economic regional communities and these structures are tasked with negotiating a much closer working relationship that will ultimately lead to an Africa-wide free trade agreement with a potential single market of over 1 billion people. Considerable progress has been made in the negotiations, which aim to integrate 26 countries of eastern and southern Africa. This involves a population of nearly 600 million people and a combined GDP of $1 trillion. This market scale could launch a sizeable part of the continent onto a new developmental trajectory. There is a need to redefine and to strengthen our partnerships on the continent toward realizing the vision of an integrated Africa, underpinned by greater levels of intra-Africa trade and even greater levels of intra-Africa investments. African countries need to trade among themselves and there are good programs through various organs of the African Union aimed at promoting trade amongst Africans within the continent and to promote regional integration.

What opportunities are there for investors in African infrastructure?

South Africa’s imports from Nigeria are comprised of mainly oil and gas. Since 1999, there has been an increase in the number of South Africans multinationals operating in the Nigerian market. Currently, there are estimated to be more than 100 South African companies doing business in Nigeria. The biggest investment by South African companies in Nigeria has been in the telecommunications sector. Statistically, Nigeria is the biggest source of tourists, contributing about 84,589 arrivals into South Africa in 2013. Nigeria alone contributed about 64% of the total tourist arrivals from the West Africa region in 2013. Lack of access to trade-enabling infrastructure on our continent is a fundamental challenge. There is increasing recognition that Africa’s integration and intra-Africa trade cannot be realized without concerted efforts to invest in Africa’s infrastructure and manufacturing sectors. We have an extensive infrastructure development program championed by the heads of state and government through the Presidential Infrastructure Championing Initiative. We want to continue building infrastructure such as roads, railways, bridges, dams, and airports to make it easier to travel around the continent. The African heads of states have committed themselves to continue building cross-border infrastructure to unlock growth and development on our continent. In addition to a focus on trade-enabling infrastructure, it is our firm belief that this approach will unlock a large number of investment opportunities on the continent and set us on a prosperous path to growth. On average, Africa has experienced steady economic growth as a bloc over the past decade, a factor that has brought increased attention by other regions.

How is South Africa working with Nigeria to improve regional security?

Africa has adopted a framework document on Agenda 2063, which is our shared vision of the Africa We Want, containing aspirations of our peoples and governments. We want to work together to find solutions for many of the challenges facing the continent, including security. We are concerned with the escalation of the threat of terrorism on the continent, and especially the ruthless attacks by Boko Haram not only in Nigeria but also in neighboring countries. However, the collective response from the region is encouraging. In this regard, South Africa supports the five-country regional Multi-National Task Force involving troops from Nigeria, Chad, Niger, Cameroon, and Benin to fight against Boko Haram insurgencies. It is our wish to see the African Union assume its central role in resolving crises to avoid repeating our mistakes. It is therefore important that we strengthen the African Peace and Security Architecture (APSA). The most critical part of this architecture is to improve the African Union’s preventive diplomacy and its capacity to translate early warning information into early action so as to avert crises from escalating. It is also important that constant attention is given to the countries where interventions have been successful as these countries are at their most vulnerable and have the potential for relapse into conflict. We should therefore strengthen our support for Post Conflict Reconstruction and Development (PCRD) on the continent by mobilizing resources before looking to others, and South Africa and Nigeria have been key in realizing these efforts.