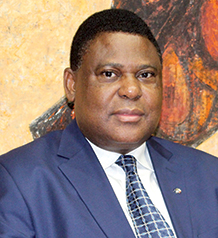 Ernesto Gove first joined Banco de Moçambique in 1976 and has held various positions in the Foreign Department, the Currency Issuing and Treasury Department, the Credit Department, and the Center of Documentation. In 1991 he was appointed Executive Director and Member of the Board. He graduated in Economics from Eduardo Mondlane University and has a Master’s degree in Finance Economics from the University of London. He was appointed Governor of the Banco de Moçambique by Presidential Decree on July 25, 2006.

Share on:
TBY talks to Ernesto Gove, Governor of the Banco de Moçambique, on macroeconomic management, financial inclusion, and cooperation with other international banks.

What role does Banco de Moçambique play to meet the demands of a resource rich economy?

Macroeconomic management is a challenge in a country rich in natural resources. We propose better options regarding the use of assets derived from natural resource exploration and monitoring of external debt. We promote the balanced use of monetary and foreign exchange market instruments to ensure absorption of liquidity deriving from external resources inflows. We want to see an increase in the participation of key enterprise sectors in the stock exchange, so we foster actions aimed at revitalizing the capital market. Additionally, through subsidized loans, the Banco de Moçambique facilitates increased productivity in sectors with high wealth and employment potential as well as supporting diversity in the economy by backing micro, small, and medium enterprises. We want to deepen risk-based supervision and Basel II principles and contribute to the creation of a private credit management information center.

What is your assessment of the evolution of macroeconomic and financial indicators in Mozambique?

Inflation has been low and under control. Though it increased to 2.95% in 2013 from 2.18% in 2012, it dropped to 1.1% in 2014. The Banco de Moçambique has been implementing an aggressive monetary policy, which maintains positive real reference interest rates contributing to a stable exchange rate and the constitution of international reserves. Last year the metical depreciated against the dollar by 5.5%, after 1.5% depreciation in 2013. Net international reserves are on the rise, increasing from $2.605 million in December 2012 to $2.882 million in December 2014, which represents four months of imports of goods and non-factor services. The GDP is not being subdued and has been growing at average rates greater than 7% over the past five years.

From your recent visit to Beijing, how would you describe the possibilities for cooperation with the People’s Bank of China?

There is great potential to expand our cooperation with the People’s Bank of China. Both banks signed a Memorandum of Understanding to promote mutual efforts in various domains, including banking and financial supervision, research in areas of mutual interest, and capacity building of staff in the banking sector. During the visit, our delegation held meetings with entrepreneurs from many business fields in China, who expressed their interest in cooperation between the two countries.

What are Banco de Moçambique’s strategies for improving accessibility to banking services in rural areas?

The Mozambican Government and the Banco de Moçambique have taken a number of measures to increase access to financial services and products. We have updated the Law of Financial Institutions to work towards increasing the total number of financial institutions and to improve the classification system, especially for micro-bank and micro-finance operations. Since 2007 we have initiated various incentives to support the opening of institutions in districts deprived of bank representation, for example a lowering of the minimum capital. The Banco de Moçambique has become a member of the Alliance for Financial Inclusion. In a study on costs of financial intermediation, we found them to be high compared to countries in the region. To reverse the situation Banco de Moçambique adopted a notice in June 2009, which establishes a common nomenclature on commissions and bank charges and encourages better definition of policies and makes transparent costs and conditions underlying financial products and services, as well as a definition of a set of minimum free services. Since the beginning of the financial sector deepening program, the impact of these measures appears to be significant. From a group of 12 banks, 274 bank agencies, 83 micro-credit operators and territorial coverage of 34 districts in 2007, there were 18 banks, 572 bank agencies, 285 micro-credit operators and 69 districts covered by banking services in December 2014.

Financial education is a key factor in the strategy for the development of Financial Sector 2013-22. How is the Banco de Moçambique acting to promote dissemination of knowledge and protect consumers?

To respond to an increasing need in Mozambique for consumer protection population and for financial services and products in general, in October 2014 we launched the Banco de Moçambique Financial Education Program (PEFBM). The program will be implemented in two phases, 2014-16 and 2017-22. It will involve a number of strategic actions involving government entities, media partners, commercial banks and financial institutions, in general, as well as the national and international partners committed to this cause.