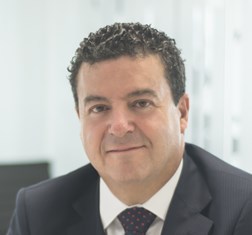 Jesús Sancho was appointed Managing Director Middle East in March 2014, after having joined the company as Regional Director in 2011. Sancho started his career in the Aeronautical (The Boeing Co., Seattle, US) and Airport Infrastructure sector (Ferrovial, Spain) but he shifted to the infrastructure industry in 2008. Since then, he has been based in the UAE and has been developing large-scale water & wastewater treatment and seawater desalination projects in the Middle East, Africa and Australia. Sancho holds a Master Degree of Aeronautical Engineering from Universidad Politécnica de Madrid and an Executive MBA Diploma from IESE Business School, also in Madrid.

Share on:
“ACCIONA seeks a continuously growing business in the GCC for 2019 and 2020.“

ACCIONA Agua, leading a consortium with partners Marubeni Corporation, Abdul Latif Jameel-CDC and Rawafid Alhadarah, recently won the project to build the new Shuqaiq 3 desalination plant on the Red Sea. Could you tell us more about this project and your involvement?

ACCIONA Agua is delighted to be awarded with this relevant desalination plant by the Saudi Water Partnership Company (SWPC) and along with our top-tier co-developers. This is a key project for Saudi Arabia as part of the Vision 2030 program. The project is a very large (450MLD or 100MIGD) seawater reverse osmosis (SWRO) desalination facility launched by the SWPC as an Independent Water Project (IWP) to develop, design, build, operate, and maintain the plant for a period of 25 years. The marine works, the SWRO plant, a 380Kv electrical substation, a high voltage overhead transmission line, the product water tanks and the connection with a nearby pumping station comprise it. The goal is to provide potable water to the city of Abha. ACCIONA Agua is very committed to best serve the country in its quest for the National Transformation Program and we are proud to be part of the second largest SWRO plant under a PPP scheme and the third largest single facility of its kind in Saudi Arabia. Our Company is already mobilizing on the site and starting the works to reach our target.

ACCIONA Industrial and ACCIONA Ingenierí­a also have permanent facilities in the Kingdom, while ACCIONA Energí­a has agreements with local investment funds for renewable energy projects and with additional presence of ACCIONA Construcción. Could you tell us more about your current set-up in Saudi Arabia, and your primary expertise?

ACCIONA has several permanent establishments here in the last five years. We have offices in Riyadh and Jeddah from where we are attending the Saudi market. ACCIONA is a worldwide developer of infrastructure, be it transportation, water treatment, renewable and conventional power, or hydraulic energy. We are also experts in those public services that can improve the quality of life of those countries and cities where we operate. We aim to replicate the success achieved in more than 30 countries in the KSA and in as many verticals as possible. This is the reason why we have decided to have a permanent a long-lasting presence in the Kingdom. Saudi Arabia is the largest market in the GCC and we are eager to participate in any exciting projects such as NEOM, Qiddiyah, Red Sea Project. and the other main ones envisioned by the Saudi leaders. Our expertise is in the development of complex infrastructure and to participate in the whole value-chain from A to Z. We strive to improve through value-engineering and optimization in the design at any project that we work on based on our more than 75 years of experience in this field and highly qualified team of professionals.

What do you anticipate to be the potential of renewable energy in the Kingdom, what options do you consider most feasible, and how can ACCIONA support the Vision 2030 objectives to bring more renewables into the energy mix?

ACCIONA sees great potential for our Company concerning renewable energy projects in Saudi Arabia The Renewable Energy Project Development Office (REPDO) within the Ministry of Energy, Industry and Mineral Resources (MEIM) was established to deliver on the goals of the National Renewable Energy Program (NREP) in line with Vision 2030. REPDO and MEIM have recently launched Expressions of Interest (EOIs) for seven solar PV projects with a combined generation capacity of 1.51GW during the launch of the National Industrial Development and Industrials Program (NIDLP). The announcement represents the next phase in Saudi Arabia’s ambitious renewable energy plans, which seek to achieve over 25GW of wind and solar power generation in the next five years, and close to 60GW over the next decade; of which 40GW will be generated from solar energy, with a further 16GW of onshore wind. The Kingdom aims to create over the next decade a global hub of renewable energy capability upwards of 200GW, spanning the entire value chain from local manufacturing to project development, domestically and abroad. These impressive figures are the reason why ACCIONA is definitively going to be a key player here.

Given the sheer size, output and reserves, the petroleum industry is still the bread-and- butter of the Saudi economy. From your perspective, how can this raw material wealth be utilized to drive the economic diversification in the Kingdom?

An oil price boom from 2003 to 2013 fueled rising prosperity in Saudi Arabia, which became the world’s 19th-largest economy. However, the Kingdom should no longer grow based only on oil revenue and public spending. The present ever changing global energy market and a demographic transition will lead to a bulge in the number of working-age Saudis by 2030. A deep transformation of the economy based on higher productivity could enable Saudi Arabia to again double its GDP and create as many as six million new Saudi jobs by 2030. Eight sectors are envisioned under the National Transformation Program (NTP) to have the potential to generate more than 60% of this growth opportunity: mining and metals, petrochemicals, manufacturing, retail and wholesale trade, tourism and hospitality, healthcare, finance, and construction. All stakeholders, including the private sector, foreign investors, including ACCIONA, and households, will need to be involved in this transformation to make it a success.

What are your strategic priorities and ambitions for the coming year?

ACCIONA seeks a continuously growing business in the GCC for 2019 and 2020. We are primarily focusing in the KSA and the UAE but we will also dedicate special attention and resources to the rest of the GCC countries and Jordan. We are eyeing upcoming opportunities announced in the railway network across the GCC as well as some specialized utility projects such as Waste-To-Energy (W2E) or Pumped Storage Projects (PSP) or “water lifting” where we believe that can add great value to the market.