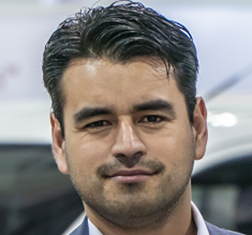 Jorge Burbano was appointed to his current position in July 2016, along with the establishment of BYD in Ecuador. Prior to this, he was the undersecretary for climate change at the Ministry of the Environment. He has a bachelor’s in commerce from the Netherlands and a master’s in business and management from the University of Plymouth, UK.

Share on:
“The largest electric bus production factory in the US is BYD’s, located close to Los Angeles.“

What made BYD decide to establish its operations in Ecuador?

BYD focuses its economic activities on four main areas. The first is electronics; BYD is one of the largest suppliers of electronics, and some of its clients include Samsung, Microsoft, and Toshiba. The second area is energy storage; BYD started in 1995 as a battery company, with triple AAA batteries. Five years later, it had 20% of the world’s market share. The third segment is solar panels and LED light, while the fourth is transport, including electric vehicles, monorails, and a small segment for gasoline cars. BYD is a multinational company specializing in eco-efficient technology. The largest electric bus production factory in the US is BYD’s, located close to Los Angeles, and we have other factories in Brazil, Hungary and France. We place quality before price. We also have country managers in many countries in Latin America. BYD trusts local talent; we can only be successful, if we work with locals. In 2016, BYD decided to come to Ecuador because it saw the potential in three areas. 90% of electricity comes from hydropower, and if we add electric vehicles we complete the entire green cycle. The country has high subsidies for fossil fuels; however, these are not sustainable. Thirdly, Ecuador was one of the most advanced countries in terms of providing incentives for electric mobility in Latin America. For example, there were no taxes on electric vehicles, 0% VAT and customs, and special prices to charge these vehicles.

Could you tell us more about your projects for the electric taxis in Loja and electric buses in Guayaquil?

The city of Loja issued a regulation that stated all new taxis in the city had to be electric. We started with 35 units and would be distributed by a public tender. We gained massive recognition for this, and people realized this technology is feasible for Ecuador. We then moved on to the buses in Guayaquil, which were especially designed for Ecuador. That was the initiative of a small urban transport company but was extremely visionary. We now have 20 buses for Guayaquil. This encouraged policymakers, and they started to create new policies. We have signed an MoU with the national government. We want to create a factory here; however, we need a sustainable demand. BYD requested 300 buses per year to set up the factory. Demand of conventional buses is 1,500-1,900 per year, so it is about 20% of the total demand in the country. We established a roadmap with the ministry of production to determine what is needed to achieve sustainability, such as 0% VAT and 0% customs for electric buses as well. We also made a commitment to work with universities to get human resources, technology transference and to bring buses to do test drives to convince the operators. Right now, we have a special electricity rate for the buses; we pay USD0.06 per kWh if we charge at night. We are working with National Financial Corporation (CFN) for a special credit line for electric buses. However, we need a national electric mobility strategy, such as in other countries. We also implemented the first public charging station in the country, located in Loja. We have 12 employees: nine in Quito and three in Loja. When the buses arrive, we will open an office in Guayaquil with seven people. By the end of the year, we will have 19 people. The company is investing in the country by employing locals and in total has invested USD3 million in 2 years operation. We are still missing the sustainable demand and are working on it. We have done well, because we have an operator in Guayaquil that is purchasing the electric bus fleet. In Quito, there is also an operator ready to buy 60 articulated buses to decarbonize a whole corridor for buses.. Most public transport in Ecuador—about 95%—run by private operators. Only one company, Empresa de pasajeros, in Quito is public, and the Metro Quito will also be public. This makes it harder to sell these buses, because private companies look after their returns. As long as the diesel is highly subsidized (USD1/gallon), it is hard to convince private operators to go for electric cero emission buses. Hence the Government should consider a support those bus companies that goes for electric buses, because they will help to save diesel subsidies and improve air quality in the cities Ecuador should make public transport a country strategy priority.

Aside from public transport and taxis, how do you envision improving sustainable mobility for consumers?

Our cars have 400km range, and we need 28 fast chargers to cover the main cities. We already have experience with the taxi chargers in Loja, so we know what we need. We have noticed that even if electricity rates are low, the stations are not profitable right now because we have a small fleet; it will be a business if we have a larger fleet. That is why there should be a national strategy to include this. The promotion of both vehicles and stations should be done at the same time; l. The total benefit for electric buses is savings plus sales of electricity. For example, in 15 years these 3,000 buses mean a benefit of USD832 million, including the energy sales. We are a USD country, so we cannot print our money. Our production capacity is 300 buses per year, 300 direct jobs, a direct investment of USD60 million, and a long-term investment of USD300 million for the factory. It can be scaled up for the production of electric trucks. Another issue is that in Ecuador, that if a company has a credit line that is 100% more than its assets, it has to present a guarantee of 120%. For the past project in Guayaquil, the operator has assets for USD100,000, and the project is USD8.5 million, so it needed to present a guarantee of USD11 million. A local operator is not able to provide such collateral.