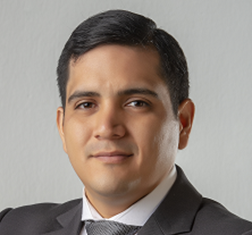 Jose Antonio Hidalgo was appointed as President of the Chamber in January 2017, after sitting on the board since January 2015. From 2010 until 2013, he served as Executive Director of the organization. He is well-versed in Sino-Ecuadorian relations and founded two work division Annex Asia which serves as machinery trader & Asia Surveyors as inspection agents a Chinese firm that with the two divisions provides services and business links between the two regions. He obtained a trilingual bachelor’s degree in International Business Management from Universidad Catolica de Santiago de Guayaquil (UCSG) and obtained his Masters in International Relations from Peking University. Jose is still active in academia, as a professor for entrepreneurship at UCSG.

Share on:
“Ecuador’s sales of shrimp have grown a lot and 50% of Ecuador’s production goes to the Asian market, with the majority going to the Chinese market.“

How would you describe the relationship between private parties and public interests in Ecuador and China over the past few years?

The development of the relationship started in 2007 and continues to progress strongly. Apart from this, the government has a new initiative to open up to partners across the world. For example, in recent past, US-Ecuador relations have strengthened and Ecuador has opened up its commercial relations with the EU. As a country, the more we open up, the more partners we can seek out for investment or different loan options. One of the main reasons for developing these relationships is to establish a commercial agenda. Ecuador has developed an investment and project agenda, but over the last 10 years most of the relation was on a public and political level, with less involvement of the private sector. We believe the relationship should take a step in this direction, attracting real Chinese investment. Ecuador has around USD3 billion in FDI from China, ranking eighth in the region for Chinese direct investment. However, those figures don’t match other capital flows that are worth around USD50.2 billion. In terms of the commercial agenda, we have limitations as a country in order to export to China. The basic limitations are the distance of 70,000km and obvious cultural differences. As a country, Ecuador can only export two products to China: bananas and mangoes. We do not have a trade permit for other types of products because the country has not negotiated this over our 10-year relationship with China. This is not predominantly a technical issue, rather a political decision. If a commercial agenda is put forward on the state level, trade could be opened up within six months. For example, Mexico achieved this and now their commercial agenda is an important part of the Mexico-China relationship.

How do you assess the potential for continued opening up between the two countries?

The Minister of Foreign Trade is doing a good job by opening up new markets and being open to different proposals. The Minister of Finance is also doing an amazing job by opening up different options for financing. This is positive for us because at the Chamber, we have around 300 members from various sectors and the export companies are looking for opportunities within the Chinese market. While trade can be improved on many fronts, there have been significant improvements. Ecuador’s sales of shrimp have grown a lot and 50% of Ecuador’s production goes to the Asian market, with the majority going to the Chinese market; Ecuadorian shrimp has grown in its reputation as a brand of excellence in the Chinese market. That is great, but these markets have to be grown through a strong, strategic platform that allows them to stay strong. We also have to diversify into other products. In comparison, Chile holds 72% of China’s fruit import market and that market is set to grow over the next 20 years, up to around 60kg per capita per year. This is because Chinese consumers prefer imported fruits that come from Latin American countries, Africa, or Southeast Asia—regions that don’t face high pollution levels. Ecuador should take note of this perception and look at how Ecuador’s neighbors are working based on this trend. Ecuador needs to capitalize on its exporting strengths and the handling of direct international investment.

Other than food and fisheries products, what other sectors are of interest for trade between Ecuador and China?

We have to focus on tourism. Ecuador as a country has a lot to offer to the Chinese market in terms of another type of experience. Other countries have had their different agencies work together to create packages for Chinese consumers. These countries budget to attract the biggest influencers and bloggers within Chinese social networks to their country to experience it. Ecuador has to make use of the potential presented by the 100 million Chinese tourists that travel every year. It requires a strategy that works through Chinese social media. Therefore, you need public and private sector involvement to be aligned.

What is the Chamber’s agenda for the coming year?

We are an institution with 20 years of experience and we have built programs for new business with China as well as import-export events. Also, we want our member companies to be prepared in terms of understanding the market perception and risks; hence, we help them with various tools, such as Chinese digital marketing training. Moreover, we hold various networking events with institutions and companies, and we assist commercial missions in visiting Chinese companies and trade fairs. At present, we have 90 Chinese companies that are looking to invest in projects in Ecuador. These Chinese companies are eager to network with the public and private sectors in Ecuador. Due to obvious cultural and language barrier, we do face challenges in attracting the Chinese management to get involved in our forums and networking events. In order to tackle these, we deploy “Ping Pong Diplomacy,“ holding table tennis games to break the ice and get people talking. In 2018, we are also holding an E-China Day because we want Ecuadorian companies to see the importance of e-commerce in China, which has grown by over 28.5% over the last year; we want them to know about the different kinds of platforms and options they have as exporters.