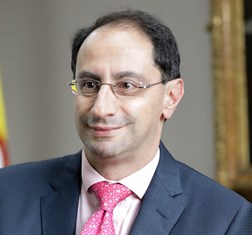 Minister of Finance and Public Credit,

José Manuel Restrepo is an economist and finance specialist from Universidad del Rosario, with a master’s in economics from the London School of Economics, senior management from INALDE, and a PhD in management of higher education institutions from Bath University. He was the former minister of trade, industry, and tourism. As well, he served as rector of Universidad del Rosario and Colegio de Estudios Superiores de Administración (CESA). Earlier, he held the rectory of the Business Foundation of the Bogota Chamber of Commerce. In addition, he was manager of financial planning and budget at Fonade. He was also a professor of macroeconomics, microeconomics, economics introduction, and planning and management control in the faculties of economics, jurisprudence, and business administration and in the postgraduate course in finance at the Universidad del Rosario.

The Medium-Term Fiscal Framework (Marco Fiscal de Mediano Plazo) projects 6% GDP growth for 2021. What is the framework based on and what policies should accompany the economy to support businesses, while seeking sustainability?

With the Medium-Term Fiscal Framework, we present the Triad of Solutions (Triada de Soluciones) that the country requires across three areas: social, economic, and fiscal. On the social front, we must act to reduce the incidence of poverty and extreme poverty and promote a scenario of less inequality in income distribution. To this end, we seek to extend, until December 2022, the Solidarity Income program (Ingreso Solidario), which has been the main tool delivering resources to the most vulnerable Colombians during the emergency. On the economic front, we need to revitalize the productive apparatus, accelerate the recovery of the labor market, and strengthen the business network. In the Social Investment Bill, we are proposing that the PAEF payroll subsidy be implemented from July through December 2021. We also propose its coverage be extended to include employees who hire two or more workers. Additionally, we are evaluating the implementation of a scheme that provides incentives for hiring young people (18-28 years old) or other individuals who earn up to three times the minimum wage. This scheme is projected to have 459,000 beneficiary employees. Finally, in terms of fiscal policy, we face challenges to initially stabilize public indebtedness and then start to reduce it to prudent levels. To this end, we must consider measures to increase the nation’s revenues permanently, although these policies should not have an effect in the short term, such that it negatively impacts the process of economic reactivation. In this context, and with these policies in mind, we expect to reach that 6% GDP target in 2012, being cautious and generating the confidence that will be paramount to reducing the level of indebtedness. This is our conservative growth estimate, given the economic results that we have seen to date.

What characteristics should the social investment policy in Colombia have? What projects and campaigns are part of it?

Currently, social investment has to move around the protection of the most vulnerable and the generation of employment. During the drafting of the Social Investment bill, we have received several ideas and comments surrounding the need to create jobs, not only from businesses with which we have spoken, but also from the beneficiaries of social programs themselves, who say that despite receiving these subsidies, they would like to work, start a business and be able to advance based on their own merits. In addition to the Solidarity Income, with which we expect poverty levels to decline to pre-pandemic levels, this bill contemplates the PAEF payroll subsidy focused on micro and small businesses, as well as a stimulus for the generation of formal employment and a series of incentives for access to and promotion of public higher education.

Net FDI is estimated to represent 3% of GDP in 2022. What’s being done to attract foreign investment? What makes Colombia stand out as a land of opportunity?

Historically, Colombia has shown great macroeconomic stability, as evidenced by the fact that it has only faced one episode of GDP contraction between 1980 and 2019. That, together with our institutional strength, has given us a track record that proves that we are a reliable country regarding our economic management. This is a country that handles its finances and commitments with the utmost care. This has allowed the Colombian economy to attract foreign investment, even under conditions of recession. Specifically, of the major economies in the region, only Colombia, Brazil and Peru had net capital inflows in 2020 (excluding the accumulation of reserves), which prevented a further contraction of domestic demand. In that sense, if we manage to maintain sustainable economic growth and secure investor confidence, foreign investment will continue to arrive showing trust in our capacity as a country.