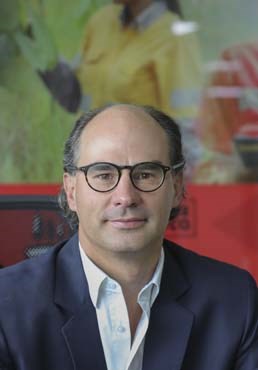 Juan Camilo Nariño Alcocer is an economist with a master’s degree in public affairs and citizen participation. His professional experience includes high-level positions in the public and private sectors. As the vice-president of ANDI, he led the functioning of the sectoral chambers, the trade agreements negotiations with Europe and South Korea, and the regulatory strategies for each one of the country’s economy sectors. Nariño was co-chairman of the Pacific Alliance’s Business Council during its constitution and negotiation process. He also worked for the Organization of American States-OAS in the peace negotiations with the United Self-defence Forces-AUC, and between 2002-04, he served as Anticorruption Zar.

ACM helps companies in Colombia reach the global best practice standards that ensure mining is carried out in a way that is harmonious with communities and the environment.

During 2021, mining grew 10.4%, marking the second semester of double-digit growth. How do you evaluate the state of Colombian mining and to what do you attribute the positive performance?

Growth is the result of a consolidation of the mining sector in Colombia. As you said, we grew by 10.4%. The mineral-specific focus is also important, where for example, in terms of gold, last year in Colombia we produced 2.5 million ounces of gold. In 2021, the figure was 1.5. million ounces—we grew by 1 million. The country is also making important strides in other minerals such as nickel and coal. Favorable market conditions and a mining ecosystem supported by the government and strong guarantees is propping up activity. Colombia ranked first in the Fraser Institute’s mining attractiveness index in Latin America, which is positive in terms of attracting investment.

How is government contributing to the investment attractiveness of Colombia, and what role does strong jurisdictional guarantees play within that development?

Investment in exploration grew up to USD130 million. The government has been working hard with the private sector in coordinating exploration public policy. You cannot have exploration without private sector enterprise, without new investments in the sector. In a country of huge potential and mineral endowments, the regulatory framework must promote activity in a way that allows the development of that potential. ACM works heavily in the promotion of the sector through innovative strategies such as the mining rounds. And taking care of due diligence previous to the offering of titles goes a long way in expediting processes and making investment more attractive.

What tools and strategy does the association focus on to support the development of mining in Colombia?

The public discussion in Colombia and worldwide revolves around the standards and protocols that frame mining activity. Over the past two years, ACM has focused on improving and putting in place all the Colombian sustainability standards in order to certify, and qualify the companies that are producing in the country. In order to be competitive, ACM helps companies in Colombia meet the global best practice standards that ensure that mining is carried out in a way that is harmonious with communities and the environment. Delving into the theme of sustainability; the association has a program called TSM that monitors mining operations along nine protocols. Those are the same standards that the industry follows in Canada, Australia, and Norway. It closely follows matters of water, biodiversity, climate change, health and security, mine closures, tailings facilities, and that is one of the most important steps that this sector is doing over the coming years. We are the only sector in Colombia to practice such self-regulation to improve our operations.

What is the unique role of mining within Colombia’s economic development and how do you envision the evolution of the industry going forward?

The mining sector in Colombia amounts to 2.0% of the GDP. With more exploration and interest from large international players, the sector is forecast to reach between 2.2% and 2.4% of GDP. That means that the mining sector is one of the most important pillars of the domestic economy. The average annual spillover by the mining sector in Colombia is between COP13 or 14 billion, for example in services or other components of the Colombian economy. Therefore, investments companies make in the region are important in supporting local economies and contributors.

How can mining remain competitive in terms of exports in tomorrow’s economy?

The Paris Agreement, the climate change commitment, relies heavily on mining. For example, with increased copper demand, Colombia has a role to play in terms of strengthening output. Colombia is home to the largest untapped reservoirs of the mineral. The country, therefore, has to improve exploration efforts and invite companies to invest in local copper production.