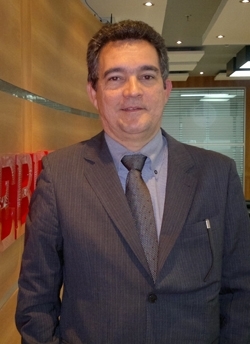 Born in 1965, Eleuberto Antonio Martorelli graduated with a degree in Civil Engineering and later obtained a Master’s in Finance and also an MBA in Brazil. He has more than 20 years of professional experience, working on and managing major infrastructure projects in Brazil, Ecuador, and Peru. With 23 years at the Odebrecht organization, he is currently the President of Odebrecht Colombia.

Share on:
"The assigning of risk in this project has been well defined."

What is the role of Odebrecht in the Magdalena River project, and how did it collaborate with Valorcon to bring about this project?

We are a global company, so when entering new countries, we always find local partners. This enables us to better understand the communities in which our projects are based. For the Magdalena River project, we searched for a partner that had broad experience in the execution of infrastructure projects, as well as knowledge of the area in which we were going to operate. For example, we chose Valorcon, which is from Barranquilla, to develop projects such as the Cartagena-Barranquilla highway. It seemed appropriate to maintain such a strong association for the Magdalena River project. This is of great importance for us, as we always aim to transfer our know-how and technology to local companies.

What are the synergies between your two main projects in Colombia, the Ruta del Sol and the Magdalena River?

We have the synergy of the same structure we put in place for both projects; despite the fact that they are radically different. We could even have used the same office location in Barrancabermeja to reduce costs, but there are other elements such as the fact that we will be in charge of these two projects for some 13 years, and that both are infrastructure projects of importance in boosting Colombian GDP. This is a challenge and responsibility for us, and one that we are more than happy to take on.

“The assigning of risk in this project has been well defined.”

How will the Magdalena River project contribute to making Colombia a more competitive market?

It will reduce transport costs significantly. Some studies show that the transport sector will save up to $200 million annually thanks to the Magdalena River project. It will also contribute to the reduction of carbon gas emissions, and many companies will opt to transport their goods on the Magdalena River. Additionally, many towns along the river will also benefit from such a major project. All in all, Colombia will improve its competitive edge as a result of the project. In fact, the impact of this project will not only be economic, but also social. It will generate job opportunities for local communities, and will contribute considerably to their development.

What differentiates this project from other public-private partnerships (PPPs)?

The assigning of risk in this project has been well defined and apportioned between the state and the private sector, which has encouraged more applications for the tender. We must comply with several requirements to win this project, but I think potential social and environmental risks have already been mitigated. The state will not be financially involved in the project until all completed functional units are delivered. It has done a great job and all the rules have been clearly set out. In this context, Odebrecht’s technologies and capabilities give us confidence with regard to the fulfillment of our responsibilities in this historic venture.

What have been the main challenges facing the projects Odebrecht has already completed in Colombia?

We are about to start executing work on the Magdalena River project. One of the main advantages of this project is that all of the considerations related to environmental and social licenses have already been resolved, whereas in projects such as the 4G-highway between Cartagena and Barranquilla, we faced many problems due to these issues. The main challenges we faced in this country so far have had to do with licenses. Of course, every project has its own particularities and in each of them you get learn new lessons that help you to avoid problems in future projects.

The country has a robust law for PPPs that encourages the private sector to push their projects. Odebrecht decided two decades ago to start investing in infrastructure, and the Magdalena River project is the best example of this. PPPs are a good way to develop key infrastructure projects, and I think that the private sector sometimes does not need to expect anything from its public counterpart, as such projects are not necessarily the responsibility of the public sector. Colombia has a unique opportunity with the PPP scheme, but the country has to make sure that the law is applied and respected, and that everybody knows their rights and responsibilities. The 4G road infrastructure project is one of the largest in the history of Colombia, and that in itself demonstrates the opportunities it offers to foreign investors.

What are some of the projects Odebrecht has targeted for the near future in Colombia?

We have analyzed certain private initiatives and targeted public sector projects in the water treatment sphere, and also regarding the Bogotá underground, a project that in my opinion requires private sector participation. We are also looking at certain urban highways in Bogotá and other cities. However, the Magdalena River is one of the largest projects for Colombia over the coming four years, and it is an honor for us to be part of a national project of such importance as we strive to complete our responsibilities as soon as possible and guarantee the unparalleled effect it will have on Colombia’s economy.