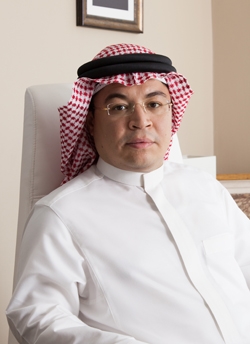 Abdullah M. Al Sayed is the President & CEO of NEXUS Flight Operations Services. He has an MBA from the American University of London, and has held many positions in the sector, including Deputy Chief Executive Officer of National Air Services/NETJETS Middle East.

Share on:
"We want to make sure that we are a connected global company, and that in every country there is a NEXUS representative."

You have grown at a rapid rate since your establishment. What makes your aircraft services offering unique in this region?

What we have is diversity and specialization. For example, I was recently talking with one of our VIP clients as we were in a bid to get his aircraft under management. He called me and said that he was signing with NEXUS. When I asked why he said that, it was because in every area we had a specialist member of staff, which gave him comfort. We are not a one-man-show; NEXUS Flight Operations Services is a team with specific roles. This is what has made us successful with our customers. As far as airlines outsourcing management, our organization is a significant player as well. Airlines save by outsourcing to specialized organizations. That is how we can be cost effective for airlines and government customers.

Who are your main clients?

We had corporate clients, and then we went into low-cost carriers. We do a lot of projects with the government because it has a massive fleet, especially in the Middle East. Most of the governments now use subcontractors, because it is more efficient and allows for higher quality control. The government gets a better quality of service, the service delivery is higher, and the cost is lower. The final thing that we are doing is the cargo business. When we started NEXUS, we said we needed to be diversified, and this has made us unique. We went into the training business, and we recently finished a flight dispatcher class. NEXUS is authorized by the General Authority of Civil Aviation (GACA) to become a dispatch-training center, and it is the only company in Saudi Arabia to currently offer this service. In order to get a flight dispatch license, you have to go to the UAE, Jordan, Europe, or the US. Today, we are doing it here with FlightSafety International (FSI) as our partner, which is owned by Berkshire Hathaway, a Warren Buffet company. We deliver training up to flight safety standards. FSI has been in the business of flight safety for almost 50 years, and it creates flight simulators. When aircraft manufacturers sell you an airplane, they provide you with a training slot at FSI due to its credibility. The program has been running for more than two years and has been extremely successful. The last service that we provide is the Safety and Quality Audit through our internationally well-respected provider Wyvern Consulting.

“We want to make sure that we are a connected global company, and that in every country there is a NEXUS representative.”

What global certifications distinguish you in this market?

Wyvern Consulting is a US company that provides top-level certification to personnel, and is considered the gold standard by operators. We have also become involved with aviation audits through our partners and strategic alliances. We are targeting three markets: China, India, and Africa. We did not target Europe or the US because they are service-oriented markets. We went to places like India because it needs and values our services. India is a very challenging market—the economy is great, growth is high, but it is one of the toughest countries in terms of bureaucracy. We partnered with a local company there that understood the language, culture, and how to deliver services. We decided to be behind the partner, controlling safety, standards, and quality. We established operations in Mumbai, and today we have almost 30 aircraft under support there. India has been very successful and NEXUS was profitable from day one. We started at the end of December 2012, and in 2013 we had done more than 1,100 VIP private flights. The next thing was to go to Africa. Through our contacts, we established a relationship with a partner there, an investment group, and established NEXUS Africa in Kigali, Rwanda. Rwanda is one of the fastest developing countries in Africa, and it is also a hub for the UN. As a country, it has excellent investment rules.

Can you put any numbers on your growth?

We grew from 25 employees in 2012 to 250 by 2013. As a whole group, we now have 1,100 employees. In terms of aircraft, in 2012 we had three under management, and today we have about 23. This is only in the private sector, of course, not including the other aircraft that we support and manage in terms of commercial operations. We also have customers who want to just buy all of their fuel from us, or just get their flight planning from us. We call these ad hoc customers.

What need do you feel that you are meeting in the world, and what trends are you capitalizing on?

There are three things. Number one: I give credit to my Chairman. He owns the whole group’s vision, which is to take the local and make it global. I believe in this vision and have executed it. Number two: everyone complains about the financial crisis in 2008-2009, but I think it was a good thing for us in the end. Only authorities, customers, and suppliers can appreciate how it has cleaned up the market. There are good companies in the region with the right infrastructure, foundations, and support for shareholders, and they stood up and were successful. Number three: The economy in the Middle East, especially when it comes to aviation, has improved. The government of Saudi Arabia, with the all of the investment that the government has put into building new cities and infrastructure, has helped to keep the economy healthy and attractive to investors. When the economy is healthy, it is a good sign. Developments such as the railways, the new cities, the new roads, and the expansion of the two holy mosques have all made a visible impact.

Where do hope to see NEXUS in five years, when many of these new airports are complete?

By 2015, we have to be in China, and the year after in South America. We have already established operations in North America. We want to make sure that we are a connected global company, and that in every country there is a NEXUS representative. We would like to take the company global. At the same time, we have to also keep our standards constant. I lose sleep over this. We do not want to become a massive, heavy elephant whose customers are only numbers. So that is why we sometimes slow down our expansion, to make sure that our team grasps exactly what we need.