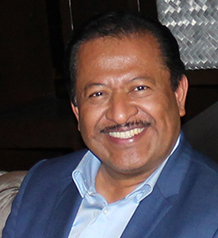 Juventino Cetino Grepo is the CEO of CCIPSA. Previously, he has held such positions as Vice President at SADMX SA de CV, Deputy Finance and Taxation and Financial Tax Planning Corporate Manager at Industries Resistol, SA de CV, and most recently General Manager at CCIPSA.

What have been the most important projects for CCIPSA in the past year?

Our most important project has been the completion of the maritime dock of Salina Cruz in the state of Oaxaca in the southwest. That project received a federal investment of approximately MXN330 million. The dock will provide services for international maritime transport companies and will serve as an important hub for international trade.

What is the importance of the Hilton Coatzacoalcos project for CCIPSA and what expectations do you have for future growth of the project?

Given the location where we are constructing the hotel, it is significant not only for the regional economy, but also for our firm. This hotel is uniquely positioned near the many petroleum complexes in the Coatzacoalcos area. With this hotel, we intend to become leaders in the market for services to executives and suppliers of the more than 40 companies that process petroleum derivatives in the area. Also, it is worth mentioning that in addition to the hotel, we are constructing a residential subdivision with commercial developments in the area to house long-term workers and executives from petroleum projects.

How would you evaluate the success of the energy reforms in terms of the level of international investment they have brought to Mexico’s petroleum sector?

The issue of the energy reform is not a simple one. It has focused on the divestment of the federal government in the sector and the concession of activities in the petroleum and electric energy sectors to private investors. With the impact of the low petroleum prices at the moment, investors have been cautious. To put it more concretely, the energy reform will see its value in the long term.

Of the segments in which CCIPSA is present, which will be the most important source of growth for the company over the coming years?

The projects with the most potential for profitability will be major infrastructure projects such as the mass-transport metro system, highways, toll roads, bridges, docks and piers, and industrial parks. In the long term, we are looking to expand with these same types of projects into markets in Central America.

What are the most important goals and plans for CCIPSA over the medium term?

We aim to conclude our private investments in residential subdivisions, hotels, and the public works projects for which we have been contracted.