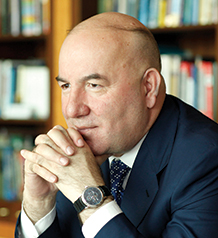 Governor, Central Bank of the Republic of Azerbaijan (CBAR)

Elman Siraj Rustamov graduated from the faculty of Planning of National Economy at the Insitute of Azerbaijan National Economy named after D. Bunyadzadeh in 1973. After this, he attended a post-graduate course between 1975 and 1978 and then attended the Institution of Doctoral Candidacy in Moscow in 1990-92. He began his professional career as an Economist for the Scientific Research Institute of Economy under the USSR State Planning Committee in 1973, before becoming the Head of the Economy Department for Baku Fine Broadcloth Union of the Ministry of Light Industry of the Azerbaijan SSR in 1978. After this, he became the Chief Economist for the Scientific Research Institute of Economy under the State Planning Committee in 1980-90. He held numerous positions at different institutions before becoming the Chairman of the Management Board of the National Bank in 1995, which he held for three terms of five years. In April 2015, he was appointed the Governor of the Central Bank of the Republic of Azerbaijan for a five-year term.

Share on:
TBY talks to Dr. Elman Siraj Rustamov, Governor of the Central Bank of the Republic of Azerbaijan (CBAR), on new regulatory reforms, the development of the non-oil sector, and the possibilities for the banking sector's development.

The World Bank’s 2014 report on Azerbaijan has welcomed new regulatory reforms. How would you assess the development of Azerbaijan’s economy in 2014, and what has been the primary role of the Central Bank in supporting economic growth and initiating new reforms?

Economic growth was 2.8% in 2014, primarily driven by the non-oil sector, which posted 7% growth. Overall, our national economy has grown about 28%, and the non-oil sector has grown 57% since the onset of the 2008 global economic and financial crisis. The economy is being successfully diversified. The non-oil sector accounted for over 63% of GDP in 2014. The targeted policies conducted in the framework of the declared Industrial Year made a positive contribution to high production in the processing industry in 2014. High economic growth of the non-oil sector resulted in over 100,000 new jobs, as well as over 82,000 permanent jobs. The Central Bank’s conjuncture surveys suggest that the Consumer Confidence Index remained high. Investments to the country economy amounted to AZN17.6 billion with 66% contribution to the non-oil sector. Consumer spending rose 12% in 2014, and the size of commodities sold in the consumer market jumped 10%. The Central Bank survey among households also suggests that the Consumer Confidence Index remains high. The country’s foreign position strengthens with sustainable economic growth. In 2014, the current account of the balance of payments of Azerbaijan had a significant surplus. The size of export prevails over that of import by 2.4 times. Foreign exchange reserves further increased 2% or AZN1.2 billion up to AZN51 billion in 2014, which constitutes about 70% of GDP. Our country has been in the top 20 in the world for several years in a row in terms of this indicator. Strategic foreign exchange reserves exceed the external debt by eight times; sufficient to cover three-year commodities and services import. Currently, the Azerbaijani economy accounts for 75% of the overall economy of the South Caucasus. World Bank estimations suggest that per capita GDP in Azerbaijan surpasses the global average indicator by 19% and the average indicator of middle-income countries by 77%. In 2014, the Central Bank targeted single-digit inflation and financial stability of the banking sector, and a higher role of banks in economic growth. Macroeconomic stability in the country is the key to tailoring high competitive ratings of Azerbaijan. Azerbaijan has been in top 10 in terms of macroeconomic stability for several years in a row. The exchange rate policy is targeting macroeconomic sustainability and competitiveness of the country in light of the situation with the balance of payments. Banks kept capitalizing, and the Central Bank exercised tighter supervision of lowly capitalized banks. The banks’ aggregate capital has doubled from $2.7 billion up to $5.5 billion since the capitalization decision (August 2012). The size of capital of banks, owning 99% of sector’s assets surpasses $63.7 million. The highly liquid banking sector meets its liabilities and executes settlements on an uninterrupted basis. The system’s instant liquidity ratio prevails at more than twice the threshold. The qualitative indicators of banks assets are satisfactory. In 2014, the banking sector, which concentrates 90% of financial system assets accross the country, continued to deepen financially. The sector’s assets rose 23.5% and reached 78.4% of GDP. Currently, the financial depth of the Azerbaijani banking sector corresponds to that of the countries with a medium-sized banking systems. Over the reporting year, the bank took a number of regulatory measures in light of the existing dynamics and potential risks in consumer loans. Accordingly, the growth rate of consumer loans YoY decreased 1.9 times to 21%, and dropped to 15%, if mortgage loans are skipped, while the absolute volume of car loans declined by 33%. The share of consumer loans in the lending portfolio in Azerbaijan lags behind the average indicator for EBRD countries. Around $123 million worth of mortgage loans were issued in 2014, as a result of which the lending portfolio of the Azerbaijan Mortgage Fund currently is $803 million, with mortgagors numbering 15,800. Assigned banks, insurance companies, appraisers, and the Mortgage Fund are integrated into the E-mortgage system now. The Central Bank did not overlook the development of e-services, which is critical in expanding access to financial services. Currently, 23 banks render internet banking and 15 banks offer mobile banking services. Confidence in the banking sector was much higher in 2014. Corporate deposits increased 36% to $10.6 billion, while deposits of the population rose 12.4% to $9.2 billion. Deposits of individuals in manat increased 14%. Deposits in regions jumped 13.5%. There are 473 depositors per 1,000 people in the country. Per capita deposits reached $970, and bank accounts of individuals number 6.4 million. Interest rates continued to drop, aided by additional actions by the Central Bank.

HE President Aliyev announced that 2015 is to be the Year of Agriculture. What prospects does this sector hold and how can CBAR support it?

More attention needs to be paid to the agricultural sector of the country this year in terms of goals of the Azerbaijan 2020: Vision into the Future development concept and in diversification of the non-oil sector. Agricultural reforms underway have paved the way for dynamic growth of the sector. The agriculture sector entered a new quality phase by determining strategic goals and institutional changes to the development of agriculture. Expansion of the financial sector and easier access to loans have played a crucial role in the growth of the agriculture. Bank loans to agriculture have increased 18 times over the past 10 years. NBCIs also actively support the sector through loans. The broader regional network of banks and NBCIs significantly enhanced access of agricultural businesses to financial services. Actions by the Central Bank to increase the role of the financial sector in economic diversification, as well as measures to stimulate business lending by credit institutions will further contribute to development of the agricultural sector. The CBAR will continue active cooperation with government and international financial-credit institutions on measures to expand lending to the agricultural sector.

What steps have been taken by the CBAR to strengthen the transparency of financial institutions in the country?

The Bank has set a requirement on disclosure of actual annual interest rates for consumers of banking services for comparability purposes. The application of this instrument advocates more transparent banking services to customers and promotes healthier more competitive environments. A new methodological framework on responsible lending has been developed to strengthen the transparency in bank-customer relations, which aims at determining behavioral standards of banks, eliminating negative business practices, and increasing social responsibility of credit institutions.

What is the potential for the development of Islamic Finance in Azerbaijan’s financial sector?

Islamic Finance has recently become more popular not only in Muslim nations, but also in western countries. However, some countries have not yet decided whether to apply Islamic finance. Thus, the implementation of Islamic banking in the traditional banking context requires a dedicated legal framework and regulatory environment. There are no unified regulatory principles for Islamic Finance in a global setting so far. In order to develop Islamic banking, a necessary regulatory base should support it and the regulative framework be adapted to the specifications of Islamic banking products. In terms of universal banking growth, Azerbaijan is also studying the relevant practice of advanced economies, and consulting with foreign experts and partners. The key goal here is to study application perspectives of Islamic banking, determine the demand for this segment, and measure its economic effectiveness.

What is your outlook for the opportunities provided by the First European Games in Baku?

The inaugural European Games will attract the attention of world to Azerbaijan, once more manifesting this country’s great role in advocating sports. The Games, as well as other sports events in Azerbaijan, will further boost the country’s reputation and ensure a much faster attraction of foreign investment to the country’s non-oil sector. Moreover, the visit of a large number of sportsmen, guests, and tourists to Azerbaijan, where supreme human values such as dialog among civilizations and multiculturalism are of utmost importance.Baku has become one of the most beautiful cities of Europe, manifesting cultural values of both East and West in its ancient and modern features. Participation in this spectacular sporting event will further stimulate the development of tourism.