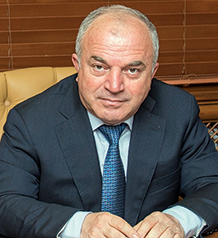 King of the Road

Kamil Aliyev was born in 1961 in Baku. He studied at the Engineering and Construction Institute of Azerbaijan during the 1978-1983, graduating with an honors diploma and entered the postgraduate course in 1983. From 1991-1995, he worked as director of Scientific Research Laboratory at the Azeravtoyol Production Union. From 1995-1999, he worked as General Director of AzVirt Joint Venture. From 1991 to 2001, he worked in the capacity of Director of Road-Construction-Repair at the Head Production Office under Engineering Communications Department of Baku City Executive Power. In 2001, he was appointed to the position of Executive Director of AzVirt.

Share on:
TBY talks to Kamil Aliyev, Executive Director of AzVirt, on the White City, the European Games, and international activities.

Azerbaijan 2020: Outlook for the Future is the country’s national target. In reaching this goal, what role will be played by construction and by AzVirt itself?

Within the development concept of Azerbaijan 2020: Outlook for the Future, the country’s road and transport infrastructure will be brought in line with international standards through the widening and completion of roads of national importance. The construction of new roads will be carried out with the principle of ensuring the population’s security; the construction of intra-urban and inter-urban car parks will be accelerated; relevant infrastructure will be improved; and an intelligent system of transport management will be implemented in large cities. The public transport system in the capital and other cities, districts, and villages will be significantly developed. The country’s railway system and air transport systems will improve, and we will work on the balanced development of the regions as well as the progress of tourism. One of the most important projects within this is Baku’s White City project. The area, located in the center of the Baku Bay, covers an area of 221 ha and was once known as the “Black City,” because it was completely unusable from an environmental point of view, due to oil operations that were carried out without regard for environmental regulations. In accordance with the new development project, a modern and large residential settlement is to be established in what was the most environmentally unsuitable area, polluted with oil and oil waste. We have also planned office buildings, shopping centers, parks, and a boulevard, which will link the new residential area with the sea. The social infrastructure of Baku’s White City will be state of the art. Our company has been entrusted to construct streets and roads within Baku’s White City project.

The 2015 European Games are a monumental occasion for Azerbaijan. What has AzVirt done to prepare Azerbaijan for the games?

Games of the Olympic level have not been held in Azerbaijan before. Many infrastructure projects have been executed in the city related to the European Games. Most of the events will be held in Baku’s Olympic Stadium, situated on the eastern coast of Boyukshor lake. The construction of the Hasan Aliyev Street-Ziya Bunyadov Avenue-Olympic Stadium motorway, which is being executed by our company, will provide a safer and more convenient link to the Olympic Stadium. Main sections of the road will have six lanes while the others will have four. The project requires the construction of two bridges, two tunnels, two pedestrian bridges, and passageways. The main aim of the project, which is part of the State Program, is to provide a road traffic route from all directions leading to Koroglu Metro Station, both to the city center and to Ganjlik Metro Station, via Hasan Aliyev Street. By also creating easier access to international-category highways for vehicles from Baku settlements, the new highway will ease traffic in the city center.

The European Games are attracting a certain amount of international attention. What opportunities can AzVirt look to take advantage of in the future as a result?

The planning and dynamic development of Azerbaijan throughout the last 20 years gave the country an opportunity to grow on the international arena, politically and economically. The opportunity for Azerbaijan to host the European Games will contribute to the development of relationships with European countries. With this in mind, there is the potential for participating in international road construction projects in the future.

With an increasing presence abroad, what contribution can AzVirt make to the strengthening of international relations?

AzVirt has branched out to new subsidiaries in Eastern Europe. In countries such as Romania and Serbia, we are undertaking highway construction projects. Our projects include the construction of highway E763 between Beograd to Juzni Jadran, the highway between Ljig and Preljina in Serbia and the reconstruction of the Bucharest ring road in Romania. They are scheduled to be completed on time and with our customary high quality. Our company takes part in the development of economic relations with these countries and fulfills its mission at the highest levels.