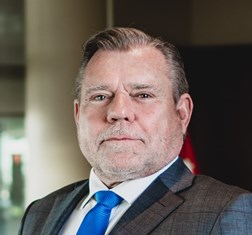 Since November 2011, Kjeld Binger has been responsible for the operational management and delivery of The New Terminal of the Queen Alia International Airport in Jordan’s capital city, Amman. He has than 24+ years of experience in the airport sector. In his capacity as Executive Vice President of Copenhagen Airports (CPH) he oversaw the transformation of CPH to a major regional hub, and as CEO of Copenhagen Airports International, he acquired and operated a successful portfolio of 11 airports globally. Other positions include Chairman and CEO of ASUR Mexico, and CEO of DAE Airports as well as board member of various airport companies. Areas of expertise include business planning, acquisition and operational management of existing airports as well as development of Green- and Brown Field Airports. His main focus has been on development of necessary infrastructure and commercial facilities to supply capacity in due time, constantly taking into account the strong correlation between market development and necessary supply of quality capacity at competitive rates. He is strongly focused on the fact, that high quality in all respects of airport operations is the major driver of best in class profits and long-term development. Quality operation is a key element in positioning the airport relative to market development and price competitiveness among customers.

Share on:
“The investment climate in Jordan is fairly positive and developing strongly.“

How would you sum up the major milestones over the past year for AIG?

The company was founded in 2007 with the sole purpose of bidding for the Queen Alia International Airport (QAIA) concession. This consortium, consisting of six diverse shareholders, won the bid by a margin of less than 1%, so it was an extremely tight competition. The company undertook the construction of a new terminal at QAIA, and the first phase of the construction was inaugurated in March 2013 and the second phase in September 2016. Between 2007 and mid-2016, the company invested around USD1 billion in a new terminal structure. The consortium evolved over time, and in 2017, shareholders started thinking in consolidation terms. Some wanted to exit, and others wanted to increase their holding. Within the last year, Aeroports de Paris (ADP) acquired 51% in AIG, Meridiam, also from France, acquired 33%, ASMA Capital from Bahrain acquired 12.25%, and local investor Edgo Investment Holdings disposed of half of its shareholding down to 4.75%. This has been the most important milestone because this consolidation means that there is a strong shareholder focus on operations rather than financial engineering and investments. ADP is among the biggest airport operators in the world, and it handles more than 250 million passengers per year globally. Now AIG is a subsidiary of ADP, which marks a new era for the organization. Not only is this a huge milestone for AIG, but also for Jordan. We have both outgoing and incoming investors walking out with smiles on their faces because they feel they have made a great deal. This deal is a major milestone in FDI in Jordan, because when private money comes into the country, it has a different weight. Another achievement is crossing the 8-million passenger mark, which is the result of approximately 7% average annual growth in traffic since the inception of the concession in early 2008. In August 2018 alone, we handled more than 1 million passengers. This is remarkable growth for a country like Jordan, especially when we look at the competitive landscape, which includes Dubai, Abu Dhabi, Doha, and Istanbul. We are surrounded by extremely large players, and yet our growth has not slowed down over our 10 years in the country.

How did AIG achieve this success?

AIG brings the money, constructs the infrastructure, maintains it, and rents it to users, which includes all the stakeholders. We make sure all the stakeholders are all aligned and have common goals. These common goals are hammered in granite in our vision: to always be among the 20-best airports in the world among its peers. Our peers include airports that handle between 5 and 15 million passengers. We are working extremely hard to align everyone in this direction so we can maintain our position. In 2016, we were number three in the world, and in 2017, we were second best in the region. We stand a great chance of being the best in the region this year. We are also focused on developing our market and welcome the initiatives from the government with Ryanair. I have always been a strong opponent of high taxes on travel, airlines, and passengers, because they are detrimental to the development of countries. In Jordan, this is a big hurdle. With Ryanair, the government is testing the waters for the model of waiving the JOD20 special tax on each passenger to determine how this could translate into higher GDP and more jobs. The equation could work and needs to be evaluated for the long term.

How would you assess your environmental efforts and becoming the first carbon neutral airport in the region?

When we inaugurated the new terminal, we started a focused approach on reducing our carbon footprint. Airport Councils International (ACI) has a carbon accreditation scheme with levels 1, 2, 3, and 3+. 3+ is essentially carbon neutral, and we are the only airport in the Middle East that has achieved 3+ status. We achieved this without the solar plant we are planning to inaugurate, hopefully, next year. We will inaugurate a 10-MW solar plant, which will contribute 50% of our electricity consumption on an annual basis, and this will reduce our carbon footprint by a great deal. We also recycle rainwater and gray wastewater for irrigation purposes. We are experimenting turning organic waste into fertilizer. Jordan has done a great job over the last five years in these areas. Renewable energy is a major deal in the country currently, and projects are being inaugurated across a variety of areas. The entire investment community in the nation can benefit from these developments.

How are you working to further develop the nation’s tourism and transportation sector?

QAIA does not aspire to compete with the big players in the Gulf, because this would not take us anywhere. We have ambitions to maintain a high level of origin &destination traffic (O&D), because this is what the country really needs. It needs inbound tourism and business. This is where our business has the highest margins as well, so we are strongly motivated to support additional O&D. This is largely related to route development, which is all about giving airlines incentives to start routes into Jordan. We have a much larger potential to develop new routes thanks to our partnership with ADP. This is a strong development, and it will catalyze new growth all across Jordan.

What more needs to be done to further develop Jordan as a transportation hub?

There is one thing that is extremely important for making Jordan a transportation hub, and that is the land-based transportation in the country. Highly efficient, land-based infrastructure supports our business. We want modality because with this comes development and growth. One of the most important investments that can be made in Jordan over the next 10 years is a railway connection between Aqaba and Amman that travels through the airport. I also support this vision of connecting the Gulf all the way up to Turkey via Syria and Iraq. Indeed, this is a major investment, but hopefully we will see greater interest from for instance Asian countries to support Jordan in developing these projects. Geographically, we are well positioned to become part of the distribution hub for Africa, particularly Sub-Saharan Africa. There is a strong opportunity for us going forward, and to support this, it is extremely important to have the modality between the container port, land transportation, air freight, and so on. The potential is there, and the dynamics may work to Jordan’s advantage moving forward. It comes back to the fact that the investment climate in Jordan is fairly positive and developing strongly.