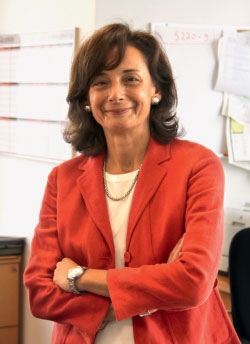 Gloria M. Grandolini was appointed Country Director of the World Bank for Colombia and Mexico in September 2009. Among her responsibilities are the preparation of country partnership strategies, and the programming and delivery of financial and knowledge services, as well as strategic advice, and overall country relations and policy dialogue. Among previous senior positions, she was a Senior Advisor to the Executive Director representing Italy, Portugal, Albania, Greece, Malta, and San Marino on the Board of the World Bank Group. Grandolini holds a PhD. in International Economics, a Master’s degree in Law and Diplomacy from the Fletcher School of Law and Diplomacy, at Tufts University, and a second Master’s degree in Foreign Service from the Edmund A. Walsh School of Foreign Service of Georgetown University.

Share on:
How has Mexico’s fiscal dependence on oil revenue and the US market changed or improved over the past year? On those two points I would note some positive momentum. On […]

How has Mexico’s fiscal dependence on oil revenue and the US market changed or improved over the past year?

On those two points I would note some positive momentum. On the fiscal front the government has presented a reform package that explores alternative sources of revenue to limit the nation’s oil dependence. The proposal that was approved by congress was more conservative, but I think it raised awareness nonetheless. Structural changes in the economy take time, and you will not see major changes from one year to the next. We observe policies, proposals, and signals that are going in the right direction. On the trade front, relations with the US are well established and long standing. One of the first signals that the administration was aware of the importance of this issue was when the Minister of Finance became the Minister of Foreign Affairs.

What are your expectations for the impact of the fiscal reform?

Many areas need addressing for reforms to have effect. I think that the positive aspect of this administration is its recognition of the need and willingness to work in parallel on several fronts. They seem capable of going further than their predecessors on this occasion, although it’s not fully within their power to do so as they require congressional approval.

What are your most important projects in poverty alleviation and rural development in Mexico?

The engagement model that we have with countries of the World Bank encompasses more than loans. We start with the national development plan and agree with the government on priority areas. Based on that we develop a program to establish the optimum instrument in support of the country. This is usually a combination of financial and knowledge products, and the dissemination of global experience. There are four areas on which we are focused and our strategy for Mexico for the next six years starts with productivity. We are working with the financial sector, competition, and innovation. The focus is on how to support smaller companies. The second area is related to increasing social prosperity. We are working with the government on offering second-generation social protection, and Mexico is known to be proactive on this issue. The third major area concerns strengthening public finances and government efficiency. This is closely related to enhancing service delivery, particularly at the local level, and to working with states.

What are your expectations for education reform and its likely consequences for future generations?

There are two main issues to address here: the quality of education and the links between the education system and the labor markets. Implementation will be very important, and highlights government recognition that education plays a major role in reducing poverty. We share the government’s concern that national labor productivity has risen by just by 2% over the past 20 years, compared to more than 60% among its competitors. Up to 40% of Mexican employers say they have difficulties in filling job vacancies for want of qualified people. Most of these reforms will take some time to take effect, but it’s important that this administration is willing to start the process.

Your remit also includes Colombia. What are the main factors behind that nation’s sustainable advance?

Colombia’s economy has been able to withstand external shocks thanks to four shock absorbers: the flexible exchange rate, a very manageable public debt, modest deficits, and a solid financial system. One of the main impacts of the crisis in many emerging countries has been a decrease in the credit extended to the private sector. Yet the robustness of Colombia’s financial system has prevented a duplication of this. The high commodity prices have also helped.