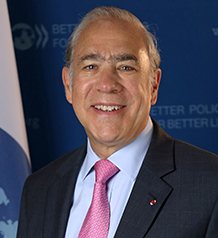 José Angel Gurrí­a came to the OECD following a distinguished career in public service, including two ministerial posts. As Mexico’s Minister of Foreign Affairs from 1994 to 1998, he made dialogue and consensus-building one of the hallmarks of his approach to global issues. From 1998 to 2000, he was Mexico’s Minister of Finance and Public Credit. For the first time in a generation, he steered Mexico’s economy through a change of Administration without a recurrence of the financial crises that had previously dogged such transitions. Secretary-General of the OECD since 2006, he has reinforced the OECD’s role as a hub for dialogue and debate on global economic policy. He holds a Bachelor’s degree in Economics from UNAM, and a Master’s degree in Economics from Leeds University, in England.

Share on:
TBY talks to José Angel Gurrí­a, Secretary-General of the OECD, on pioneering structural reform, monetary policy, and the conditions for inclusive growth.

Mexico is the OECD member nation to have carried out the largest number of reforms in recent years. How will these reforms make the Mexican economy more attractive to international investment?

The ambitious package of reforms known as the “Pacto por México” is aimed at returning the country to a stronger growth path. Major structural measures have already been legislated to improve competition, education, energy, the financial sector, labor, infrastructure, telecommunications and the tax system. Implementation has started in earnest, and if done so to the letter, these reforms could increase trend per capita GDP growth by as much as one percentage point annually over the next 10 years, with the energy reforms having the most front-loaded effects, and the education reforms more lasting effects over the years to come. Further reforms, including that of the judiciary, health sector and agriculture, could raise growth, by an additional one-percentage point, suggesting that GDP growth could reach an annual pace of 5%. This stronger income growth would create a larger and more lucrative domestic market, which combined with ongoing efforts to facilitate market access, would render the market increasingly attractive for international investors.

According to the OECD, Mexico’s GDP will grow 3-4% this year. What do you see as the main challenges to achieving that growth, and how should the country address them?

One main risk for the OECD’s outlook comes from the pace of withdrawal of US monetary policy accommodation, which could trigger market instability. Withdrawal would affect Mexico, along with other emerging market economies and increase long-term interest rates and asset price volatility. However, Mexico’s financial markets showed more resilience during previous episodes than did other emerging markets, suggesting that its sound macroeconomic framework could absorb external shocks. Another risk comes from a possible further decline in oil prices. Though Mexico’s federal budget is well protected in the short term from such decline through various hedging mechanisms, in the medium term it will be significantly affected by lower oil prices, and fiscal adjustment is required. There are also upside risks, notably a stronger US recovery, yet the balance of risks remains tilted toward the downside. This underlines the need to further strengthen macroeconomic fundamentals and maintain financial buffers to better face possible periods of financial volatility.

One of the main challenges of Mexico’s economy is achieving inclusive growth. In that regard, what impact will the reforms have to reduce inequality in the country?

The government has introduced major reforms to make growth more inclusive, reduce poverty and income inequality and encourage operating in the formal sector. Some of these policies build on past measures; such as the conditional cash transfer program Oportunidades/Prospera. Reforms to improve the quality of and access to education will also make growth more inclusive and raise Mexico’s long-term growth. If these reforms reach their full potential, they will help Mexicans to live better lives. It will be particularly important for the programs put forward by the government to provide universal pensions and unemployment insurance be approved by lawmakers. If adopted, they will enhance protection against income losses. Universal health coverage has been achieved with Seguro Popular. However, not all families have access to quality care, making it a challenge for both parents and children to live healthy lives. While giving access to high-quality care to all families will increase health spending, much could be done to improve the efficiency of the current system.

Mexico has developed a large skilled labor force. How has that made it a more competitive and appealing address for international investment?

The Mexican economy is very open to world markets and hosts many modern firms, notably in the sectors of aerospace, automobiles, foods and drinks, which employ highly skilled and well-educated workers. Nonetheless, this accounts for a relatively small part of the economy and is highly concentrated in a few regions. Despite important improvements made in recent decades, Mexico’s educational system needs to do more to increase growth and reduce inequalities. While today nearly all children between the ages of 5 and 14 are in school, the quality of education remains well below OECD average. To address this challenge, the Mexican administration has introduced important reforms, including Constitutional amendments to raise educational outcomes by improving Mexico’s teaching profession. These reforms are only the beginning of a broader and deeper transformation of the educational system that should help enhance the skills of Mexico’s workforce.