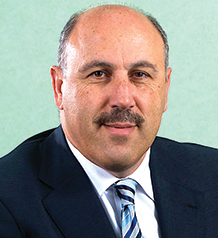 Varouj Nerguizian, Executive Director & General Manager of Bank of Sharjah, graduated with a degree in economics from Université St. Joseph, Lebanon (University of Lyon Lumií¨re, France). He started his career with Bank G. Trad-Credit Lyonnais Beirut, seconded by BNP Paribas he moved to Bank of Sharjah in the UAE in 1977, an affiliate of BNP Paribas. Nerguizian was appointed as General Manager of Bank of Sharjah in 1992. He was instrumental in the growth of the bank, its success and its promotion not only in the UAE, but also in the region. He serves as Chairman and General Manager of Emirates Lebanon Bank, and is a Board Member of Dana Gas PJSC, and Chairman of its Audit and Compliance Committee. He also serves on the Board of Trustees of the American University of Sharjah, and the Conseil Strategique de l’Universite Saint Joseph Beirut.

Share on:
TBY talks to Varouj Nerguizian, Executive Director & General Manager of the Bank of Sharjah, on the interplay between energy markets and the banking sector, offsetting the recent downturn in the market, and plans for the future.

How does the low price of crude oil impact on the bank’s operations?

We used to be very active in the oil trade but we exited at the right time, our activity in is now limited to cash rich companies, and consequently the direct impact of the lower price is limited. However, since the UAE is a major exporter of oil, the revenue of the country has been negatively affected, which has resulted in some projects being frozen and not going through as planned. The lower price will be a temporary issue, and we are now in the $60-70 price bracket, which is high enough to generate sufficient revenue for countries like the UAE. If it continues, though, it might have an effect on expenditure and thus on major projects in Abu Dhabi and Dubai. But the country is rich, even a prolonged reduction will not have a large impact since there is a huge buffer. If anything, the UAE will be affected by the decrease in Russian and Chinese tourists visiting the country, but that effect will most probably be mitigated as well, as the UAE is experienced in weathering the storms of economic crises, as was evident in the 2008 aftermath.

How have you managed to shield the bank from the effects of the 2008 financial crisis?

Most of the banks were affected, but first of all, the government stepped in to help those banks that had liquidity issues, and most of the banks gave back the money after the crisis or converted it into equity. Since we are highly capitalized, we did not need such an option and we returned the money. The crisis affected some of our customers, especially real estate developers, and some customers active in regional trade. All in all, it has been manageable. We know our customers well, and we did not have any that simply ran away or left exposures. Since 1977, we have seen many crises and even wars. Our structure is such that we have always been extremely liquid, and we have from inception used the rule that 30% of our total deposits has to be invested in liquid assets, which is roughly what Basel III states, because we never wanted to be a problem for the government of Sharjah or the Central Bank.

As the bank has gradually expanded throughout the UAE, how would you describe future expansion plans?

There are basically two ways of expansion that are open to us. Either we go for cross border acquisitions and we consider a merger with another financial institution in the UAE. Unfortunately, we cannot undertake cross-Emirates mergers. As of today, we are still preoccupied with consolidating our presence in certain Emirates, which makes a lot of sense. If we really want to grow as a bank, we should look for a merger with a bank that is into retail banking, because it should be complementary to our corporate banking services.