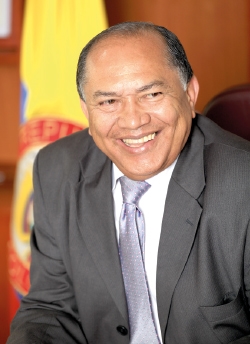 Amylkar Acosta Medina was born in Riohacha, and studied Economics at the Universidad de Antioquia. He was elected to the Assembly of La Guajira in 1980, and as councilor of Riohacha in 1982. He has served numerous times in Congress, and was head of the senate between 1987 and 1988. He went on to become Vice-Minister of Mines and Energy in 1990, having held the presidency of Colgas, the Colombian gas firm. In addition, he has worked as a teacher at the Universidad Externado de Colombia, specializing in mining law.

Share on:
How has oil production evolved in Colombia over recent years? There has been an overriding increase in the production of oil and gas over the last 4 years. In 2013, […]

How has oil production evolved in Colombia over recent years?

There has been an overriding increase in the production of oil and gas over the last 4 years. In 2013, for instance, we had an average of 64,000 barrels per day (bbl/d) more of production than in 2012. Although in 2014 we have seen lower production levels due to social problems, protests and damage to infrastructure, we have managed to raise security levels around oil activities thanks to coordinated efforts between security entities and the Ministry, nevertheless. This has been a great achievement, in which we focused on the prevention of potential attacks. Also, we have improved the environment around oil production and distribution facilities, which is greatly valued by companies. All these actions have been aimed at returning to previous oil production and export levels. Every inoperative day, for example, of the Caño Limón pipeline represents losses of $2.17 billion, revenues that, incidentally, are the main source of financing for oil-related projects in the region.

What have been some of the key measures and actions taken by the Ministry to reduce the effects of social protests on oil industry activity?

It is crucial to strengthen communications between operating companies and the communities that are affected by oil operations. In this context, there is a national strategy of social and regional development in which one of the main objectives is precisely this. We also try to bring to the dialog table all the parties involved: communities, local and regional authorities, and private companies. Also, we have understood the need to listen to the claims and complaints of the local communities in a better manner, and they have appreciated the steps taken. Our goal is to reach long-term agreements that satisfy all parties involved, whereby companies enjoy a better and more efficient working environment in these communities.

What steps have been taken to protect traditional mining activities over illegal mining?

We understood the need to differentiate between traditional mining, illegal mining, and modern mining. In this context, we learnt to give traditional mining a different treatment, offering those participating in the activity an outstretched hand. At the same time, we give no quarter to illegal mining activities and combat this strongly and continuously. Also, we have sped up formalization processes for those aiming to legalize their activities. In addition, we have consolidated mediation tools between small mining activities, including traditional and illegal, and large corporations or large owners of mines. It is important to boost cooperation between these two parties. In fact, we have had a very positive pilot project with Continental Gold, a company that recently signed five cooperation agreements with small mining communities. There have been other pilot projects to fight illegal mining in departments like Cauca, as this type of mining does not contribute to regional development. Again, we have developed several tools to offer these illegal mining activities a chance to legalize, as we know of the importance of government support for this transformation. One of the main goals of the legalization process is to standardize operations and develop them within the right environmental international framework. One of our main efforts focuses on the eradication of the usage of mercury in illegal mining activities.

What are the competitive advantages of the Colombian mining and energy industries for foreign investors?

In 2013, some regional countries saw a reduction in the arrival of foreign investment, something that did not happen in Colombia. Foreign investment grew by 8% in Colombia last year, reaching a record $16.8 billion. A great part of this figure went to the oil and energy industries. This figure also shows the reliability of Colombia as an investment destination, due mainly to political stability in the country, and clear and stable rules of the game. Colombia is a highly competitive country for foreign investors, even more so than other regional superpowers like Brazil and Mexico. Also, our country offers attractive and interesting returns on investment. I think we experienced a highly positive trend in terms of investment and production, and we expect a better economic performance of both the mining and energy industries for 2014 than in previous years. These sectors are set to remain among our key economic drivers, financing the development of other sectors and infrastructure. For example, in 2013 the energy and mining industries represented 28% of tax income for the Treasury, also reaching 31% of current national income.